Interview with Joseffe Cáceres, a cleaner and spokeswoman of Pan y Rosas (Bread and Roses) and the Revolutionary Workers Party in Chile, on the current situation in the country and the politics of the left. 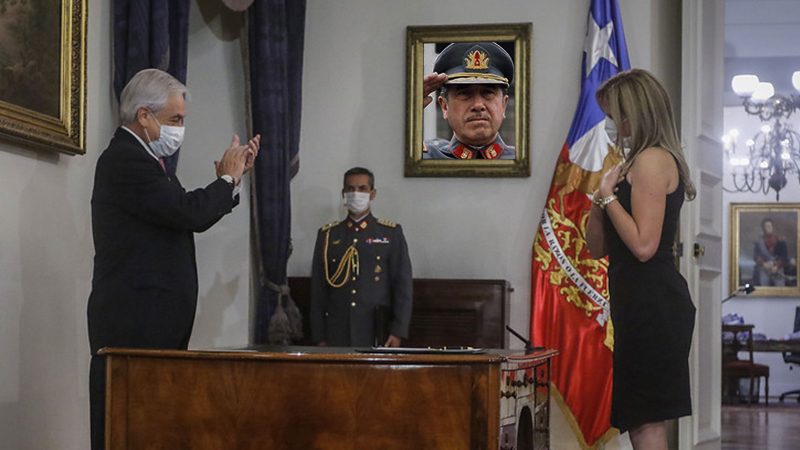 Hello, Joseffe. Thanks for taking the time to be interviewed. Can you tell us something about the national situation in relation to the coronavirus, about the politics of the government, and about the situation of the working class and women?

In the last week, the number of new infections rose to more than one thousand per day, and some hospitals are beginning to collapse. These hospitals are mainly those on the peripheries of cities that deal with poorer communities in metropolitan regions. The exponential rise in the number of infected people came after a scandal involving the health minister came to light. It turned out that cases in which no symptoms were present were not being counted in the official tallies. In other words, the government handled the data as it wanted and hid information in order to make it appear that the infection curve had flattened out. This deception led to more infections and today the health system is on the edge of collapse.

In addition to hiding the asymptomatic positive results, the government failed to carry out mass testing. Quarantine was implemented for only a small part of the population. Workers, male and female, in essential industries continue to be exposed to the risk of contagion. It was only last week that a ban on leaving the home was announced for 80% of Santiago. In working-class and impoverished areas, businesses in non-essential industries remain open. At the same time, it is these very areas that have lower hospital capacities than elsewhere. The community of Puente Alto, for example, where the infection rate is the second highest in Santiago, reports that the hospital is already at 81% capacity.

On top of that, the government has failed to come to grips with the problem of inadequate medical resources. According to the Chilean Society of Medicine, 68% of all intensive-care beds are occupied, a situation which, with an increase in infections and critical cases, could lead to a collapse in the health system.

As in other countries, it is mostly us women who are at the front of this battle. We are the worst hit by the shortage of medical supplies, personal protective gear, and a doubling of the workload. The manner in which the government has handled the pandemic has led to more exploitation and increased exposure to contagion for both us and our families. The first case of death from the virus within the health system was a woman health worker a few weeks ago.

There has been an increase of brutality against women, including murder, a situation which is the direct responsibility of the Chilean government. A few days ago, Pinochet’s great-niece, who remains today a convinced defender of the dictatorship and is both hostile to women and racist, was named Minister for Women’s Affairs.

What is the position of the reform-oriented and centrist parties and of the trade-union bureaucracies?

So far, the Communist Party and the Frente Amplio left coalition reacted by voting for laws such as the so-called “Law for the Protection of Employees,” which in reality serves to secure capitalist profits at the expense of workers’ wages. Firms, including multinationals, are able to use this law to halt wage payments and instead take advantage of unemployment insurance.

The Central Unitaria de Trabajadores, the communist-run trade-union headquarters, for its part, washed its hands in innocence. It called neither for action nor for mobilisation against the government’s plans.

What does Pan y Rosas propose in this situation?

We women from Pan y Rosas took an active part in the revolt and organized ourselves in our places of work and study, particularly in the health sector, such as in the Barros Luco Hospital and in the Antofagasta Emergency and Rescue Committee. After the pandemic hit the country, we have continued to organize and look for solidarity between the workers. In contrast to the completely passive union bureaucracy, we want to show a focus on  resistance against the government and the austerity plans of the companies.

We condemn the appointment of the new Minister for Women’s Affairs. With her appointment, the government underlined its denial of human rights violations of the civil-military dictatorship (in the Pinochet era), which was responsible for thousands of cases of torture, murders and persecution of women and sexual dissidents. Her appointment also legitimises the government’s entire systematic human-rights violations since the mass revolt of 18 October 2019. The appointment is [president] Pinera’s wink in the direction of retrograde and fundamentalist forces in the country and a provocation against the women’s movement and the feminists who resisted the Pinochet dictatorship and in recent years have continued to take to the streets to force through their demands and claims.

This is why we, as a women’s and sexual diversity group, Pan y Rosas Teresa Flores–consisting of dozens of young women, including those working in industry, in education, in the health sector, and in many other sectors–have become part of part of the #NoTenemosMinistra (“We have no minister”) movement, which was created at a national level by various women’s organizations. At the same time, we are fighting for a ban on dismissals from the workplace and the withholding of pay, and for a minimum wage of 500,000 Pesos (about $600 USD), for a halt to production in non-essential sectors, and for companies and factories to switch to producing items for workers employed on the front lines.

We want an end to the killing of women and violence against women, we’re fighting for an emergency plan to combat male violence so that the state provides residential accommodation and compensation at a level to cover both a family’s cost of living and the cost of psychological treatment— all to be financed through taxes on the property industry and on large fortunes.

This interview was originally published on Klasse Gegen Klasse.