Poland Is Building a Border Wall — With EU Complicity

Poland’s murderous attacks on migrants at its border with Belarus haven’t been enough. Now it’s building a “steel curtain” to keep out the victims of a humanitarian crisis created by imperialism. The European Union is on board. 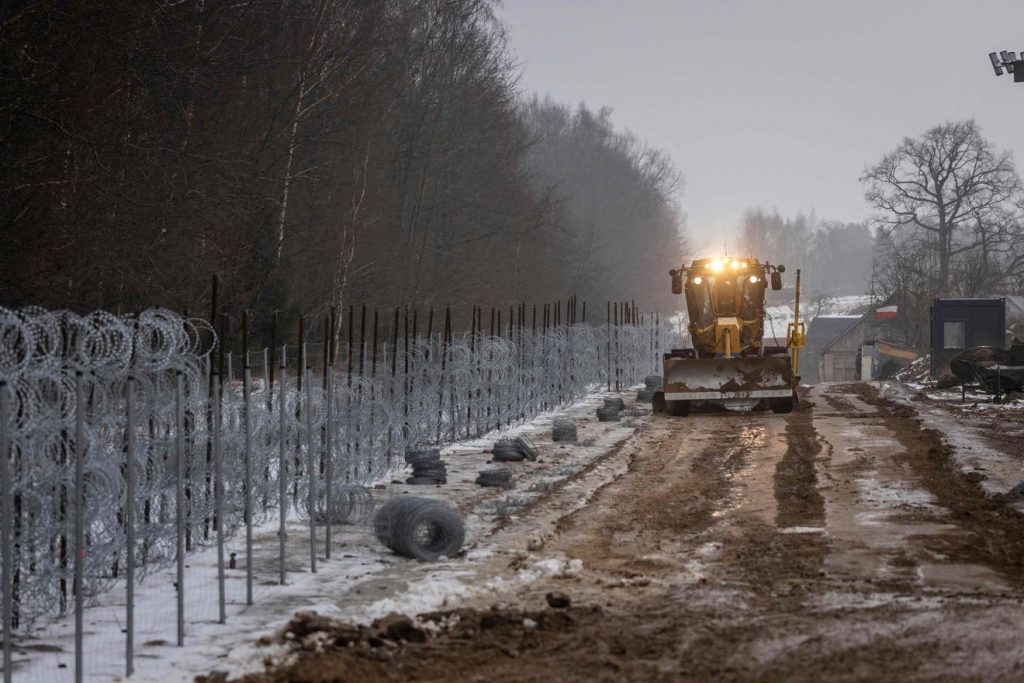 With shades of Donald Trump’s wall on the U.S.-Mexico border to keep out refugees from Central America, Poland has decided to build a 186-kilometer-long (116-miles long) wall along its border with Belarus. It’s already being called the “steel curtain.” The government of President Andrzej Duda is taking one for his European Union (EU) team by implementing a policy that the leading European imperialisms fully support: keeping migrants who are trying to escape war and poverty out of Western Europe.

It is a humanitarian crisis created by imperialism.

Building of the wall, which began on January 25, comes during a period of heightened tensions between Russia and Ukraine — which counts the United States and NATO (including Poland) among its allies. While at this writing the Biden administration seems to be focusing on putting extreme pressure on Russia to avoid a war, the possibility is certainly not ruled out. Such a war would displace hundreds of thousands, if not millions, of people from the countries of the former Soviet Union.

It’s not just about the possibility of war in Ukraine, though. A physical wall is an escalation of Poland’s deployment of army troops along the border last November and December to prevent several thousand migrants from the Middle East from crossing into EU territory. Those migrants, pushed to the Border by the regime in Belarus to put pressure on Poland and the EU more broadly, were subjected to “repatriations” and brutal attacks by Polish — in the dead of winter.

These migrants are victims of a geopolitical game of chess. Belarus has been accused of encouraging migrants to travel to that country; it then forces them to the Polish border to retaliate against EU sanctions against Belarus over human rights and the migrant situation — a sort of vicious cycle. These victims are even being called “weaponized migrants,” a sign of just how dehumanizing the policies of the various governments involved really are, and how little responsibility Western imperialism is willing to take for its own role in creating the problem of large-scale displacement of people in the first place.

Horrific Tales of Degradation and Death

“At least 19 people have died since the beginning of the border standoff between Poland and Belarus,” reported the Guardian last Thursday. “Most of them died of exposure to freezing temperatures.”

In December, the charity organization Fundacja Dialog found a 38-year-old Iraqi Kurdish woman in the forest severely dehydrated and freezing after spending a week in the forest, first in Belarus and then in Poland. “The woman was screaming with pain,” the charity reported. She died from hypothermia and the miscarriage she had while crossing the border, and Polish prosecutors opened a manslaughter inquiry.

In November, a one-year-old child from Syria died on the border. He was found in the middle of the night by volunteers from a local NGO, next to his injured parents who had been unable to keep him warm. The family had been hiding in the forest for a month-and-a-half, terrified of the violence being meted out by security forces on both sides of the border.

The brutality at the Poland–Belarus border is not unlike family separation at the U.S. border, aimed at word getting back to migrants who haven’t yet arrived at the border to stay put. Agata Kolodziej, from the Polish aid organization Ocalenie Foundation, described last November to InfoMigrants that the border guards first take away the migrants’ phones — and then come the “repatriations.”

“Sometimes we help people at night in the forest,” she said, “and then later border guards push them back to the Belarusian side. We have met refugees who have already had six or seven such pushbacks, and still keep trying.”

Koldziej described a crying woman with her small children being taken by force back to the forest on the other side of the border. And she told of border guards entering a local hospital, where they “removed a patient who was being treated for heart problems and sent him back across the border.”

“All these pushbacks are illegal, according to international and EU law,” Kolodziej noted. But, she continued, “the government in Warsaw issued a decree … that declared them legal. And the European Union also doesn’t seem to care about the fact that the law is being broken dozens of times a day at the border.”

Poland’s border wall will make this so much easier for Poland’s repressive forces. And it is being built as part of a barbaric policy — with which the European Union is fully complicit — that explicitly targets innocent children, women, and men who have been forced to flee the very wars waged by the United States and NATO in Syria, Iraq, Afghanistan, and elsewhere.

Last November, the EU itself began discussions about financing the Polish and other walls along the alliance’s external borders. Charles Michel, the European Council president, made the announcement during a visit to Warsaw. It was in part a response to a letter the previous month from 12 EU member states, including Poland, Lithuania, and Latvia, calling on the European Commission to “additionally and adequately” fund physical barriers at the EU’s borders as a “matter of priority.”

Direct funding would be quite a reversal from 2017, when Hungarian prime minister Viktor Orbán asked the EU to pay for half the costs of an “anti-migrant fence” his country had erected in 2015 to stop migrants from Serbia and Croatia. Orbán claimed he had “all but eliminated” such migration and wanted to be rewarded for “protecting” the entire EU. That request was overwhelmingly rejected at the time.

The Wall Is Also an Environmental Disaster

On top of the human suffering the wall will cause, it also promises to be an environmental disaster. It cuts through one of Europe’s most significant wild areas — the Białowieża Forest, which is considered to be one of the last pieces of the primeval forest that once covered the European continent. Part of the forest in Poland is covered by the EU’s own Natura 2000 environmental protection network. And the forest is also a cross-border UNESCO World Heritage Site.

More than 700 scientists on Monday issued a joint appeal to the European Commission calling on it “to take all possible measures to halt the construction of the wall immediately,” stating that it would lead to “permanent interruption of the functional connectivity of the ecological corridors of the Natura 2000 network on the national and European scale.”

The Polish government, though, has exempted the construction from its own water and environmental laws, reports Politico.

Katarzyna Nowak, a University of Warsaw geobotanical researcher, told National Geographic that the wall would “block migration routes for many animal species, such as wolves, lynx, red deer, recovering populations of brown bears, and the largest remaining population of European bison,” which would have “wide-ranging impacts, since the Polish-Belarus border is one of the most important corridors for wildlife movement between Eastern Europe and Eurasia, and animal species depend on connected populations to stay genetically healthy.”

Polish authorities have responded with cynical statements aimed at reassuring anyone concerned about the effects of its wall. Captain Krystyna Jakimik-Jarosz stated, “We will do everything to ensure that the damage to the environment is reduced as much as is possible.” In other words, not very much.

What Path Forward to End the Crisis?

The wall is slated for completion by June. In the meanwhile, Poland’s state of emergency at the border continues, which restricts access to the area for journalists and aid organizations, leaving the brutality of its armed forces with few witnesses other than the migrants whose phones have been confiscated.

There is little hope for a reversal of this path toward more border walls and more brutality at the borders. Anti-immigrant sentiment is continually whipped up across Europe, migrants are used as scapegoats for all sorts of ills created by capitalism, and attacks on them become ways to divert attention away from other things. France and England have been playing a murderous game with the lives of migrants crossing the English Channel; why would we expect these more “advanced” capitalist countries to care about migrants in Poland and Belarus?

As long as there is capitalism and imperialism, there will be wars that create these “humanitarian crises” migration and forced displacement. The solution lies not in appealing to the good graces of the European Commission or the humanity of the U.S. government or the forces of any of the belligerents in Russia, Ukraine, and the NATO states. Borders are, in themselves, acts of violence.

Right now, the greatest hope for migrants is the active solidarity of the working class and the oppressed across the Europe, in a great continental movement to fight for the rights of all migrants, including their unrestricted, immediate access to all countries — with papers, families kept together, no pushbacks or deportations, and residency permits, jobs, and access to education and healthcare for all. Ultimately, it is only a global fight against the system of profit and exploitation that imposes and maintains the borders that will bring lasting relief to the millions who are forced to flee their homes each and every year, across the globe.