Police are Not Essential Workers

As most facets of daily life in NYC grind to a halt due to COVID-19, racist police violence against Black and brown New Yorkers on the subway continues. MTA workers who are organizing for their own safety in the face of high rates of infection could join those necessary calls to demands that would keep all New Yorkers safe. The NYPD is inessential during a pandemic and at all times. 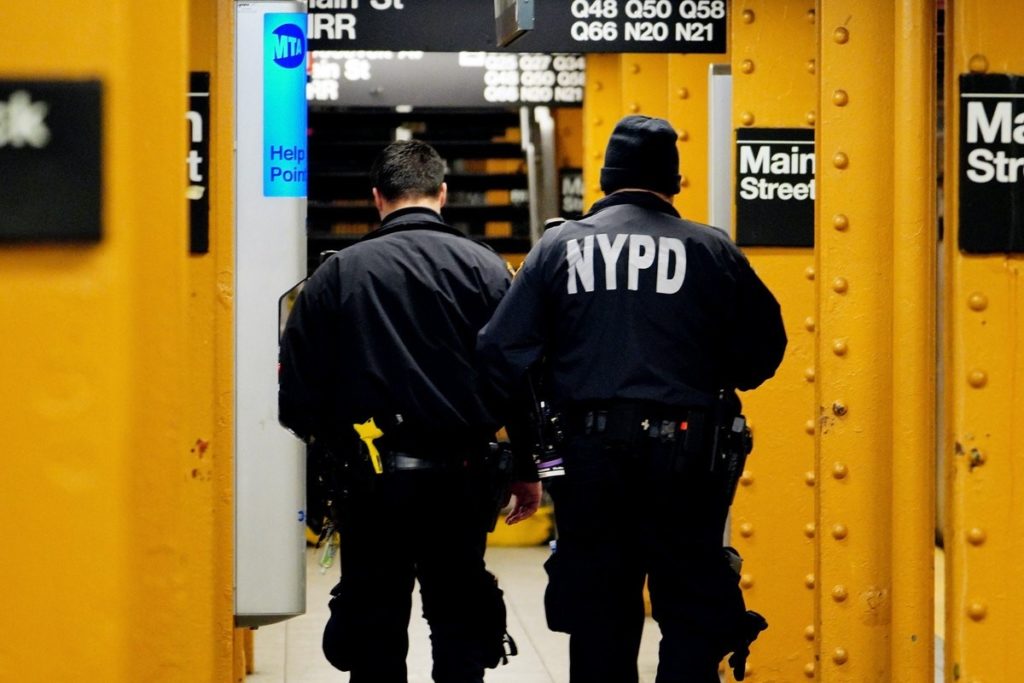 Cell phone footage taken on April 11 at the 145th St station in Harlem shows a small boy, likely no older than 10, surrounded by at least three uniformed police officers who detained him, kicked away the chips and candy he was selling, and dragged him up the stairs as he cried and onlookers protested. This sight of the NYPD swarming a person of color as they attempt to use the city’s public transportation is shocking, violent, horrifying, and all too common.

No one, especially a child, should ever be arrested for selling snacks to commuters. Twitter user @AliaMalika20 retweeted the April 11 video, saying the boy pictured was her son. She explained that her family was homeless and him selling snacks was currently their only income.  At a time when 16 million Americans are newly unemployed and nearly a third couldn’t pay rent last month, the idea of arresting people for criminalized acts of survival becomes even more absurd and heinous than usual.

Even before COVID-19, racist cops on subways in New York were a major problem. Faced with a systematically underfunded and inaccessible subway system, New York City and state officials decided last fall that the problem was turnstile hoppers, often young and poor people of color attempting to get to school and work in the only way they can, and people like the boy in the video who are selling food without a license. Rules and regulations around food selling licenses in New York City are structural mechanisms of racism. Similar laws prohibit busking without proper licenses. All of these laws are racialized and meant to protect “proper businesses,” meaning capital owned by predominantly white people. The NYPD exists to protect capital and to enact the antagonism of the bourgeoisie against racialized working class communities. This leads to violence against homeless people, turnstile hoppers, vendors, and all “undesirable” people using the MTA. The “solution” offered by those in power was to substantially increase the number of cops in the subways. The result was predictable and tragic, leading to an increase in violence against Black, Latinx, and Indigenous New Yorkers while doing nothing to address the actual problems that subway riders or workers face.

Currently, the problems faced by Metropolitan Transportation Authority (MTA) workers include dying at some of the highest rates in the city, as the subways and buses continue to run and workers are not given PPE. More radical sectors of the Transport Workers Union Local 100, the union that represents thousands of subway and bus workers in New York City, are making demands of their bosses that include “no PPE, no work” and enforcing social distancing on trains and buses. While these demands should be supported and met, they could and should go further. The union could tie their current demands to demanding for hotels for homeless people, so that they don’t have to sleep on the subway, and increasing checks and unemployment insurance for the most vulnerable so that people would not have to rely on precarious sources of income such as selling snacks on subway platforms during a pandemic. Additionally, asking for enforcement of more rules, even well-intentioned rules like social distancing measures, begs the question of who does the enforcing and what that enforcement looks like. Given the history and reality of rule enforcement on the MTA, it will probably look a lot like three uniformed police officers traumatizing a small child. In order for these demands to truly keep New Yorkers safe, they must take into account the brutality of the NYPD. Instead, MTA workers could call for a committee of subway workers, riders, and others who use the system to maintain the safety of everybody using the MTA during and after the pandemic.

The NYPD’s existence, let alone presence on public transportation, is unacceptable at any time, but it’s even worse during a pandemic. For one thing, on top of the usual brutality that the police inflict on the poor and racialized, now the police are vectors of infection. With nearly 1 in 5 cops out sick with COVID-19, it’s safe to assume that any officer on the street is a potential carrier. While many essential workers, such as doctors, nurses, food workers, and MTA workers, have equally high levels of infection, this is an avoidable tragedy of capitalism that could be averted with proper PPE and accessible healthcare. However, the police are non-essential, brutalizing people and infecting them. At the time of the arrest, they send people into New York City jails, which are a potential death sentence at any time but spell death even more immediately now, as inmates on Rikers and elsewhere have tested positive and even died from COVID-19 at disproportionately high rates.

In order to keep New Yorkers safe both in this time of crisis and after it is over, especially those who are working class and racialized, we must make clear who is essential and who is not, and the police are non-essential. Abolish the police, abolish the prisons, and destroy all the racist and capitalist structures they grew from.