On Sunday, 2,000 people gathered in Friedrichshain for the traditional “LL-Demo.” They were brutally attacked by police, who made 35 arrests. The justification was absurd. The responsibility lies with the SPD and Die LINKE. 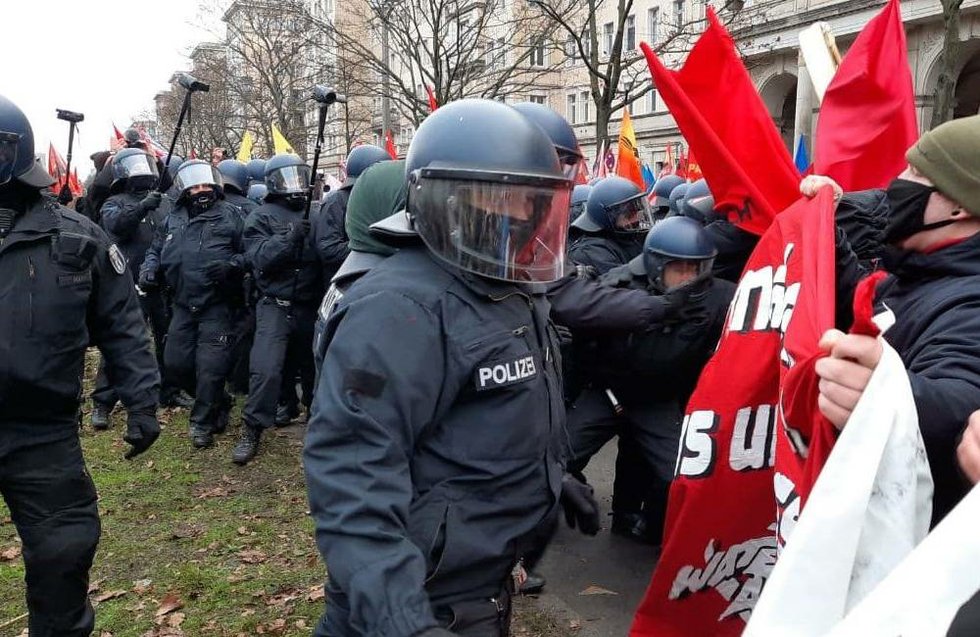 On Sunday, 2,000 people gathered in Friedrichshain for the traditional “LL-Demo.” Rosa Luxemburg and Karl Liebknecht, the two founders of the Communist Party of Germany (KPD), were assassinated 102 years ago, and are always remembered on the second Sunday in January. But before the demonstration could start moving, riot cops attacked people with pepper spray and batons, and arrested 35 people.

The annual commemoration for Luxemburg and Liebknecht, hosted by Die Linke, was moved back to March 14 due to the pandemic. That is when up to 100,000 people, many of them retirees, will go to a cemetery in Friedrichsfelde and lay down red carnations. But there is always a separate demonstration running from Frankfurter Tor to the cemetery. This LL-Demo is made up of the German Communist Party (DKP), the Marxist-Leninist Party (MLPD), the “Communist Platform” of Die Linke, and numerous smaller groups, including Maoists from Turkey who only seem to come out once a year. Anarchists, Antifa and national liberation groups also come along, making this kind of a fever dream for reactionaries.

The LL-Demo on the second Saturday in January has taken place since the mid-1920s, with only a brief interruption in the Nazi period. In East Germany, millions of people would come to the demonstration. This year, the organising committee of the LL-Demo debated extensively whether it should take place — demonstrations are, after all, still allowed. They eventually decided, by one vote, that it should, following all required hygiene measures. Lefties have always liked wearing masks, even back when it was prohibited, and they were maintaining social distance — until, that is, the police violence forced them to link arms.

What was the justification for this attack? Supposedly the police wanted to remove the blue flags of the FDJ, the Free German Youth. That was the official youth organisation of East Germany, with over two million members — including Angela Merkel. Now there are just a handful of nostalgic activists with a theatrical bent. And according to the police, they are a verfassungswidrige (anti-constitutional) organization, making this violence necessary.

But as anyone who has ever attended the demonstration can attest, the FDJ is there every single year without fail. The FDJ was founded in both halves of divided Germany, but it was prohibited in the Federal Republic of Germany in 1951. Has this ban suddenly gained a new urgency in 2020? Has the FDJ gained such strength in the last year that it represents an imminent threat to the Liberal Democratic Basic Order of capitalist Germany? If so, I hadn’t noticed.

But it’s much worse than that. Because it was only the West German FDJ that was prohibited in 1951. When the Federal Republic swallowed up its Eastern neighbour, it did not retroactively prohibit the mass organisations. The SED, after all, lived on as the SED-PDS, the PDS and, now, Die Linke. So the East German FDJ — with the same name, logo and blue shirts as its Western counterpart — remains legal. It is all very confusing and even lawyers aren’t sure. I remember at one demonstration many years ago, the police attacked the FDJ right when we crossed the former border from East to West Berlin, thinking the FDJ was only banned in the former West.

These days, as I have written in previous columns from Berlin and Leipzig, police are very explicit about letting more questionable demonstrations break the law. Berlin’s interior senator, Andreas Geisel from the SPD, has declared: “I can’t go after people with a water cannon because they aren’t wearing a mask.” But he can go after them with pepper spray because of a blue flag? A Leipzig police official justified non-intervention against corona denialists thus: “We have to consider that our means are proportionate, and the use of force was not appropriate for us here.” And what is proportionate against the Left?

At the LL-Demo, the Berlin police claim they were attacked with flag poles, fists, bottles and firecrackers. All I can say is that none of that appears on any of the numerous videos on social media. All I can see is police attacking a demonstration because of a few flags that are there every year. As soon as they stopped, the demonstration went all the way to the cemetery without incident. Was this really, as the police press release argued, a left-wing mob itching to kill a cop?

There is a sense of historical poetry about the police attacking a commemoration for Rosa Luxemburg. She was murdered by far-right, state-sponsored thugs under the orders of a social democratic government. It’s kind of an honour for her followers to face the same capitalist violence. Not long before her assassination, Luxemburg wrote that she would “hopefully die at [her] post: in a street battle or in prison.” And she did. She would certainly be proud of people facing down the armed guards of the capitalist state.