Minnesota is a Blue State. Where is the “Lesser Evil” Now?

The murder of George Floyd is not just the responsibility of the police. State violence is a constant in Minneapolis, a state governed by Democrats. The Mayor Jacob Frey has worked together with the Governor Tim Waltz to repress the current protests against police brutality and racism. 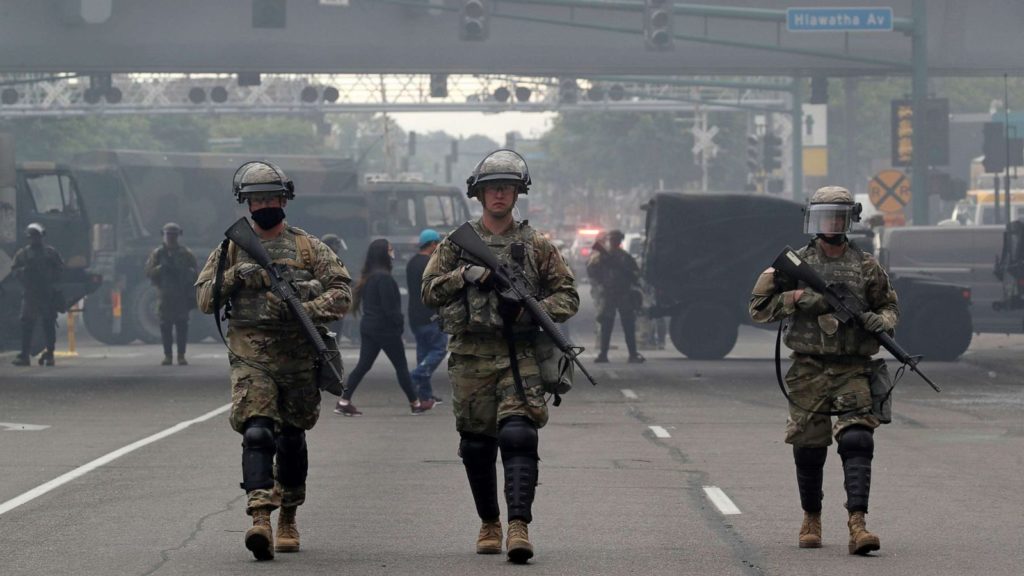 The brutal, racist murder of George Floyd by the Minneapolis police has sparked a wave of outrage, protests, and a political crisis in the city. The four cops involved in the killing were fired by the Minneapolis Police Department and, after two nights of enormous pressure from the streets,  Derek Chauvin, the officer whose knee was on Floyd’s throat, was arrested. But the demand for justice has not yet been fulfilled: three of the four cops on the scene remain free, and the responsibility of the MPD chiefs has not been investigated. Minneapolis Mayor Jacob Frey, a progressive Democrat, has publicly called for the killer cops to be arrested. He has not, however, hesitated to allow the deployment of the National Guard by Minnesota Governor Tim Walz, another Democrat, after the protests on Wednesday night.

The deployment of these security forces has failed in silencing the protests, which continue to take the streets and have gained the support of unions, social organizations and political activists. The response of Democrats to protesters has been to declare a curfew and enable the police to perform massive arrests. Now, Waltz has announced that he will fully activate the National Guard to stop the demonstrations.

Through the week, Minnesota police protected the home of the murderer, Derek Chauvin, and that of Michael Freeman, the Hennepin County Attorney who would finally decide on the arrest of the cops. Both homes were surrounded by protesters, demanding justice for George Floyd.

The is not an isolated case. Both Chauvin and Tou Thao, another cop at the scene of Floyd’s murder, have a long history of police abuse. A couple of years ago, Chauvin was a part of a group of police officers that shot an indigenous man. The Minneapolis Police Department had kept these officers on force for years, until it was inconvenient to do so: they were fired    after videos of Floyd’s murder went viral. While the Mayor and the Police Department maintain that police officers must follow protocols, in practice, they have a free hand for abuse and crime against the most vulnerable. The Police Federation and the Attorney General have asked for patience while the case is investigated.

Former Presidential candidate and current Joe Biden’s Vice Presidential hopeful Amy Klobuchar is also connected to this case. Although the Minnesota Senator appears to be demanding justice for Floyd, having made several public statements to that effect in the last few days, her rhetoric doesn’t hold up to scrutiny and is nothing but a farce.  Klobuchar has built her political career on the foundation of her experience as the County Attorney of Hennepin County, the Minnesota county that includes Minneapolis. During her term, she pursued a tough-on-crime approach, leading to the hyper-policing and over-prosecution of Black people, especially Black youth.

However, since Floyd’s murder, an even more nefarious part of her tenure has revealed itself. As county attorney, Klobuchar consistently declined to bring charges against police officers accused of brutality, including Chauvin. Following public outcry  — including the trending #Klobocop — the office of the county attorney came forward to claim that, at the time that case was brought, Klobuchar had left the position, leaving the decision to her sucesor, who did not present charges. What is clear is that Klobuchar intentionally decided to not prosecute cop abusers. Like her successor, was perfectly willing to turn a blind eye to police misconduct, both in the case of Chauvin and others, having allowed other killer cops off the hook by refusing to prosecute dozens of cases of police violence and misconduct.

This situation also reveals the limits of ‘lesser evilism’ and working with the Democratic party. Minnesota is a Blue state and Minneapolis, a deep blue city, with both a Democratic Governor and Mayor. In addition, the Attorney General of Minneapolis is Keith Ellison, a long-time supporter of Bernie Sanders who ran an insurgent campaign for Chair of the DNC in 2017, promising to reform the party and bolster the progressive wing. However, all three men are in lock-step behind deploying the National Guard to suppress protests. All three men have discussed the need for justice, but none have ordered the arrest of the officers in question. All three men have denounced the ‘system’, but none have reckoned with their own role in it. This raises a vital question: if the Mayor, Attorney General, Governor, and Speaker of the State House are all Democrats, and Democrats are purportedly interested in racial justice, then what exactly is stopping them? What is the system that they are raging against and why is it that, even with every major position of power in the state, not one of the Democrats are able to sufficiently respond?

The answer should be clear: the Democrats, both the progressive and the establishment wings, are not substantially different from the Republicans when the role of the capitalist state is put into question. When the time comes, a Democratic government and a Republican government will have essentially the same response to protests: they will put them down by any means necessary. The protests don’t just reflect th pain and anger over the assassination of George Floyd, but also overthe systematic social, economic and racial inequality that has been exposed during the course of this pandemic. For decades, the Democratic Party has governed with many promises and no substantial changes for Black people’s lives.

Even as this contradiction between rhetoric and action is evident, it is almost laughable that Democratic Party officials are continuing their age-old push to vote away systematic problems. Many are trying to pivot to Trump and his outrageous, dangerous, and racist response. Calls for ‘vote in November’ are put forward as if voting for Joe Biden will resolve a crisis that is currently unfolding. Even if Joe Biden was some magical force that would resolve all of the problems of racism — and he was already Vice President during Ferguson — the idea that the way to solve a crisis in May is to wait five months to cast a vote is preposterous. With a massive crisis unfolding in a Blue state, where they control essentially every level of power, the Democrats have been unmasked, as they utilize the armed wings of state power to repress protests. Meanwhile, the current pandemic will continue to make problems worse for Black people.

The coronavirus crisis has shown that deep inequalities affecting the Black community persist throughout Minneapolis and Minnesota. The problem of housing and unemployment has been exacerbated, and most precarious essential jobs are held by people of color. The use of the police forces to manage social distancing measures through the pandemic has not meant safety, but danger and death for people of color.

Both Frey and other Democratic representatives have called for pacifying the protests, equating the violence of the demonstrations with the racist violence perpetrated by the state, of which they are a part. The political class in Minneapolis, in particular, and Minnesota is trying to prevent an escalation of this crisis in order to, among other reasons, protect capitalist interests. Target, which is owned by the Dayton family, emerged as a site of protest and looting. One of the family, former Minnesota Democratic Governor Mark Dayton, served until 2019 and was later succeeded by Walz. Target has benefited from the pandemic with a 141% increase in its digital purchases, according to Axios. The interests of the capitalist parties are increasingly exposed as the pandemic and the economic and social violence against workers and the oppressed advance. Target workers, by contrast, spoke out in solidarity with the protesters.

President Trump said he contacted Walz to offer more National Guardsmen to quell the protests, tweeting later, saying that “when the looting starts, the shooting starts”. These statements only enable repressive violence and racist attacks against Black people. While publicly condemning Floyd’s death, Republicans and Democrats are responsible for the criminalization and systematic violence against people of color. The protests in Minneapolis show the massive anger that are rooted in the marginalization, abuse and exploitation of the most oppressed in the working class. The capitalist state is responsible for the violence and repression. The case of George Floyd has encouraged thousands of people in Minneapolis and across the country to protest. We are witnessing a rebellion from the most oppressed ranks of the working class. This is a battle where we will need the unity of the working class — like we’re seeing in the numerous examples of solidarity — along with political independence from those who call themselves our friends but are (literally) our butchers.