Police Brutality in Albania: “The Revolt Seems Like Something That Was Waiting to Happen”

Earlier this month, several thousand people, especially the youth, had been mobilizing in Albania. The protests are in reaction to the murder of a young man by Albanian police, but they reveal deeper frustrations. Last week, Philippe Alcoy, editor for Révolution Permanente (Left Voice’s sister site in France) interviewed Redi Muçi, a member of Organizata Politike, a radical left-wing Albanian organization for the publication LeftEast. 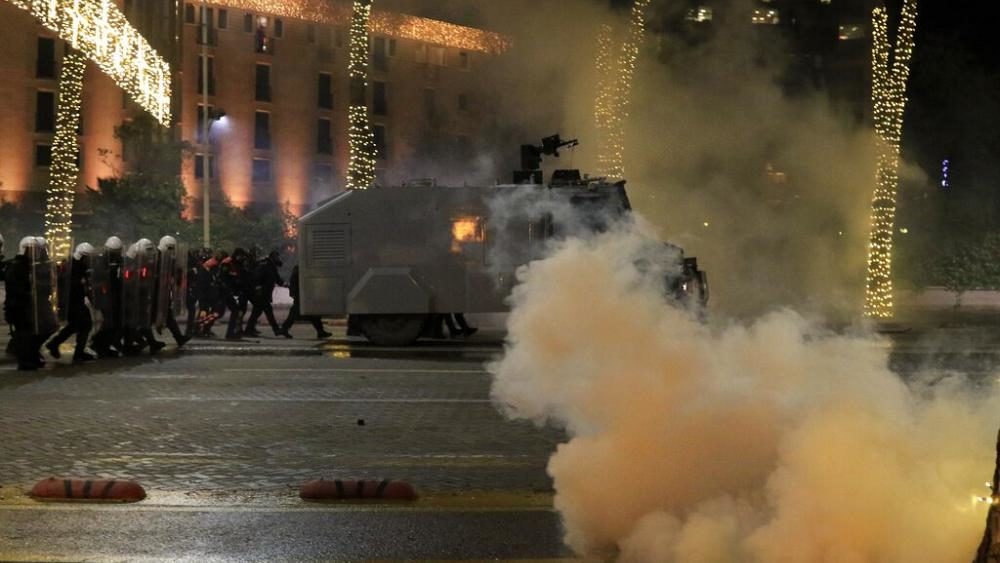 For several days now, young people have been demonstrating in Albania, particularly in Tirana, the capital. They protest police brutality, but their discontent goes far beyond that and expresses deep socioeconomic frustrations. The government’s response has been hypocritical rhetoric on the one hand and brutal repression with hundreds of arrests on the other.

The young people denounce the murder of a 25-year-old man by the police. The government attempted to calm the situation by apologizing; the Interior Minister resigned. However, mobilization continued.

Reporters sans frontières denounced violations of journalists’ rights as dozens of parents are still searching for the whereabouts of their children arrested during the demonstrations. The number of arrests has been so high in Tirana that detainees have been transferred to other cities, like Elbasan or Durres, several kilometers from the Albanian capital.

We interviewed Redi Muçi, a member of Organizata Politike, a radical leftist Albanian formation, about the situation in the country after the mobilization of youth from the suburbs.

LeftEast (LE): Since Thursday many people, especially young people, have been demonstrating against police brutality on the streets of Tirana, defying the anti-Covid measures taken by the government. Protestors denounce the murder of Klodian Rasha, a 25-year-old man, by a policeman. Could you tell us more about what happened?

Redi Muçi (RM): In the early hours of December 8, Klodian Rasha was walking home in his neighborhood. A police patrol asked him to stop because it was past lockdown hours. When he started running away, two bullets were fired at him, killing him instantly. Due to the media reaction, for three days the police did not clarify whether Klodian was in possession of a gun. Finally, they admitted that the policeman had shot him because of a hard object that he mistook for a gun. This prompted waves of young people, especially from the suburbs of Tirana, to take to the streets for four consecutive days. Serious clashes with the police saw more than 300 people arrested, among them 67 minors (according to reports by the People’s Advocate).

LE: The Prime Minister, Edi Rama, apologized for what happened but also said that this “was an isolated event” and not the result of a culture of police violence. Is this really true? What was the response of the authorities to the demonstrations?

RM: Although the shooting of an unarmed citizen can be considered an isolated event, there has been an increasing escalation of violence by the police in recent years. We, as activists of Organizata Politike, have witnessed it while protesting alongside chromium miners, oil refinery workers, and students. A very violent intervention by the police took place last year against the artists who were defending the National Theatre against demolition.

This wave of repression also relates to a decision by the Ministry of Interior to send into early retirement more than 1,000 policemen from the older generation, replacing them over three years with younger newcomers in better physical condition but lacking any experience in handling complex situations. Such was the case of the policeman who killed Klodian; a man in his early twenties who had joined the force only recently, and who had been immediately transferred to one of the most infamous police units: “The Eagles.”

LE: Some reports say that the current mobilizations, especially among the youth, are not only against police brutality, but they reveal a deeper frustration and malaise. What can you say about that? What is the situation of the working class and of the youth in Albania?

RM: I believe that this is the expression of accumulated wrath by the younger generation. They are the children of workers that struggle to make a living and provide a future for them. They are the ones who are excluded from the education system, because the costs of being a student in Tirana today are so high. And generally speaking, all the resources and public services have been privatized, making them literally impossible to access by the lower strata of the population living in the suburbs.

In Albania we have a badly managed pandemic situation, preceded by a badly managed earthquake emergency when 50 people lost their lives and hundreds were left homeless. Meanwhile, there is an oligarchic caste that benefits from all the privatizations and government handouts. Add to this the increased police violence – especially in suburban neighborhoods – and the revolt seems like something that was waiting to happen.

RM: While new cases appear to overwhelm a healthcare system that has been deprived of much needed governmental support for decades, and while the death rate increases, Albania is the country with the lowest number of tests per population ― six times lower than the average in Europe and three times lower than the average in the region. Without widespread testing it is impossible to build a meaningful containment strategy.

Meanwhile, the government imposes absurd measures that make no sense ― on the one hand, partial lockdowns and compulsory wearing of masks outdoors, and on the other workers crammed together in tight mines, factories, and call centrs, turning them into nests of infection.

Those responsible for enforcing these measures through penalties and terrorizing the population are the police. The pandemic has already been used as a justification for repressing protests, such as the oil refinery workers’ protest in Tirana. This might have been another reason for the explosion of the demonstrations.

LE: The Interior minister Sander Lleshaj resigned, but that was not enough for the demonstrators, who are still protesting. Do you think that these mobilizations could open a period of deeper political and social crisis, or is it too soon to say?

RM: I believe that the Albanian society has been going through a social crisis for some time now, referring to the events I mentioned earlier. This, however, has yet to turn into a political crisis proper. The anger is growing towards a government that is heading into its third term in office the coming April, primarily also due to the complete illegitimacy of the opposition parties.

Through our activism, with my comrades from Organizata Politike, we have tried to contribute to the creation of new social movements from below, as the antithesis to the system controlled by the oligarchs, articulating the view that politics is not a monopoly of the bureaucrats sitting in parliament, but the realm of the common people who through organizing are able to take hold of their destinies. New independent trade unions have sprung up in Albania, new organizations against the subjugation of women, a student protest that shook the foundations of the government in 2008; all these are signs that politics is moving away from party headquarters and into the squares, workplaces, universities.

Redi Muçi is a lecturer at the Polytechnic University of Tirana and an activist in the left-wing group Organizata Politike.

Philippe Alcoy researches and writes regularly on news and the history of the Balkans and Eastern Europe. Recently, he published “Hongrie 1956: les jours où les travailleurs ont défié le stalinisme” about the Council Revolution of 1956 in Hungary. He is member of the editorial board of the French website RevolutionPermanente.fr and of the Revolutionary Communist Current of the New Anticapitalist Party.

This article was originally published December 22 on LeftEast.