Police Can’t Stop Gendered Violence — They Cause It

Liberals often argue, in response to calls to defund or abolish the police, that we need more cops to protect women against sexist violence. But police are a source of sexist violence, not a solution. An officer of London’s Metropolitan Police killed Sarah Everard — and others attacked people who gathered to remember her. 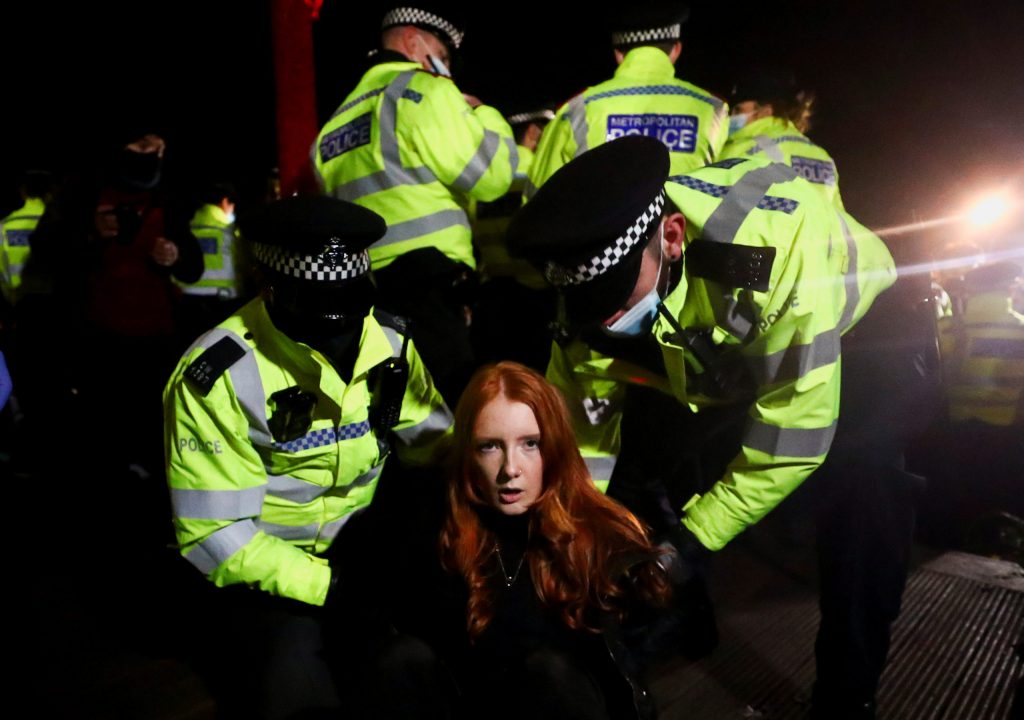 Patsy Stevenson was laying down a candle in memory of Sarah Everard before she was thrown to the ground by the cops. (Hannah McKay / Reuters)

Last Saturday, thousands gathered in South London’s Clapham Common for a vigil to remember Sarah Everard, who disappeared while walking home in Clapham on March 3. Following a days long search, her remains were discovered in woods in Kent, many miles away. Wayne Couzens, an officer from the Metropolitan Police (commonly known as the Met), has since been charged with Everard’s kidnapping and subsequent murder.

While Couzens wasn’t on duty when he allegedly kidnapped Everard — he had finished his shift earlier that morning — the fact that he is a police officer is indicative of the role of police in society. It wasn’t Couzen’s first act of violence. He is also accused of “exposing himself” to a McDonalds employee only three days before. Despite a police report being filled out, Couzens remained on the job.

Police had banned the planned vigil for Everard and threatened the organizers with hefty fines, so the official gathering was canceled. Still, some 5,000 people showed up at Clapham Common. As evening fell, Met officers declared the assembly “unlawful” — citing  the danger of spreading Covid. They threatened more fines, and soon began making arrests. Protesters began to chant “shame on you” and “who do you protect?” As if to prove their point, police pushed and hit those who had gathered peacefully.

Police commissioner Cressida Dick later defended her cops. “I don’t think anybody who was not in the operation can actually pass a detailed comment on the rightness and wrongness [of the cops’ actions]. This is fiendishly difficult policing.”

People across the UK and the world beg to differ: the images of police brutality could not be more clear.

Patsy Stevenson, who was only there to lay down a candle, was thrown to the ground by two cops. That striking image has since been seen around the world. “I’ve never been so scared,” she recalled on Monday on the TV show Good Morning Britain. “I think women have stood by and let things happen for long enough.”

The British political establishment has been tripping over itself to distance itself from the despicable police action. London Mayor Sadiq Khan, of the Labour Party, called it “totally unacceptable.” Yet Keir Starmer, the leader of the Labour Party, stated that the police commissioner shouldn’t resign. Instead, Starmer — who was knighted for his services as a crown prosecutor — is simply calling for more cops and harsher sentences for rapists.

The day after the police attack in Clapham Court, thousands of people marched through London protesting the murder of Everard and the police repression that followed it. They gathered in Parliament Square and at the Met’s headquarters. They were also protesting a new law that the Tory government is attempting to push through parliament that would effectively outlaw protests. The Police, Crime, Sentencing and Courts Bill would give the police the legal right to make their actions in Clapham a regular occurrence.

Do We Need More Police?

There should be no surprise that this entire situation is enraging the British public. It puts the lie to the age-old argument of so many liberals when discussion about defunding or abolishing the police come up: but what about violence against women or hate crimes? They argue that the “solution” to these unspeakable acts of violence is more cops on the streets. In fact, in the UK, the latest government initiative is to put plainclothes, undercover cops in bars with the excuse of “protecting women from violence.” How absurd: Everard’s murderer could have easily been one of those undercover cops.

The “more cops” argument ignores that police frequently perpetrate these violent acts. Cops are often guilty of violence against women, and some estimates state that up to 40 percent of police officers commit violence against their own family members. In addition, the idea that cops stop violence completely ignores the many, many acts of beatings, rapes, and murders they commit both on- and off duty.

Let’s be clear: Wayne Couzens kidnapping and murdering a woman may be shocking, but it is part of a larger trend of unspeakable violence routinely committed against the most oppressed at the hands of cops. It is the cops who beat protesters. It is the cops who blind journalists. It is the cops who rape sex workers. It was cops who choked George Floyd to death on the ground. Cops don’t exist to protect the vulnerable — their role is to make sure they stay in their place.

Cop violence, both state-sanctioned (such as beating and arresting vigil-goers) and “extracurricular” (such as the murder of Everard), results from having a force of people working as armed thugs in defense of a deeply racist, sexist, and exploitative system. Indeed, violence against women is part of a systemically racist and patriarchal society that treats women’s lives as having lesser value and views sex and women’s bodies as existing exclusively for male pleasure. That’s why, when women are assaulted, society and the media always tries to blame the woman — her skirt was too short, she led the man on, she was walking home at night — and does little to hold perpetrators accountable.

Cops face even fewer consequences than the average man. They are trained to use violence to maintain systems of oppression, and they are guaranteed nearly complete immunity when they injure or kill people. It should be little wonder, then, that so many police officers recreate that violence when they’re off duty.

The cops will never be the solution to sexist violence. Protests like the one in Clapham Common, that question the role police play in capitalist society, show the need to build a strong feminist movement, linked to the workers’ movement, that will put an end to patriarchy.