In Indianapolis, two police officers murdered Sean Reed who was broadcasting on Facebook Live. Thousands of viewers listened as Reed was shot 13 times by officers who then said, “I think it’s going to be a closed casket homie.” 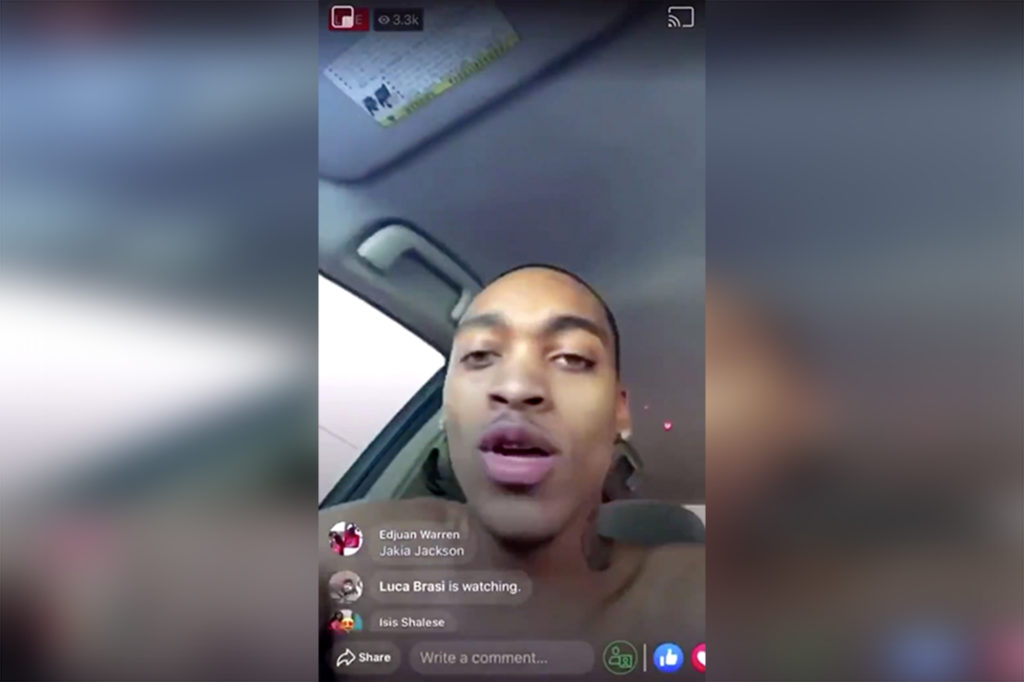 On May 6, Indianapolis Police shot and killed Sean Reed, an army veteran, while thousands watched on his Facebook livestream. The officers on the scene first used a taser and then shot Reed 13 times. Afterwards, the officers can be heard laughing and one officer says, “I think it’s going to be a closed casket homie.”

Earlier in the evening, police say they saw Reed’s car driving erratically down the interstate and began to follow him. While driving, Reed went onto Facebook Live and asked for his viewers to, “Please come get me!”  A high-speed police chase ensued. After stopping his car, Reed ran out and was pursued by the officers on foot. Still streaming, the video became shakier as Reed presumably tucked his phone away while running. As the video went on, viewers heard the sounds of screaming, a taser, and then 13 gunshots.

The Police Department of Indianapolis has since put the officers in question on administrative leave pending investigation. At this time their identities have not been disclosed but the department has claimed they are Black men. The fact that Reed was armed at the time of his murder is being used as justification for the decision to gun him down.

The situation is all too familiar. As the prolonged nationwide quarantines drags on, police brutality and violence against the Black community is increasing. In New York City, NYPD is disproportionately targeting Black neighborhoods to police new social distancing policies. In Georgia, two men shot and killed a Black man, Ahmaud Arbery, while he was jogging in a suburban neighborhood. It took the state two months to charge the men involved, despite video evidence and testimonials from the murderers themselves. Reed’s murder in Indianapolis is just another act of violence carried out by a racist institution.

More and more in the public discourse, these murders are being labeled as “modern lynchings.” Violence against the Black community never ended — it just took on a different shape, under legal frameworks like the Stand Your Ground Laws. During the 100 years following the Civil War, 99% of the perpetrators of mob violence were never held accountable. In 2015, more Black people were killed by the police than by lynch mobs during the heydey of Jim Crow. While all of these state-sanctioned murders occur against predominantly Black men, ask yourself this: How many of these murderers were sent to jail? How many were even fired from the Police Department? An internal investigation looking into a racist institution that is done from within its own ranks will never hold itself or its members accountable.

Many Indianapolis residents have gathered to protest the actions of the police force. The day after Reed’s death, almost 200 people gathered in a prayer vigil to protest. The protestors wore masks and some stayed in their car to practice social distancing, blocking the intersection of West 62nd Street, the site of his death. The victim’s father, Jamie Reed, said, “It just shows me that we’re not really being protected and served. We’re being hunted.”

As the coronavirus continues, more and more state governments are turning to police and military apparatuses to violently discipline their citizens. The victims of this growing state violence are overwhelmingly working-class and Black. We demand that the United States government end its violent assault on these communities. We demand justice for Sean Reed and all victims of state violence.