The cops maced, beat and arrested the people who showed up to protest the white nationalist and hate-filled “straight pride parade” in Boston. 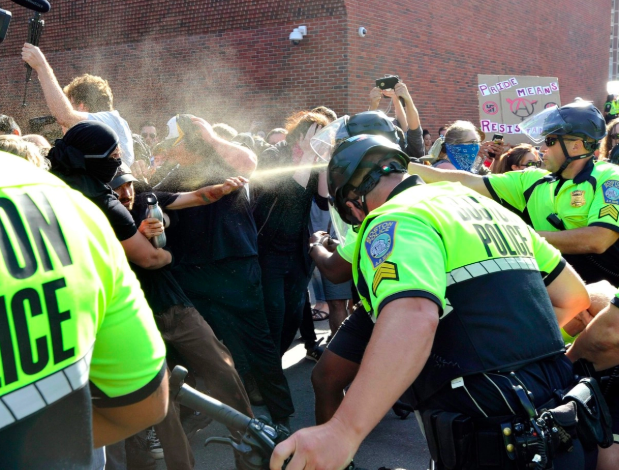 “It’s great to be straight.”

Those were the chants and posters held up at Saturday’s “Straight Pride Parade” in Boston. American and Israeli flags abounded as over 100 people rallied for this hate-filled event. Gay neo-fascist Milo Yiannopoulos led the parade of Trump supporters through the streets with speakers blaring “God Bless America.”

“Whether you are straight and part of the oppressed majority, or here as an ally supporting us, we welcome you to the greatest parade in the history of the world!” said Mark Sahady, who helped put on the parade organized by Super Happy Fun America, a group with ties to white nationalists.

More than a few signs said “Build the wall and crime will fall.” The Trump signs and the anti-immigrant rhetoric show that this was not only a rally about the homophobic and transphobic hate of “straight pride.”  This was a white-supremacist, nationalist hate rally, bringing together the most racist, sexist, homo- and transphobic Trump supporters.

This rally was about an emboldened right wing who feels threatened by the very existence of LGBTQ+ people, immigrants and feminists. The few rights we have won—the right to marry, or to have a parade once a year, or be a token best friend on a TV show or—make these right wing sectors feel that they are an “oppressed majority.” And our erasure is part of a broader political project to “Make America Great Again”: to make it as racist, sexist, homo- and transphobic as possible. This comes on the heels of several neo-fascist mobilizations, most recently in Portland, where the police also defended the neo-fascists and attacked counter-protesters.

The Boston community responded forcefully. Over 1,000 people mobilized against the “Straight Pride Parade.” It was clear that despite tons of press, the “straights” were humiliatingly outnumbered.

It is no surprise that the police were there to protect and defend only one side: the neo-fascists. The sheer number of cops was staggering; Boston brought in cops from other cities to make sure that the homo- and transphobes marched without interruption. The police wore gas masks, military outfits and helmets; they came ready for battle. What was perhaps more surprising was the virulence with which the police attacked counter-protesters, arresting 36 of them and pepper spraying more, including several medics. Not only did the police mace counter-protesters, but some were also punched and hit with batons. The violence by the “Straight Pride” crowd was often unchecked, like when Proud Boy member Kenny Lizardo chased counter-protesters down the street.

While in the past few years, the police have attempted to paint themselves as “queer friendly,” with the police marching in Pride—New York City Police Commissioner James O’Neill even “apologized” for Stonewall—their actions in Boston show the cops’ true colors. They side with the right wing that wants to drive LGBTQ+ people into the closet. Their hatred contributes to suicide rates, hate crimes and the death of over 14 Black trans women just this year.

Celebrating “straight pride” is like celebrating “white pride.” And the cops once again defended hate groups, just as they did in Portland and around the country.

You may be interested in: NYPD, Apology for Stonewall Not Accepted

It’s no surprise: the cops are a right wing force meant to terrorize the working class and oppressed people. As LGBTQ+ people, our movement was born from violent confrontations with the police, and even if the police march in our parades and drape themselves with rainbow flags, we know what they do to Black and Brown people every day. We know what they do to gender non-conforming folks, especially those of color.

And the stronger we—the Left—get, the more the police will be used to terrorize us, like they did in Boston and like they have done throughout history.

Now more than ever, it’s important to make clear: no cops at pride.

No cops (or cop organizers) in our organizations.

The cops defend with brutality and terror a system that we, the Left, want to destroy.