Thousands of women marched in demonstrations across Mexico on September 28 to demand the right to free, legal, and accessible abortion. The protests were harshly repressed by police forces deployed by local governments. In Mexico City, which is under the leadership of a “progressive” Mayor, the police outnumbered protesters 30 to one. 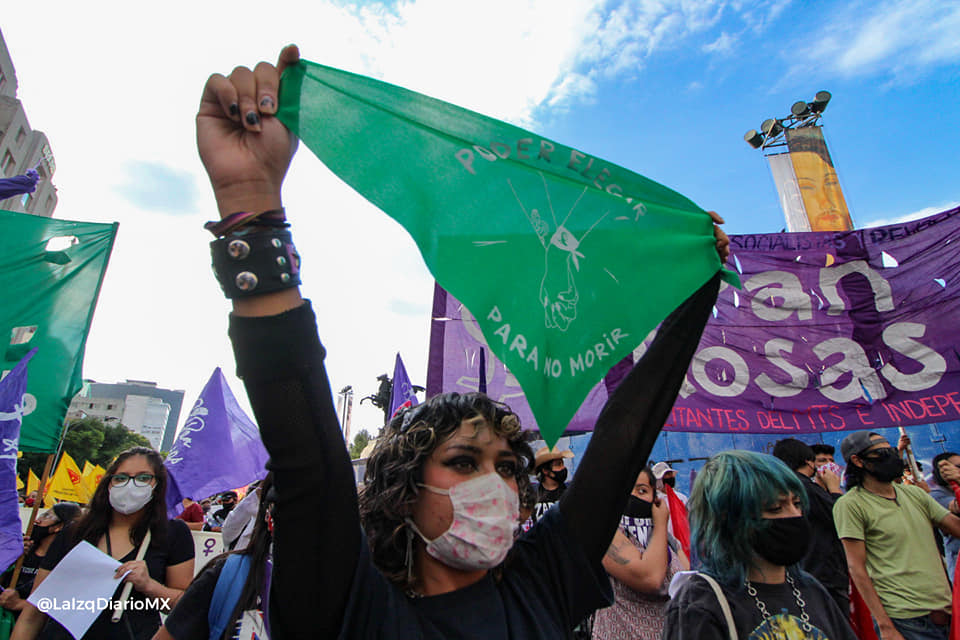 On September 28 every year, feminist organizations in Latin America observe International Safe Abortion Day and mobilize for the legalization of abortion throughout the continent.

This year, in Mexico, feminist organizations marched through the streets demanding legal abortion in all parts of the country. Currently, only Mexico City and the state of Oaxaca have legalized abortion. Though it claims to be “Mexico’s hope,” MORENA, the “center-left” governing party in Mexico headed by Andrés Manuel López Obrador (AMLO), is no friend to women in Mexico. AMLO’s government has led an assault on women’s rights and has appointed several far-right evangelical politicians in local congresses who block the right to safe and legal abortions.

Mexico City is governed by Mayor Claudia Sheinbaum, a “progressive” politician who took power in 2018. Upon taking office, one of the first things she did was “dismantle” Mexico City’s Riot Police, the repressive arm of the state responsible for violently suppressing protests and demonstrations; this was a long-standing demand from many activists that dated back to the 1968 student movement. However, despite her progressive rhetoric, Sheinbaum merely changed the name of this wing of the police and enabled it to continue repressing mobilizations in the city.

It was no surprise then that over a thousand riot cops came to meet the feminist demonstrations on September 28, outnumbering demonstrators 30 to one and preventing the mobilizations from reaching their destination, the Zócalo — Mexico City’s main square. According to the authorities, the police were deployed to “protect” the counter-protesters of the National Anti-AMLO Front (FRENAAA), a right-wing grouping whose members were enlisted in the armies of the Church and are enemies of women’s rights. Sheinbaum may paint herself and her administration as proponents of women’s rights, but this did not stop them from intervening on the side of an openly anti-women, right-wing group like the FRENAAA.

As the protest made its way through the city, the riot police cut a contingent of demonstrators off from the rest of the group, beating protesters and firing tear gas into the crowd. . The police kept the demonstrators trapped for hours before releasing them and allowing them to rejoin the rally taking place in the historic center of Mexico City.

The repression continued throughout the day. An estimated 1750 police officers were deployed to meet the protest at its final destination. The cops then proceeded to surround the demonstration, gas demonstrators, and beat them with riot shields. Some accounts report that the police threw firecrackers and other projectiles into the crowd. Multiple protesters were injured during the protest.

This repressive fury was unleashed against groups and organizations that are demanding a basic right — that of legal, safe, and free abortion. Despite the intense violence, however, the cops were not able to break up the protests or drive back the protesters. The demonstrators denounced the capital city government’s repression and demanded the immediate withdrawal of the police.

In Mexico City, members of the socialist feminist organization Pan y Rosas (Bread and Roses) marched with banners and drums alongside workers to show how working-class women are disproportionately put at risk without access to safe and legal abortions. These contingents were also surrounded and gassed by the police, but managed to break off from the police and march with other contingents through the streets of Mexico City.

In the city of Guadalajara, hundreds of women marched in the afternoon to the state Congress building to demand the legalization of free, safe, and unrestricted abortion. Riot police along with conservative pro-lifers confronted the mobilization in order to prevent it from reaching the government palace, but they were unable to stop the protesters.

As they marched, women from all over the city chanted “Yes or no to abortion — that’s for me to decide!” and “Get your rosaries out of our ovaries!”

In this border city, just south of El Paso (Texas), around 100 women and activists marched from the Juan Gabriel House to the Mother’s Monument, chanting slogans against femicide and in support of the right to decide what to do with their bodies. Several feminist collectives and the group Pan y Rosas participated in the rally. The police were deployed to intimidate the demonstrators, but the protest continued despite the repression.

From north to south, from east to west: the green tide

Protests for abortion rights took place across Mexico, including in other cities like San Luis Potosí in the north, Cancún and Playa del Carmen in the Yucatán penunsila state of Quintana Roo, as well as in the president’s home state of Tabasco.

Flora Aco, a state sector worker and a militant of the Socialist Workers’ Movement and Bread and Roses, declared: “Today showed that AMLO’s government is an enemy of women’s rights, just like the previous [right-wing] governments of the PRI and the PAN. With 10 women murdered per day and health workers at the top of the terrible list of people affected by the pandemic, the head of government, Claudia Sheinbaum, and President López Obrador repressed us to defend the conservatives of the Church. In order to win the right to abortion, to end violence against women, and to end the precariousness of labor, it is urgent to organize a broad movement of women, independent of the government and of all the parties in Congress, that allies itself with the working class and all the oppressed.”

First published in Spanish on September 29 in La Izquierda Diario.