In Sudan this past weekend, the military took power in a coup after months of divisions within the government. It could have major consequences for the region. 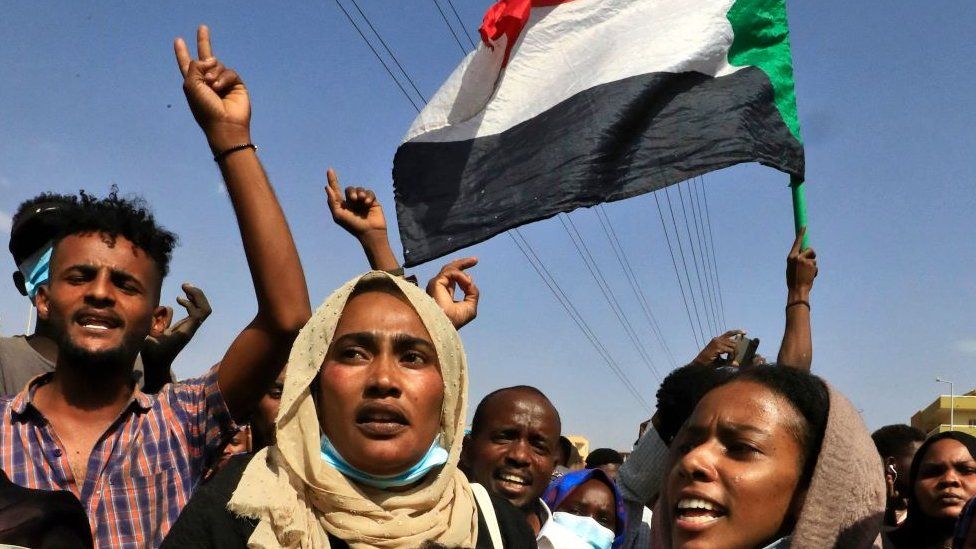 The political, economic, and social situation in Sudan has been deteriorating in recent weeks, a product of the divisions and fractures within the transitional government. In the days preceding a coup on Monday, October 25, supporters of the military wing and those defending the civilians in the government even demonstrated in the streets of the country’s main cities. On top of this, there has been a blockade of the Red Sea ports in the country’s east, resulting in shortages of some basic goods.

This is the context for Monday’s coup. The military, led by General Abdel Fattah al-Burhan, arrested Prime Minister Abdalla Hamdok and several other ministers and dissolved the Sovereignty Council of Sudan and the government. The Sovereignty Council was established following popular mobilizations in 2019 against the dictator Omar al-Bashir, with members from the armed forces and “technocrats” from so-called civil society. While there had been friction between these two groups from the beginning, the situation had become much worse in recent months, with a fraction of the civil-society wing even joining with the military in demanding the dissolution of the government.

It should be noted that despite the fall of al-Bashir, forces of the former regime remained active, particularly within the army. Mobilizations in recent days by the pro-civilian wing may have spurred that particular sector of the local ruling classes to action, fearing they could lose significant pieces of their power. As Middle East Eye reported, “Pro-military protesters in eastern Sudan have shut down ports and blockaded roads … affecting the supply and distribution of food, bread, fuel, and other goods to the rest of the country. In response, tens of thousands of people marched last Thursday to oppose the pro-military demonstrations, accusing the army of staging a large-scale disinformation campaign to undermine the civilian leadership.”

In addition, there have been threats to extradite former president al-Bashir to stand trial at the International Criminal Court, which could also have consequences for other military officials, including those involved in the bloody repression of the 2019 popular mobilizations.

The United States and the main European powers reacted to the coup by demanding the release of the prime Minister and the return of the transitional government. Washington even threatened the country with a suspension of aid.

Some analysts, however, believe the military will not attempt a complete break with the political orientation of the transitional government of which it was a part. Alex de Waal, an expert on Sudan, told Deutsche Welle, “What the military would probably like to do is to move [technocratic prime minister] Hamdok into a position where he stays in office, but where they pull the strings.”

Theodore Murphy, director of the Africa programme at the European Council on Foreign Relations, told Deutsche Welle that “the message that the army wants to convey to the public is that this is not a coup — but rather a correction to Sudan’s transition to democracy … Their focus is on replacing certain civilian politicians who they say were endangering the country and fomenting dissent within the military.”

It is more than likely, however, that the military will have to prove itself before it can count on financial assistance from the United States and international bodies such as the IMF and the World Bank, which had entered into discussions with the transitional government. There is speculation that instead the Sudanese military will turn to the Gulf petro-monarchies. Indeed, some analysts speculate that Egypt and the United Arab Emirates could be behind the coup — something not possible to confirm at the moment. It is certain, however, that these states will try to take advantage of the situation at the regional level.

Indeed, in the conflict that pits Egypt and Sudan against Ethiopia over the construction of the Renaissance Dam on the Nile, the Sudanese military has adopted a more aggressive posture towards its neighbor to the southeast. Sudan has an ongoing border dispute with Ethiopia. More broadly, Ethiopia — which is facing an internal conflict against a number of rebel armies, including in the Tigray region — is moving closer and closer to Turkey, which itself is a competitor of the Egypt–United Arab Emirates–Saudi Arabia alliance that also includes Israel, Greece, and France. In August, Ethiopian prime minister Abiy Ahmed visited Turkey and signed agreements to purchase military equipment and for financial and military cooperation. Turkey is also the second largest-investor in the country after China. Egypt and its allies hope that a tougher stance by the Sudanese military towards Ethiopia will at the same time contribute to blocking the advance of Turkish influence in this part of Africa.

To assert its power, however, the military still has to face the resistance of the popular mobilizations. That is why the junta has been trying to quell resistance with brutal repression that has already left at least seven people dead and 140 injured. This has unfolded despite the fact that the transitional government was already opposed by a portion of the population, notably because of the disastrous economic situation and the austerity measures implemented in an agreement with the IMF:

The sentiment on the ground is divided as some public suffering from increased hardship owing to IMF-backed reforms is now favoring a coup … The reforms also involved austerity measures such as floating the currency and the removal of state subsidies, which led to further hikes in the price of fuel and other basic commodities. People queuing for several hours in front of gas stations have become a common sight, and rising food prices pushed many into poverty … Nearly 10 million people are severely food insecure, according to the UN.

In any case, the protests against the coup are showing that the masses still have the energy to mobilize. It remains to be seen whether this will be enough to push back the military. And even if the military manages to impose its own government, it is not certain that it will be stable and capable of imposing its legitimacy on the entire population.

What is certain is that the only people who can guarantee democratic freedoms are the Sudanese youth, women, and workers. The representatives of “civil society” have been defending pro-imperialist policies, imposing austerity measures on the working masses but also showing openness to “normalizing” Sudan’s relations with Israel. This is why, for many analysts, the street is now the main bulwark against dictatorship.

First published in French on October 26 in Révolution Permanente.