“President Macri is Trump’s bootlicker”: A Revolutionary Socialist on the Presidential Debate Stage

The Argentine Presidential elections are today. Meet Nicolás Del Caño, the revolutionary socialist running for President. In the last Presidential debates, he focused on solidarity with the uprisings in Chile and Ecuador. 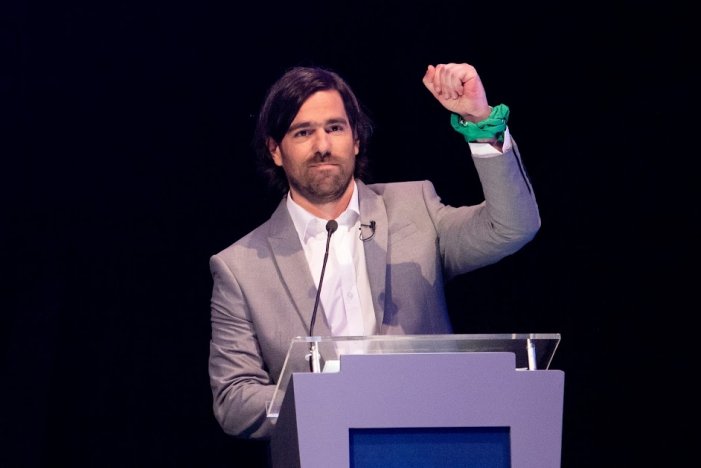 Nicolás Del Caño looked out of place standing on the Argentine presidential debate stage. Donning jeans and a suit jacket, he certainly looked pretty different from millionaire Mauricio Macri, the current president of Argentina.  Del Caño also wore a green bandana on his left wrist, the green bandana that around the world has come to symbolize the right to an abortion—a right denied to so many women everywhere.

But it wasn’t just his clothes that made Nico, as he is popularly referred to, seem a bit out of place on the debate stage.

“I want to use this time, and I want the clock to keep running, to honor the heroic indigenous people and workers in Ecuador who have died at the hands of IMF repression.”

In the next debate he said, “We are socialists; we fight for a government of workers, a democracy a thousand times greater than this one.”

The presidential debates in Argentina took place in two parts, on October 13 and October 20. The Presidential elections are on October 27. Nicolás Del Caño is the presidential candidate for the Left Front, a coalition of socialist parties—mostly Trotskyist. Nico is a member of one of these parties, the Party of Socialist Workers, a revolutionary socialist party best known for helping to lead factory occupations and for their large socialist-feminist organization, Bread and Roses.

Del Caño’s debate performance made a huge splash, particularly because he expressed solidarity with the uprisings in Ecuador and Chile. Later in the week, the Minister of Security spoke against Del Caño—as well as against the possibility of the protests spreading to Argentina. 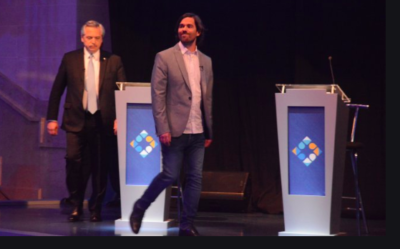 The elections in Argentina will take place on Sunday, in the midst of a deep economic crisis. Since the start of his presidency, Mauricio Macri has attempted to make the working class pay for the crisis, making sure that Argentina is entirely subservient to foreign capital and the IMF.  He imposed a heavy austerity plan on the working and poor majorities, who suffer every day from increasing poverty and unemployment, while the capitalist class continues to make profits in the millions.

As a result, Macri was dealt an emphatic blow in the primary elections held on August 11. In the Argentine primaries, voters vote for the candidate and party of their choice, giving a clear indication of what may happen in the general election. Alberto Fernández, with former President Cristina Kirchner as his VP, crushed Macri, indicating that they will run the country in a few months. The overwhelming triumph of Alberto Fernandez in the primary must be seen as a protest by sectors of the working class and poor against the oppressive austerity under President Macri.

Historically, Peronism has played the role of a “party of order” to administer the crises in Argentina, but this time it will face a tough national and international economic situation. Fernández has been clear: he will pay Argentina’s massive debt to the IMF, and the working class will pay for the crisis.

Managing the economic crisis and implementing the IMF plan while responding to the expectations of the working class and poor people seems practically impossible, especially now that a wave of class struggle is raging in neighboring countries.

The rebellions in Haiti, Puerto Rico, Ecuador, and now Chile point to a different way to address the crisis: to stop the IMF and austerity in the streets. The candidate of the Left Front, Nicolás Del Caño, referred to these rebellions as a path to end the misery that imperialism is imposing on the masses in the region.

Nicolás Del Caño is part of an electoral coalition called the Left and Workers Front, organized by three Trotskyist parties. In these elections, they called for the unity of other sectors of the left in order to face off against Macri and the Kirchnerists together. In this context, other political parties also joined what became known as Left and Workers Front- Unity.

Del Caño is a leader of the Party of Socialist Workers, and his running mate, Romina del Pla, is from the Workers Party. The Left Front has three members in the National Congress and dozens more in state and city councils, including indigenous sanitation worker Alejandro Vilca and human rights lawyer Myriam Bregman. In the midterm elections, the Left Front received over 700,000 votes.

In the first debate, on October 13, Del Caño spoke to the struggle in Ecuador,  saying, “In the first place, I want to greet our brothers and sisters in Ecuador, who at this moment, with their uprising, are a great example of dignity and struggle.”He was the only one to address the events. 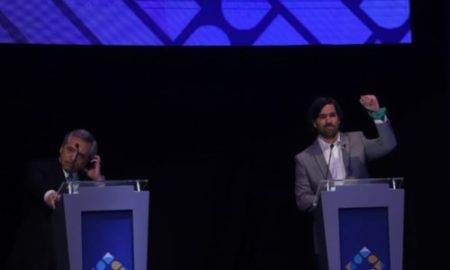 Nico also spoke directly to the right to an abortion and the massive movement that had ignited Argentina earlier in the year. Not one of the other parties is 100% pro-choice, and Del Caño pointed that out:

“They’re not pro-life, they’re anti-rights. They are not pro-life, they are pro clandestine abortion. Only the Left Front has 100% candidates in favor of the right to an abortion. I am convinced that the women will return to the streets, and this time we will win and it will be made legal.”

Social media exploded: Nico, a revolutionary Trotskyist, was the candidate most people spoke about on social media- he reached 14 million individual accounts, more than the president and the rest of the candidates. People were especially talking about the presidential candidate who was supporting the uprising in Ecuador.

Another debate was held a week later. During that week, the Ecuadorian people had forced concessions from the president, and another mass uprising had begun—this time in Chile. In Chile the masses are taking revolutionary action against the neoliberal model of President Piñera, heir to the brutal Pinochet dictatorship. Regarding this historic moment, Del Caño said, “This [economic] crisis is very serious; it is taking place within the framework of a Latin America that is rising up, as we saw in Ecuador, and as we see today in Chile, where our brothers and sisters are carrying out a popular rebellion against the government of Piñera, whose model many here have followed.” This was a reference to Macri and the other right-wing candidates, who have often asserted that the best Latin American model is that of Chile. Unlike Alberto Fernández of the Frente de Todos, who called for “patience” until Macri is defeated at the ballot box, the leader of the Frente de Izquierda held up the youth and workers of Chile as an example: “They are showing us that when governments try to apply these brutal austerity measures, the people will go out into the streets and forcing them to stop,” he said.

Del Caño also spoke about the struggle for trans rights, demanding that each workplace reserve a percentage of jobs for trans people, who suffer the worst unemployment rates in the country. It was the first time this popular demand by trans people was mentioned during a presidential debate.

In both debates, he tackled the issue of the environment, calling for “the youth to rise up and mobilize in defense of the environment” and rejecting the capitalist parties that have “a pact to plunder and pollute our resources and natural assets.” Del Caño was also the only candidate for president to participate in the international climate strike.

The subsequent analysis of the presidential debate in the media brought significant attention to Nico—as well as to Chile. Online searches for information about Chile multiplied during the debate.

What does this mean for Argentina?

On the Monday following the debate, demonstrations were called in several cities in solidarity with the Chilean people and against Piñera’s repression.Macri’s government reacted immediately by repressing these protests, accusing the demonstrators of terrorism and of perpetrating violence. Several demonstrators were arrested. Security Minister Patricia Bullrich said, “In this debate, candidate Del Caño incited people to imitate the Chileans who are setting fire to Chile. They choose violence as a path, and that path is dangerous and uncontrollable. We are determined to continue defending the peace and tranquility of our society, and we will act with the full weight of the law against those who want to generate chaos”—a veiled threat against Del Caño.

It’s not just the protests that are spreading. It’s also the capitalists’ fear of them.

The fact that the popular masses of Argentina are paying attention to Chile’s rebellion makes things complicated for the future government of Alberto Fernández, who ranks as the clear favorite to succeed Macri. With a pro-worker, pro-poor rhetoric but a clear economic plan to continue under the umbrella of the IMF, Fernandez will have the difficult task of managing austerity in Argentina amid a wave of class struggle in the region.

Del Caño concluded his presidential campaign with a rally at the Chilean embassy. He called to confront the crisis through organization and mobilization, and denounced the role of imperialism.

This growing wave of class struggle in Latin America presents the challenge of strengthening the organizations of the socialist left so that there will be fundamental social transformations and not the cosmetic reforms proposed by governments. In these processes of organization and mobilization of the masses, a true political alternative of the workers can emerge.

The goal of Del Caño’s candidacy is to put forward left ideas to the working masses. It is about being on the side of the working class and oppressed every single time and building a revolutionary party that can be a physical force in that struggle—not just on the debate stage but in the workplaces, in the feminist movement, and in the student movement. The goal is to strengthen and radicalize the working class to believe in their own strength. In the end, it is the working class we want to run all of society.

As Isabelle Bartter wrote in response to the presidential debate, “I was watching the debate with Pan y Rosas after a very long march to end the second day of the Encuentro de Mujeres y Disidencias. I will never forget when Nicolás del Caño (a member of their party) raised his fist with that green bandana and said abortion should be legal, safe, and free.

I understand why people love Bernie. He is a refreshing break from the rest of the Democratic Party field for sure. But imagine a party of our own! Imagine our candidate! Imagine what that would do for people’s consciousness in the U.S.!

I wish everyone who has ever told me to shut up and vote for a Democrat could have been there, surrounded by a thousand cheering women and queer people, some of them with tears in their eyes, as their candidate spoke truth to power in front of their whole country, continent, and world. What a difference that could make.”