The primary elections in Argentina on Sunday were a stunning defeat for right-wing president Mauricio Macri. The center-left opposition under Cristina Kirchner won almost 50% of the votes. Despite strong polarization, the Workers’ Left Front, a coalition of revolutionary socialist groups, won almost 700,000 votes. 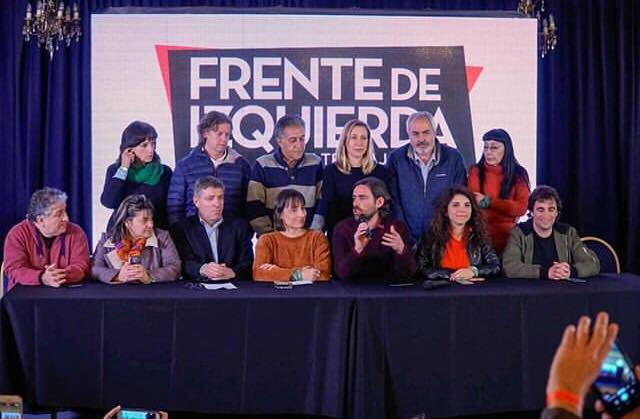 The primary elections on Sunday were a shock for Argentina’s right-wing government. At 10pm, the right-wing president Mauricio Macri conceded that his front “had a bad election”—an understatement if there ever was one. Macri’s coalition, Together for Change (Juntos por el Cambio) won just 32.08% of the vote, 15 points behind the center-left coalition of former president Cristina Kirchner, the Front of All (Frente de Todos) which received 47.65%.

The polls had predicted a neck-and-neck race, but now Kirchner and her presidential candidate Alberto Fernández are almost certain to win the elections on October 27. Macri’s defeat was even more devastating in the strategically important province of Buenos Aires, where he was 20 points behind the Fernándenz-Kirchner ticket.

The Workers Left Front—Unity (Frente de Izquierda y de los Trabajadores—Unidad, FIT-U) presented a ticket with Nicolás del Caño for president and Romina del Plá for vice president, and won 700,000 votes (2.86% of the total). This represents a slight decline compared to the last presidential elections in 2015, when the FIT won 3.3%. However, despite the extreme polarization between the government and the opposition, the FIT-U remained the fourth biggest electoral force in the country. Almost the entire revolutionary socialist left had joined the coalition, including the original three groups of the FIT—the PTS, the PO and IS—and now including the MST.

These election results will lead to a crisis. Macri is a lame duck, but is set to remain in office for four months, with the elections in October until the inauguration in December. Just hours after the election results were announced, “the markets voted,” and the value of the Argentine peso collapsed even further in comparison to the U.S. dollar.

These results are a defeat for Donald Trump and the International Monetary Fund (IMF), who have been the main pillars of Macri’s administration. It is also a blow for Brazil’s extreme right president Jair Bolsonaro and shows that the rightward shift in South America is perhaps not as consolidated as it appears to be.

For the working class of Argentina, Macri’s presidency has meant currency devaluation, mass layoffs, rate hikes for electricity, water and natural gas, and economic crisis. The massive vote for Kirchner is a repudiation of this “government of CEOs” doing the IMF’s bidding.

But Fernández and Kirchner have made it clear that they have no plans to stop paying the country’s foreign debt. The experience of the “anti-neoliberal” or “pink tide” governments of a decade ago in Latin America (including Kirchner, Chávez in Venezuela, Lula in Brazil, Evo in Bolivia etc.) have shown that these reformist governments cannot offer substantial or lasting improvements for the working masses.

Despite  this situation of extreme polarization and strong illusions in an “anti-Macri Front,” the FIT-Unidad was nonetheless able to defend its spot as the fourth biggest electoral force in the country. The FIT-Unidad received no donations from capitalists and instead relied on a massive election campaign run by activists and sympathizers. The results—700,000 votes or 2.86% of the total—represent a slight decline compared to the last presidential elections in 2015, when the FIT won 3.3%.

Many workers were tempted to vote for Fernández and Kirchner as a “lesser evil.” In light of this, the relative success of the front means that it is well positioned to win seats in the national congress and in the provincial legislatures in October. More importantly, as the crisis deepens, the revolutionary socialist left is becoming a political force that is visible at a national level. The seats in congress will be one position from which to coordinate and advance workers’ struggles against future attacks.

In addition the left is now poised to win congressional seats in the City of Buenos Aires, with leading candidate Myriam Bregman, and in the Province of Buenos Aires, with Néstor Pitrola. The FIT-Unidad got strong results with workers’ candidates in other provinces, though it will be difficult to win seats there. In Neuquén province, Raúl Godoy, a leader of the occupied ceramics factory, Zanon, won 5.25% of the votes. In Jujuy in the far north, the trash worker Alejandro Vilca got 4.82%.

The elections on Sunday are known as PASO, which stands for Simultaneous and Obligatory Open Primaries. These primaries, introduced in 2011, allow for different candidates to run for the nomination of a political front. However, this kind of U.S-style primary is seldom used—of the eight political forces participating in the national primaries this year only one had a list of different candidates to vote for.

Because of this the primaries serve predominantly as a kind of qualifying round, with any force that receives less than 1.5% unable to run in  the general elections. The elections in October are for the presidency, half of the Chamber of Deputies, and a third of the Senate. There are also elections for the governors and the legislatures of the provinces, as well as the municipalities.

In recent years, Argentina has been shaken by massive women’s mobilizations. The Green Tide (marea verde) fought for the right to free, legal, and safe abortion. A number of leaders of the movement for abortion rights joined the Front for All in order to get rid of Macri. But Kirchner has never promised to legalize abortion—she was in power for twelve years and consistently blocked any attempt to end the ban.

The candidates of the FIT-Unidad often appeared in green bandanas because they were the only political force that consistently defended the right to choose. Kirchner, in contrast, put lots of vehement opponents of abortion on her slate.

Many are hoping that Fernández and Kirchner will end Macri’s neoliberal austerity policies. But their coalition includes countless legislators and governors who have helped Macri’s government, which lacks its own majority in congress, pass and implement its laws.The FIT-Unidad, in contrast, represents an independent political force for workers, young people, women, and LGBTQ+ people. They are fighting for seats in congress in order to “strengthen every single struggle of the working class that is coming,” as Nicolás del Caño said in the press conference on election night, “so that the capitalists and bankers pay for the crisis that they caused themselves.”