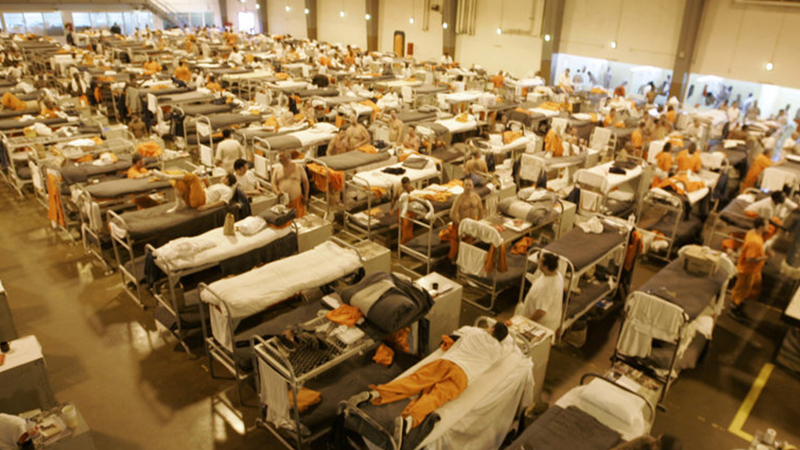 At the end of 2019, New York City had a prison population of over 50,000 people detained across all five boroughs. Incarcerated people – who are disproportionately Black, Brown, and poor – experience abuses and violations of their rights like solitary confinement, being denied medical care, and being forced to work for wages as low as 16 cents an hour, to name just a few.

Incarcerated workers represent one of the most subjugated working class populations in the United States. They experience capitalist exploitation that is slavery in all but name. Chattel slavery ended more than a century ago, but the terms of racialized and hyper-exploited labor were quickly renegotiated through a constitutional carveout: the same 13th Amendment that “abolishes” slavery includes an exception that can force incarcerated people to perform labor under threat of punishment.

In the aftermath of the Civil War, “Black Codes” — racially restrictive laws targeting newly freed formerly enslaved people — were passed and contributed to the growing number of incarcerated Black people. The Convict Leasing system developed in tandem, and incarcerated people were “leased” out to companies for hard labor and minimal wages. Like “slaves,” “convicts” faced corporal punishment, such as whipping, for work violations. Although the Convict Leasing System was officially abolished in 1941, prison labor continues to be used. Enslaved people picked cotton and were branded; convicted people worked the railroads and were whipped; incarcerated people dig graves and endure the torture of solitary confinement. The system of slavery evolves to fit the shape of capitalism..

It is no exaggeration to call prison labor slavery, or to call the 62-cents average that people are paid slave wages. In New York, prison slavery has become a thriving industry, with the Department of Corrections brand Corcroft netting an average profit of $48 million a year. This slave labor produces everything from furniture to cleaning supplies. And many incarcerated people are compelled to work in order to afford basic necessities from the commissary, or as part of their release programs.

Prison labor is so normalized that New York politicians even tout their use of this slave labor as proof of their responsiveness to the coronavirus pandemic. Governor Cuomo bragged about hand sanitizer being made in New York – by prison labor. Ironically, the people producing the sanitizer (or, as was later revealed, rebottling it from an unnamed distributor and slapping on a New York label) are not even allowed to use it. They are prevented or severely restricted from using many hygiene products to protect themselves from illness, despite the fact that the rate of infection at Rikers is exponentially higher than in the rest of the U.S.

Prisons magnify violence, a dynamic which a pandemic intensifies. There have been over 50 confirmed cases of COVID-19 on Rikers, at the time of this writing. Despite this, those with the power to release the incarcerated – like the NY Department of Corrections, Commissioner Cynthia Brann, Mayor De Blasio, and Chief Judge of NY State Courts Judge Janet DiFiore – continue to endanger people through insufficient action.

On March 25th, there were plans for the immediate release of some 300 people, followed by another 800. But with a prison population in the tens of thousands, with around 5,000 at Rikers, this is not even close to enough. Conditions are already dire: people at the Manhattan Detention Center, known as “The Tombs,” say that even though there are multiple cases of COVID-19, they still don’t have access to sanitizer, soap, or regular showers. People have warned for weeks that those in prison are particularly vulnerable to infection, especially those who are elderly and immunocompromised.

The Prison is a tool for racist, classist social control. Founded on the principles of slavery, the prison is not only anti-Black, it is anti-worker. Many languish behind bars because they have been marginalized by systemic poverty. It is the duty of those working to dismantle capitalism to fight for the abolition of prisons, and simultaneously conceive of alternative systems of accountability and justice. In the meantime, socialists need to categorically reject liberal and reformist approaches to the prison industrial complex, like creating hierarchies of more or less deserving incarcerated people.

Calls to release only those who fall into state defined categories, like “nonviolent prisoners,” uphold racist carceral logics that are used to justify leaving other incarcerated people behind. Socialists should not pick and choose which lives matter more during a pandemic; rather, we should organize from the baseline belief that all incarcerated people have a right to freedom, safety, and health, and push to free them all.

Those socialists who are able should coordinate with grassroots movements in New York, like Free Them All, that are pressuring politicians to release everyone and save lives. On March 22nd, 45 people on Rikers announced a strike to protest the lack of protective supplies, the crowded living conditions, and the arbitrary cutoff of their phones for hours on March 22nd. They did this in solidarity with strikers in Hudson County. When workers in prison strike, as in 2018, people on the outside need to do everything we can to push their demands. Newly freed people will also need community support for necessities, like housing and food. People inside do not need those of us outside taking half-assed measures when their lives hang in the balance.