“Pro Life” for Who? Trump is First President to Speak at March for Life

In an attempt to activate his Christian base, Trump speaks at the March for Life. But he isn’t pro life when it comes to oppressed people, immigrants and people living in the Middle East. 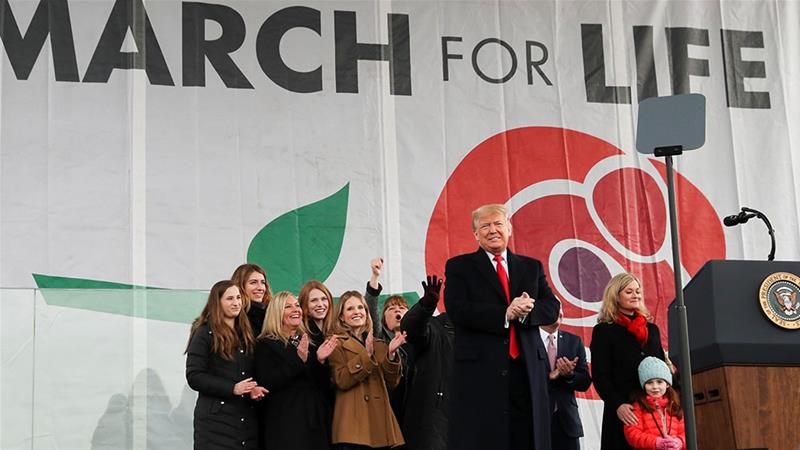 As Senators sat listening to hours upon hours of impeachment proceedings, considering the possibility of removing the President from office, Donald Trump began campaigning for a second term. Yesterday, that meant being the first sitting president ever to attend and speak at the March for Life.  Trump said it was a “profound honor” to be the first president to attend, and assured that “unborn children have never had a stronger defender in the White House.”  Similar to his campaign rallies, at the end of Trump’s speech, the crowd erupted into a chant of “ four more years.”

The March for Life is a large annual march against the right to an abortion, which began in 1974 after the passing of Roe v Wade.  Every year, thousands of people walk to the Supreme Court to demand the overturn of Roe v Wade. The Catholic Church and Evangelical churches mobilize thousands of people to the march. For instance, in Catholic schools throughout Maryland, Northern Virginia and DC, students are transported to the marches by the bus-load. This year nearly 100,000 people attended the march, and for the rest of the weekend, there will be various anti-abortion activities and workshops.

Trump explicitly connected his appearance to the impeachment inquiry, saying, “They are coming after me because I am fighting for you.” Yesterday, his re-election campaign announced the creation of a “Pro-Life Voices for Trump” coalition that will take up “recruiting and activating Americans with pro-life values in support of President Trump’s re-election.”

Evangelicals and Catholics were initially skeptical of Trump. After all, it’s hard to find another President whose personal life so clearly flies in the face of “family values” which was clearly indicated by the now infamous video that circulated before Trump’s election wherein he not only brags about touching women he isn’t married to, but also claims to have sexually assaulted women.  In fact, he called himself “very pro-choice” on NBC’s “Meet the Press” in 1999. But, Trump’s Presidency has done a great deal to advance the pro-life cause, perhaps most clearly by putting two pro-life justices on the Supreme Court, including Brett Kavanaugh, who is also known for his history of sexual assault.

There have also been a slew of attacks on the right to choose. According to the Guttmacher Institute, last year, 58 anti-abortion laws were passed, including 25 that banned abortions to some degree. It is likely that these cases will go to the Supreme Court in the near future.

A cynical “feminism” is also employed at March for Life and among pro-lifers, claiming that they are the ones really on the side of women. The theme for this year’s march was “Life Empower: Pro-life is Pro-Woman.” Frances Floresca, 23, a recent graduate of the University of Utah, called the March for Life “the real Women’s March.” With the popularization of liberal feminism, which argues that you just need to be a woman in order to be pro-woman, it opened the door to the absurd claim that being anti-abortion means being pro-woman. According to the World Health Organization, each year between 4.7% – 13.2% of maternal deaths are a result of an unsafe abortion. In first world countries, it is estimated that 30 women die for every 100,000 unsafe abortions. Being anti-choice does not stop abortion. Instead, it means that mostly working class women die in unsafe procedures. There is nothing pro-life about it.

Likewise, Trump is not pro-life, and certainly not for the lives of children, having put forward the policy of family separations at the border. Seven children have died in US detention centers in the past year. Over 5,400 children were separated from their families and many have not yet been reunited. Further, there are the family separations caused by the prison industrial complex, of which Donald Trump stands at the head. And there are the many deaths of children as a result of US drones and missiles: Trump dropped over 6,300 in Afghanistan last year — a record pace of bombs for the country ravaged by US imperialist forces.

The “March for Life, with Trump as the keynote speaker, is really a march for death of working class women who will die as a result of illegal and unsafe abortions and at the hands of Trump’s policies and the US empire.

But people are starting to fight back. The DSA and other groups are organizing with the campaign slogan “Mass Strike for Reproductive Rights”and are organizing teach-ins and connecting activists around the country. To beat back the attacks on reproductive rights, we will need a mass movement, like the women’s movement in Argentina, where hundreds of thousands of people demanded the right to choose. We will also need to mobilize the labor movement, using workers’ strength to stop the flow of capital at the service of defending the right to an abortion.