Representatives Rashida Tlaib and Debbie Dingell participated in a virtual recruitment drive with U.S. military academies despite Tlaib being a vocal critic of Israel and U.S. military actions in the Middle East. It’s another example of the limits of being a “progressive” in the Democratic Party and the capitalist state. 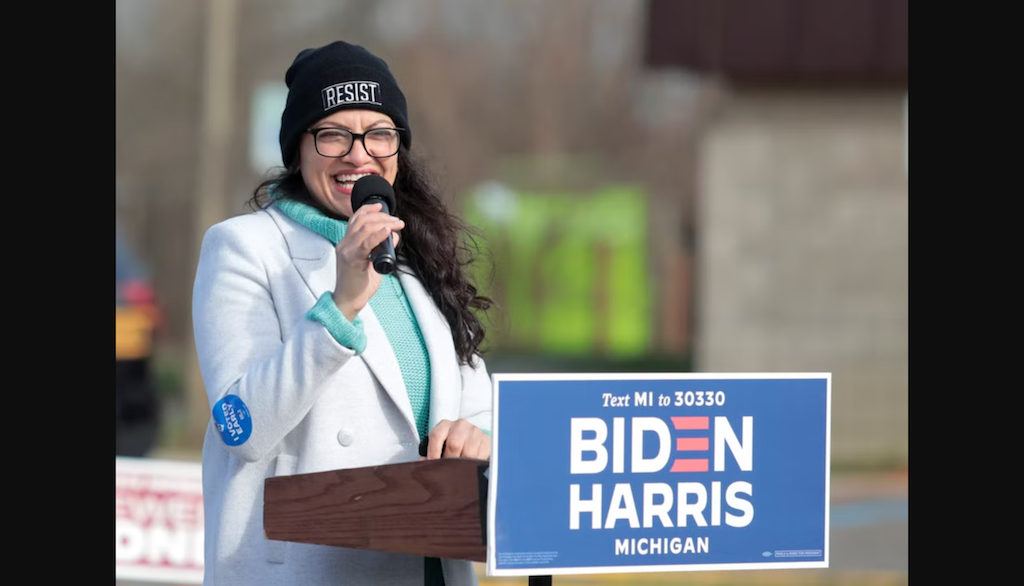 A strange thing occurred on October 11, one that will likely have Michigan U.S. representative Rashida Tlaib’s supporters scratching their heads. Tlaib, who is one of the most progressive lawmakers in the Democratic Party and a member of the Democratic Socialists of America (DSA), hosted a town hall session alongside Debbie Dingell for people interested in joining the military.

Despite ever increasing military budgets and using popular media as propaganda., the military is facing a recruitment crisis; only 9 percent of military-age people are interested in joining the service, the lowest number in over a decade. Moreover, many military-age people grew up during the invasion of Iraq and Afghanistan and saw the destruction caused to those nations, the trillions spent on the wars with no material gain of the working class, and an increasingly unstable economic situation for millennials and Gen Z. Many recognize the role that the military plays, having seen it deployed to suppress the 2020 Floyd protests, and many know that it was used historically to crush militant labor strikes. They see the writing on the wall, and the old tactic of calling on youth to do their patriotic duty doesn’t cut it anymore.

We know that Tlaib is the left wing of the Squad, and she has taken some quite combative stances. This included a public confrontation with President Biden on Palestine, vocally criticizing U.S. backing of the genocide in Yemen undertaken by Saudi Arabia and the United Arab Emirates, and supporting anti-police-brutality protesters in Detroit. She has been a vocal critic of racist surveillance programs in Detroit, and she often speaks about the power and importance of movements in the streets. So why would she help legitimize an institution under public scrutiny?

Because she is still a committed member of the Democratic Party and a supporter of the regime. Members of the regime are obligated to do political favors for those they may disagree with in order to maintain the regime’s stability and quiet down the more centrist members of her own party who deem her “too radical.”

This isn’t the first time Tlaib has done “favors” or made concessions to the institutions of U.S. capitalism, especially the Democrats. For example, Tlaib voted “present” and was unable to voice dissent on the increase of funding for the Capitol Police — the same police who on camera took selfies with those trying to break into the Capitol and treated the insurrectionists with a lax attitude even though they wanted to kill multiple members of Congress. The police are also a fundamental part of the state violence and are needed to protect capitalism and suppress unrest.

Tlaib has also continued to support arms sales to Ukraine, perpetuating an increasingly bloody war and continuing to relegitimize NATO. These concessions to the military and police apparatus harm any sort of solidarity with the Global South and oppressed, as continued support for these institutions allows them to operate as they see fit and to crush any future dissent home and abroad. She thus abandoned internationalism and any solidarity toward those harmed by imperialism, which is hypocritical given that has repeatedly called out U.S. military actions.

Despite being one of the most progressive members in Congress and having pointed out the flaws in the Democratic Party and the institutions of the state, she believes that the only avenue for change is through the Democratic Party and the capitalist state, which have failed to act on the rollback of abortion rights across the country and instead rely on the gerrymandered conservative states to decide.

The Democratic Party has also provided no real solution to climate change, has increased policing funding even after the biggest anti-police uprising in U.S. history, and it has moved to the right by downplaying or abandoning “controversial” issues such as trans rights in order to capture “Trumpist” workers.

Tlaib herself has voiced all these criticisms. Yet she is still a member of the Democratic Party, campaigning on its behalf. She must, then, believe in our current undemocratic system and the Democratic Party as the only avenue for change. Both are declining before the eyes of the working class.

These criticisms extend to the DSA. Contrary to its name, it has no vested interest in building a party with a socialist program. Instead, it works to build social democracy inside the Democratic Party, by electing more Democrats to a system that has shown again and again that it will bend “progressive” elements of the party into supporting the U.S. state. By being a part of the political duopoly, it turns a blind eye to those in Congress who have done additional harm to the global working class, such as Alexandria Ocasio-Cortez, who tacitly supported Trump’s coup in Venezuela and Representative Bowman, who voted for more funding for Israel’s Iron Dome. Both of these actions have done tremendous harm to the working class of those countries, which are already suffering from U.S. imperialism.

The DSA has an interest in maintaining those in power because it believes it is better to reform these institutions then abolish them. But a key limit of this reformism is the singular focus on fighting for concessions at the national level, thus improving conditions at home at the expense of the working class abroad.

But even the goal of improving life for workers — let alone of achieving social democracy — is hampered by the DSA’s ties to the Democratic Party, which is not a neutral player with no agenda. It has a vested interest in maintaining current class relations, because it is a part of the capitalist ruling class and it will legislate and fight on its behalf and will only reform to suppress and co-opt unrest, to maintain its political power. This makes it impossible to build socialism within the Democratic Party.

In addition, strengthening the regime makes it harder for Black struggle, LBGTQ struggles, and militant union activism to operate, because of the increase in state repression and legitimacy. Thus any compromise will come at the expense of the oppressed and members of the working class, an outcome opposed to the ideals of a supposed socialist party.

The strategy of being a progressive in Congress or even being a “democratic socialist” in the regime will always be hamstrung by the Democratic Party and the state. Both are committed to maintaining capitalism. Any goodwill or fights on behalf of the working class, Tlaib, and others will be fought against or deemed too radical in the eyes of the bourgeoisie.

Support for the military, police, and other institutions of oppression divides the working class into imperialist and subjugated countries, instead of uniting the working class against oppressions on an international scale, making it easier for the state to oppress and co-opt movements. This hampers any sort of radical change needed for the working class to survive the oncoming climate catastrophes, economic crisis, and the chipping away of any gains for oppressed people over the decades.

Socialism cannot be brought about by just having more space in Congress for socialist ideals or building a socialist majority in capitalist democracy or just in the Democratic Party. This is because these are not only dead ends for any sort of radical change — the needs of the working class are fundamentally opposed to the rule of the capitalist class.

We need our own institutions in order to represent our interests. That can be built by a working-class party committed to class independence in order to fight for better working conditions, and dedicated to dismantling the institutions of capitalism in favor of revolutionary socialism.