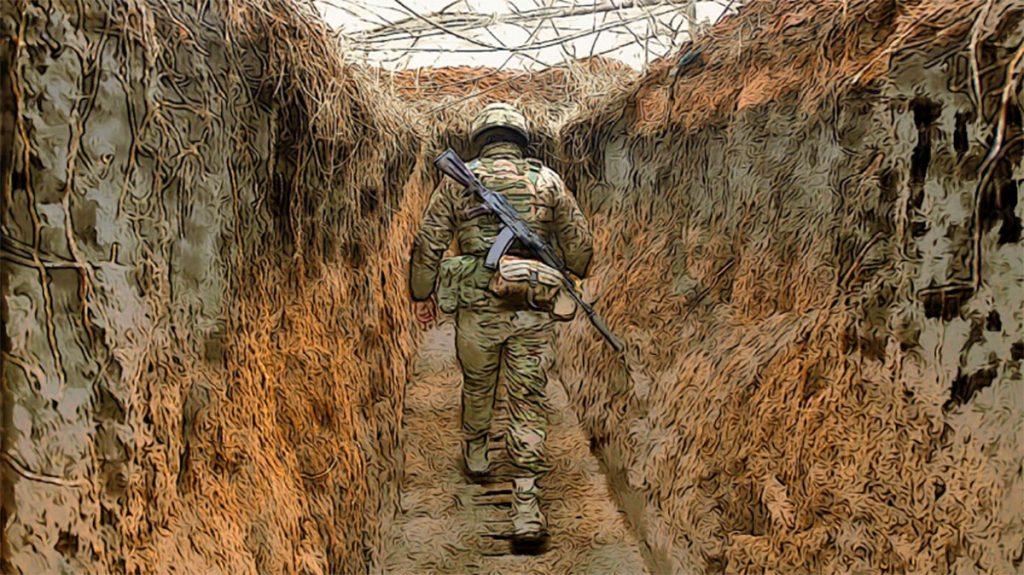 The war in Ukraine has opened a panorama of crisis unprecedented in recent decades. It is necessary to confront this reactionary war by opposing both the Russian invasion of Ukraine and the warlike policy of NATO, from an anti-imperialist and internationalist perspective.

A month has passed since the beginning of the war between Russia and Ukraine, a war in which the NATO powers (the United States and the European Union) are actively involved, even if indirectly for the time being. Strictly speaking, the theater of military operations is limited to Russia, Ukraine, and (secondarily) Belarus. But because nuclear powers are involved, and because of the war’s economic impact and its future consequences, it has global effects. As the conflict continues, not only does the suffering and destruction increase, but there is a threat of further escalation and that nonconventional weapons (chemical and even nuclear) could be employed. While opinions are divided, most political and military analysts predict that there will be no short-term outcome that categorically favors one of the warring parties, which leads some to predict that we are heading for a long war or some type of negotiation from which no clear winner emerges.

As in any conflict, information is a formidable propaganda weapon, essential for achieving legitimacy for acts of war and ultimately translating battlefield results into policy. Russia’s war in Ukraine does not escape this general rule, making the assessment of the concrete situation practically an impossible mission.

There is no objective measure of the military balance and casualties on both sides. Komsomolskaya Pravda, a Kremlin-friendly media outlet, reported that some 9,861 Russian soldiers had died in Ukraine as of March 20, quoting the Defense Ministry as its source. Minutes after publishing this figure, it denied the information (claiming its website had been hacked). The Pentagon estimated Russian fatalities at around 7,000 soldiers in the first month of the war. Meanwhile, Ukraine admits to only about 1,200 dead soldiers, a figure unbelievable even to the Western media who are on the side of Ukrainian president Volodymyr Zelenskyy. Almost in anticipation, the Russian government has censored all opposition media, banned the use of the word “war,” and imprisoned Russians who have participated in anti-war demonstrations or spoken out publicly against the reactionary invasion of Ukraine.

Western imperialist media and intelligence operations, along with the Kremlin, all make the “fog of war” thicker and thicker. Nevertheless, unfolding events allow for drawing some inferences regarding where things stand.

The initial thinking of most analysts was that Putin’s objective was a blitzkrieg (what he called a “special operation”) aimed at achieving a quick capitulation by the Ukrainian government. This result, based on Russia’s tremendous military superiority, has not materialized, and for weeks now the war has been on different terrain.

The explanations for Russia’s failure militarily and politically are a matter of debate and speculation. Putting aside psychological explanations — Putin’s narcissistic, authoritarian, and psychopathic traits — the consensus among leading analysts and advisers in the imperialist states is that Putin made a strategic miscalculation: underestimating Ukraine’s resilience; overestimating the U.S. (and “Western”) crisis flowing from the chaotic withdrawal from Afghanistan, domestic political polarization, and the weakness of the Biden administration; and overestimating his own strengths, in particular with respect to Europe’s (Germany’s) military superiority and dependence on Russian energy.

Based on this perception of the relationship of forces, the neoconservative hawks of the U.S. establishment are pushing to take the war to extremes in order to impose “regime change” in Russia. This excited state of mind seems to have reached even President Biden, who in his speech in Warsaw on March 26 stated that Putin “cannot remain in power,” to the surprise of everyone. At the other ideological-strategic extreme, the “realist” sector of the establishment is pushing for negotiations because it perceives that a prolonged conflict increases the risk of “accidents” that could divide the Western allies.

What has taken hold in recent days is the idea that we are reaching a dangerous stalemate, a situation without winners or losers, which offers no incentive to accept a negotiated settlement and only invites more decisive offensive military actions that could break the impasse. If we abandon the hypothesis of a quick war that would achieve full goals, the two alternative scenarios are schematically a “war of attrition” or a “war of limited objectives.” There is also a combination of both — as seems to be the case.

Let’s look at the facts. In one month, Russia has managed to take control only of the city of Kherson. Its ongoing assault on Kharkiv and Kyiv has not led to significant progress, although it has qualitatively increased the horrors of war — the destruction of infrastructure, civilian casualties, and refugees and internally displaced persons (3.6 and 10 million, respectively). Putin has concentrated on mercilessly shelling the city of Mariupol, which has a double strategic value: it is on the road between the Donbas region and Crimea, and it is the main port on the Sea of Azov through which Ukrainian exports of grain, minerals, and other goods leave. Taking Mariupol means strangling Ukraine’s economy.

The prospect of stalemate is ominous, because it poses a prolonged war of attrition that is very difficult to win, but which at the same time significantly raises the cost of defeat. Perhaps this ruinous scenario explains why Russia is rethinking its objectives and why the war is entering a new phase focused on the Donbas.

The likelihood of this scenario increased after Sergei Rudskoy, one of the main Russian commanders in charge of the operation, insisted that Moscow’s strategy was never to take control of the major Ukrainian cities. The attacks on Kyiv and other urban areas were only diversionary maneuvers to “liberate” the Donetsk and Lugansk “people’s republics.”

If this were the case, the conflict’s center of gravity would again be, as it was eight years ago, in eastern and southeastern Ukraine. That means that a crude Russian offensive could be expected to inflict a strategic defeat in a region where, according to Western intelligence reports, about a quarter of the Ukrainian ground troops are concentrated — including their best-trained detachments. In other words, it would not be in Kyiv but in the Donbas where what Putin can claim inside Russia as the “equivalent” of a triumph would be defined — and, therefore, what Russia would seek to obtain in an eventual negotiation.

Russia seems to be under the double pressure of the war effort and the harsh economic sanctions imposed on it by the United States and European powers. Meanwhile, Zelenskyy remains in power. The Ukrainian army, modest but trained and equipped by NATO with state-of-the-art weaponry, has made the Russian advance more difficult than expected. And although the United States and the EU have not brought everyone to heel — China is trying with difficulty to maintain its ambiguous position; India refrained from condemning Russia at the United Nations; and the Gulf petro-monarchies have ignored calls from the White House to increase oil quotas as a way to lower prices — NATO has for now achieved a unity of purpose in its crusade against Russia. On the basis of the Ukrainian people’s suffering under the Russian invasion, the Western powers are winning the battle of public opinion in favor of economic sanctions (which, as Nicholas Mulder argues in his recent book The Economic Weapon: The Rise of Sanctions as a Tool of Modern War,1Nicholas Mulder, The Economic Weapon: The Rise of Sanctions as a Tool of Modern War (New Haven, CT: Yale University Press, 2022). are an act of war) and justify militarism and imperialist rearmament.

At the last emergency summit, NATO reaffirmed its policy of expansion into Eastern Europe and announced that it will reinforce its military presence on its eastern flank — the Baltic countries, Romania, Poland, and Bulgaria — with an increase from four to eight multinational battle groups from the Baltic to the Black Sea.

At this juncture, it is the United States that is capitalizing the most on this situation by assuming leadership of the imperialist “anti-Putin” united front. Biden was a central actor in the three summits held in Europe during the week of March 20: NATO, the G-7, and the European Union. This is an important turnaround after the significant deterioration of the Atlantic alliance and relations with European allies during the years of Donald Trump’s presidency. The increase of U.S. troops on European territory — which already amount to 100,000, the highest number since the end of the Cold War — is one explicit expression of this turnaround. As a “bonus,” Biden returned from his trip to Europe having struck an important deal with Germany and other European powers that will replace Russian gas with liquefied natural gas that they will buy from the United States, at a considerably higher price.

In a display of exaggerated imperialist optimism, Biden even promised a select group of American businessmen that on the basis of having achieved “a united front throughout NATO and in the Pacific” against Putin, a new world order is emerging that will be led by the United States. It was an indirect message to China.

But with the exception of what some antiquated thinkers like Francis Fukuyama are saying — that the war in Ukraine (and Russia’s defeat) is a second chance for the “end of history” — the reading of the international situation and its prospects is quite different. Even the IMF compares the impact of the war to an “earthquake.” Marxist economist Michael Roberts argues that the conflict between Russia and Ukraine (NATO) is stressing the international economy after the brief recovery from the pandemic, deepening inflationary pressures driven by rising energy, food, and other commodity prices. The risk of stagflation — inflation combined with recession — has become a real threat. And this may give rise to new episodes of class struggle, as we saw when in 2011 the events of the so-called Arab Spring unfolded in the face of rising food prices in many countries.

The war in Ukraine has opened a panorama of crisis unprecedented in recent decades. It is the closest thing to a “rupture of the capitalist equilibrium,” after the mirage of a world without wars between the great powers, created by the decades of neoliberal globalization. In this framework, it is necessary to confront this reactionary war by opposing both the Russian invasion of Ukraine and the warlike policy of NATO, from an anti-imperialist and internationalist perspective.

First published in Spanish on March 27 in Ideas de Izquierda.