PROSUR: The New Tool for U.S. Imperialism in Latin America

In March, Latin American leaders created a new international body, PROSUR. What is it, and what does it mean for the region? 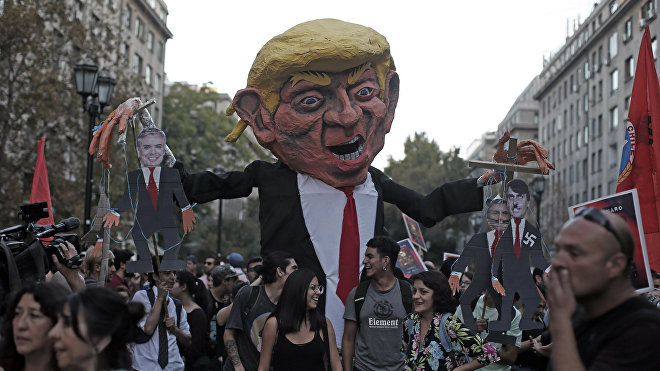 On March 22 in Santiago, Chile, presidents from seven Latin American countries, including Argentina, Brazil, Chile, Peru, Ecuador, Paraguay and Colombia, met to create a new international organization: Forum for the Latin American Progress and Development (PROSUR). The presidents of Uruguay, Suriname, and Bolivia observed the meeting while Nicolás Maduro, the president of Venezuela, was not invited.

The supposed purpose of this organization is “fostering regional cooperation and development in South America.” According to its founders, PROSUR is an economic agreement, not a political one. But this is untrue: PROSUR is the organizational expression of the right-wing shift in Latin America. Its representatives are united behind U.S. imperialism, they support further austerity policies to pay for the economic crisis that afflicts Latin America, and they plan to organize an offensive against Maduro’s presidency in Venezuela.

In February, Colombian President Iván Duque said, “It is very important that [the Union of South American Nations, or UNASUR], which has been a supporter of the dictatorship of Venezuela, be shut down.” UNASUR was created by the late presidents of Argentina and Venezuela, Néstor Kirchner and Hugo Chávez, seeking to foster cooperation between the Pink Tide governments, maintain capitalist profits and seek alliances with China while supporting some welfare reforms. The Pink Tide era is gone, and now the right-wing governments in Latin America seek alliances with the United States to implement austerity.

The presidents of Colombia and Chile proposed PROSUR as a replacement for UNASUR. PROSUR’s timing and origins are no coincidence, emerging in the context of the new wave of U.S. imperialism in Latin America expressed through the growth of right-wing governments that are working as direct agents of the United States. It is a direct response to the imperialist offensive to overthrow Maduro, attempting to organize Latin American countries around that agenda.

PROSUR as Part of the Offensive Against Venezuela

The emergence of PROSUR comes on the heels of an escalating imperialist offensive in Venezuela and cannot be read outside of that context. On January 23, U.S. forces organized an attempt to bring “aid” into the country at the Venezuelan-Colombian border. It was a clear attempt to turn the armed forces of Venezuela against Maduro and garner popular support within Venezuelan for Juan Guaidó, the U.S.-backed right-wing politician who proclaimed himself Venezuela’s president. This attempted coup failed, however, and the military continues to support Maduro. Although this was disguised as “humanitarian aid” and the “liberation” for the Venezuelan people, it corresponds to the long U.S. tradition of imposing its hegemony in the guise of humanitarian aid and of spreading “democracy.” The weaponized aid that the United States offered Venezuela was to be used by Guaidó to strengthen his political position, and it would have remained inaccessible to the thousands of Venezuelans who are in dire need of food and basic supplies.

The abrupt creation of PROSUR came after January 23. It should be no surprise, then, that Duque and Chilean President Sebastián Piñera, two open supporters of U.S. intervention in Venezuela, were the two major proponents of PROSUR, seeking to create an organization to economically further these attacks on Venezuela, as well as form closer relations with U.S. imperialism.

The formation of PROSUR comes a year and a half after the Lima Group was created, with similar goals. It is a 14-member group of both North and South American countries was created by the U.S. as a means to develop solutions for the crisis in Venezuela. The group unites majority right-wing, pro-imperialist governments and is an additional tool of the United States to legitimize their political and economic advances in Latin America. While PROSUR’s mission is more extensive than the Lima Group’s, focusing on economic policies, its agenda is the same: support austerity and U.S. imperialism and overthrow Maduro.

PROSUR as Part of the Revival of the Monroe Doctrine

The United States’ interest in Venezuela and the emergence of PROSUR come in the context of a reorientation of U.S. foreign policy toward Latin America. This refocusing of U.S. politics in the region has meant a return of full-on imperialist initiatives by the Trump administration and its right-wing allies. The United States has a long history of imperialist intervention in Latin America, through both military coups and economic pressure.

This has changed with the Trump administration, singling out the “Troika of Tyranny”: Nicaragua, Venezuela and Cuba as a focus of U.S. foreign policy. The justification for the Trump administration’s pivot toward Latin America is that the United States has neglected its backyard, allowing Russia and China to strengthen their hold on Latin American resources. John Bolton, Trump’s national security advisor, described this shift in U.S. foreign policy as a reinvigoration of the Monroe Doctrine, saying “In this administration, we’re not afraid to use the phrase ‘Monroe Doctrine.’ … This is a country in our hemisphere. It’s been the objective of presidents going back to Ronald Reagan to have a completely democratic hemisphere.” By “democratic,” Bolton and the Trump administration mean “subservient to U.S. imperialism”: There is nothing democratic about Guaidó’s self-proclamation as president.

The history of U.S. interventionism in Latin American is lengthy and ugly. The United States has long tried to hide its strategic interests in Latin American resources behind a narrative of humanitarian aid and democracy. The United States has supported and installed corrupt presidents, ruthless dictators, and outright genocides in Latin America in their efforts to strip the territory of its resources and subjugate the countries to U.S. economic and political domination. Any consideration that the United States has ever actually cared about the people of Latin America is based purely in falsities. We are much quicker in hindsight to see things for what they are and call out the U.S. advances in Latin America as imperialism. It is critical that we recognize Trump’s call for humanitarian aid and democracy in Venezuela for what it truly is, a strategy of U.S. imperialism to secure economic and political interests in the region.

The creation of PROSUR marks not only the cooperation between right-wing governments of Latin America in their attack against the working class but also a new era of full-force U.S. imperialism aimed at stripping workers of any advances they made during the United States’ relative absence.

The working class of Latin America will suffer the very real effects of the policies that PROSUR seeks to put forward: deepening dependence on U.S. imperialism, increased privatization and economic reforms that put the rights of corporations ahead of the general population’s. Plans to liberalize the economy even further and invite large companies to invest more in specific sectors like foresting, mining and oil are already underway. The United States seeks to secure its financial interests not only in Venezuela but in all of Latin America, at the expense of the working class, which will find itself in an even more precarious situation. This growth of industry proposed by the right-wing governments is made possible only by a new wave of offensives against the working class.

You may be interested in The U.S. Interventions in Latin America

Against Bipartisan Imperialism in the U.S.

Rejecting Trump’s intervention in Venezuela, one might look to the Democratic Party as the voice of opposition. Yet Democrats in all positions are expressing support for Trump’s “humanitarian” and “democratic” efforts in Venezuela, applauding the advances. Democrats such as Sen. Dick Durbin, Sen. Kirsten Gillibrand and Rep. John Delaney have all publicly expressed support for Guaidó and the actions of the Trump administration regarding Venezuela. Even Alexandria Ocasio-Cortez and Bernie Sanders have expressed support for U.S. intervention in Venezuela. Ocasio-Cortez described the crisis in Venezuela as “authoritarianism vs democracy,” but a U.S. intervention in Venezuela does not mean more democracy for the people of Venezuela; it means the opposite. Sanders, who announced his 2020 presidential campaign and has been called a champion of socialist policy, also supports the U.S. imperialism in Venezuela. This is unsurprising, though, since the Democratic Party has never been anti-imperial and has supported countless imperial advances, be it in the Middle East or Latin America. The Democrats are not part of the solution for Venezuela but rather part of the problem, and it is critical that we stop putting our trust in them to call out the Republicans. We have to acknowledge that both parties campaign for an imperial United States that puts the interests of the capitalists ahead of those of the workers.

The United States has its hands deep in the pockets of Latin America, and the imperial advances we see today have very real consequences for the continent’s working class and indigenous population. While the United States expands its economic interests and reach, workers are left with unlivable wages and increasing job insecurity, and indigenous populations are stripped of their land and rights, and they are killed for resisting. The populations living in the most precarious situations, the immigrants, the women, the LGBTQI+ people, the workers, the indigenous communities and the people operating at the intersections of all of these identities suffer the biggest blow.

The further expansion of U.S. economic power and control in Latin America would be peril for the Latin American population. The days leading up to the PROSUR meeting various protests, meetings were held across Chile in an effort to resist this advance of the right wing. The same protests, conversations and anger should have been present in the United States as well. The populations of Latin America are organizing and mobilizing to confront U.S. imperialism, but it is not their struggle alone. It is critical that from within the United States we organize a powerful anticapitalist and socialist workers party, independent of both the Republican and Democratic parties, in solidarity with the working class of Latin America and with an anti-imperial demand at its core.