Protesters Across U.S. Demand Safe Reopening of Schools in National Day of Resistance

On August 3, students, educators, and community-members across the U.S. took part in demonstrations to demand the “safe, racially just, and fully funded” opening of schools. 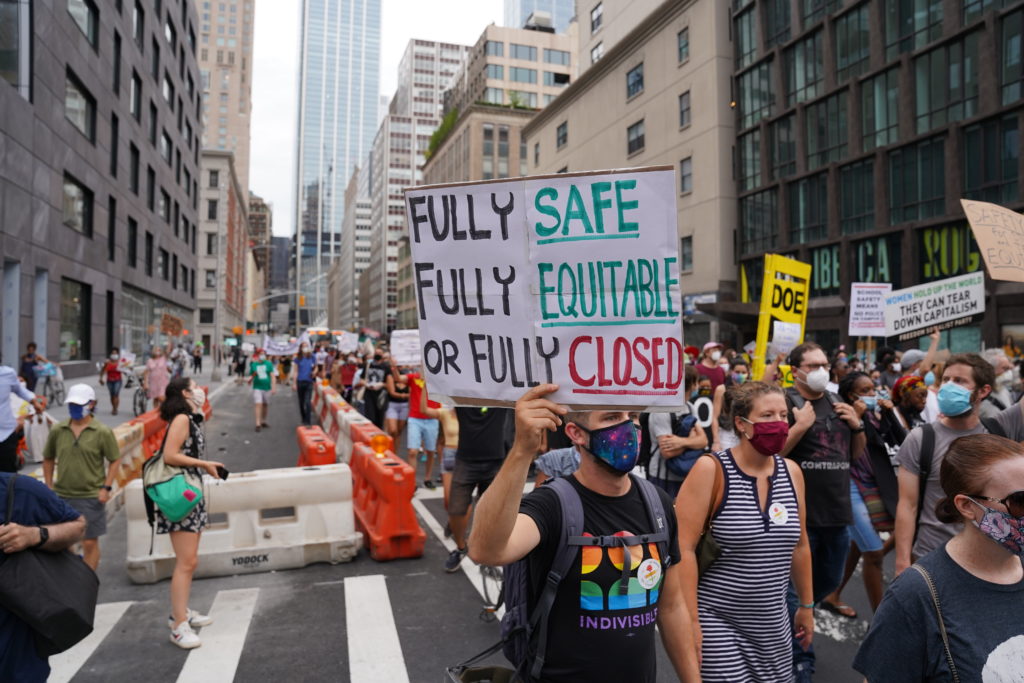 The Day of Resistance was organized by the Demand Safe Schools Coalition, which was first established under a primary mission to advance racial justice in public education, but the Coalition’s list of demands is endorsed by National Educators United, the Center for Popular Democracy, and the Chicago Teachers Union, among others.

On their website as of August 1, the CDC stressed in-person reopening of public schools as “critical” to preventing the widespread educational disparities that accompany remote learning. Cited challenges posed by an e-learning model include access to technology and adequate caregiver supervision, as well as lack of access to nutritional and social support typically available at public schools.

Approximately 30 million students rely on subsidized school breakfast and/or lunches daily prior to in-person closures, and 40 million Americans have filed for unemployment since March. The free meals and childcare available in public schools will only grow more urgently necessary as the Covid-19 pandemic and related nationwide housing crisis continues.

However, given the $637 billion dollar increase in net worth among America’s billionaires since March and the CDC’s own suggestion that school staff are at higher risk of contracting Covid-19 than students, it is difficult — if not impossible — not to ask who truly benefits from nationwide re-opening of public schools. Is it students? Working parents? Teachers? Or is it those who profited, and continue to profit, off of the American workforce?

At a National Day of Resistance event in New York City, Left Voice member and nurse Jillian criticized “the government officials and the policymakers, from de Blasio to Trump, the Democrats and Republicans— and the capitalists who really run this country, who are putting us back to work and who are putting us in a situation where more people will die.”

According to a factsheet available on the Demand Safe Schools Coalition’s website, the estimated cost of safe reopening amounts to just below $1.8 million per U.S. district. In order to fund safe reopening, the Day of Resistance demands a “massive infusion of federal money […] funded by taxing billionaires and Wall Street.”

More information about the National Day of Resistance Against Unsafe Openings and the Demand Safe Schools Coalition is available at demandsafeschools.org.