Protesters Camp Out to Stop Eviction in Brooklyn

Nearly 100 people are currently camped out in front of a Brooklyn residence to halt an attempted eviction. 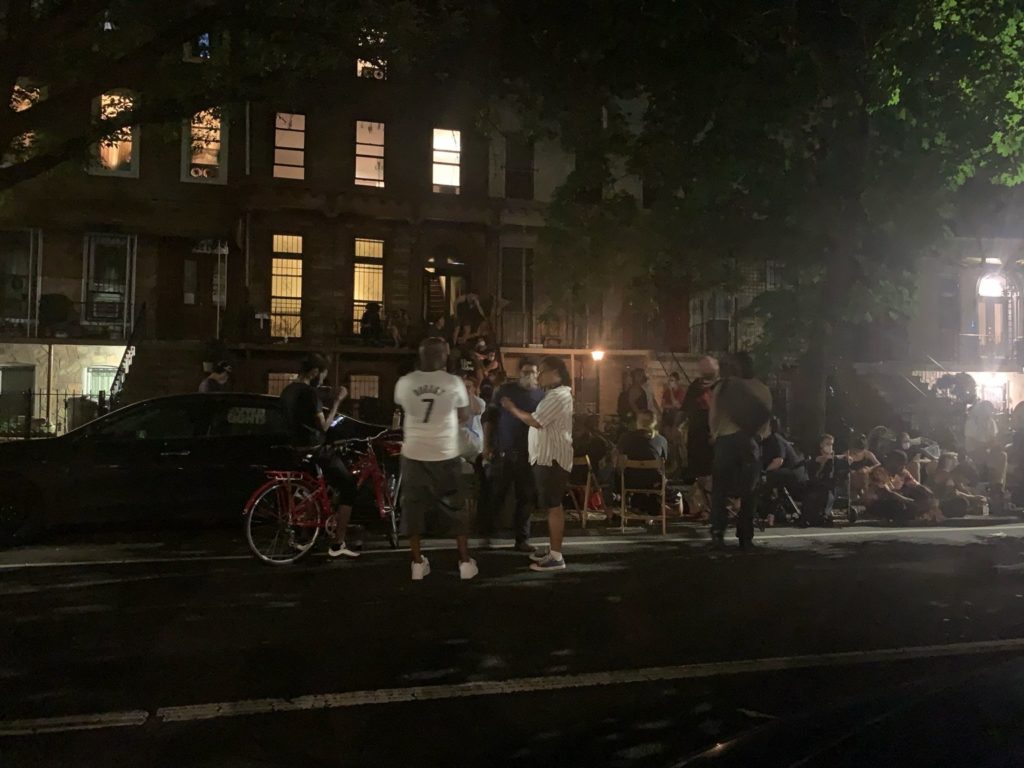 “No landlords, no cops, all evictions have to stop.” Such went the chant repeated by protesters who gathered in Brooklyn on Tuesday night to defend tenants against eviction. The stand-off lasted all night as folks poured in from all over New York City in response to a call put out by various groups on Instagram to stand in solidarity with those facing eviction. In this particular case, the potential eviction is even more egregious as it took place without a written notice or court date. In addition, the apartment itself was being unlawfully rented. In short, the attempted eviction is not just inhuman — as all evictions are — it is also illegal.

When it became clear that the tenants weren’t leaving without a fight, the landlord called in private security to threaten the tenants, in clear violation of housing law. However, when they showed up, they were met by a large group of protesters who refused to let them intimidate and brutalize the tenants. Facing stronger than expected resistance, the security was forced to leave. This came after mobilizations earlier in the day against evictions at the housing court.

In Brooklyn, NY, protesters have gathered outside 1214 Dean street, where the landlord is forcibly and illegally trying to evict tenants.

Protesters have been there for hours trying to stop it, and are likely going to stay through the night.#CancelRent #EvictionFreeNY https://t.co/e1NvwO8O5m

The tenants in Brooklyn are currently facing eviction from a landlord who owns property and businesses across the city and who proudly admits to being a gentrifier in the same breath that she complains about the high cost of rent. She, like countless landlords and corporations across the city, makes massive profits off of the human need for shelter. Meanwhile, hundreds of thousands of working class and poor people across New York City — and hundreds of thousands more across the country — are struggling to pay rent in the middle of a deepening economic crisis. Now that housing court has opened in New York City, many of those people face being thrown out of their homes if they cannot pay their landlords.

It is likely, as the economic crisis worsens, that more and more working class and poor people will be threatened with evictions and homelessness. Because of this the actions of Tuesday night are even more important. The people of New York showed the landlords that they aren’t going to sit idly by while their neighbors are thrown out of their homes. People are going to fight evictions and their exploitative landlords tooth and nail, blocking police from entering and camping out all night to make sure that people remain in their homes.

Many of the people who showed up to help resist the eviction have recently taken part in the City Hall Encampment (CHE) or, as it is now known, Abolition Park. Protesters have been staying in the park across from City Hall for two weeks, in protest of racist police violence and the NYPD budget. That these movements are overlapping is not coincidental. More and more, people are realizing that struggles against societal injustices are interconnected. The system that unleashes murderous police on communities of color is the same system that throws members of those same communities out on the streets. It is no coincidence that, on the court house across from the City Hall Encampment, one of the most prominent pieces of graffiti reads “Cancel Rent, None of Us Are Free Until All of Us Are Free.”

Some of the main forces fighting the eviction on the ground were Equality for Flatbush — an anti-gentrification group — and the Crown Heights Tenants Union (CHTU), who recently wrote a powerful statement in support of the movement against police brutality taking place across the country. Members of CHTU, like protesters at CHE, are realizing that each struggle represents an individual battle in the larger fight against capitalism.

This kind of solidarity is what is needed to combat the growing crisis. More tenants unions must join with CHTU and support the movement against police terror and structural racism. More activist groups must show up to protect those facing evictions. Labor unions must use their strategic positions to call strikes to demand rent cancellation and stop all evictions in the city. The capitalists want us to pay for their crisis and, as it worsens, things will only get worse for the working class. There will be more evictions, more people unemployed, more repressive violence from the police. This unified assault on the most marginalized can only be combated with a unified defense from the working class. We must organize and fight together to stop the evictions!