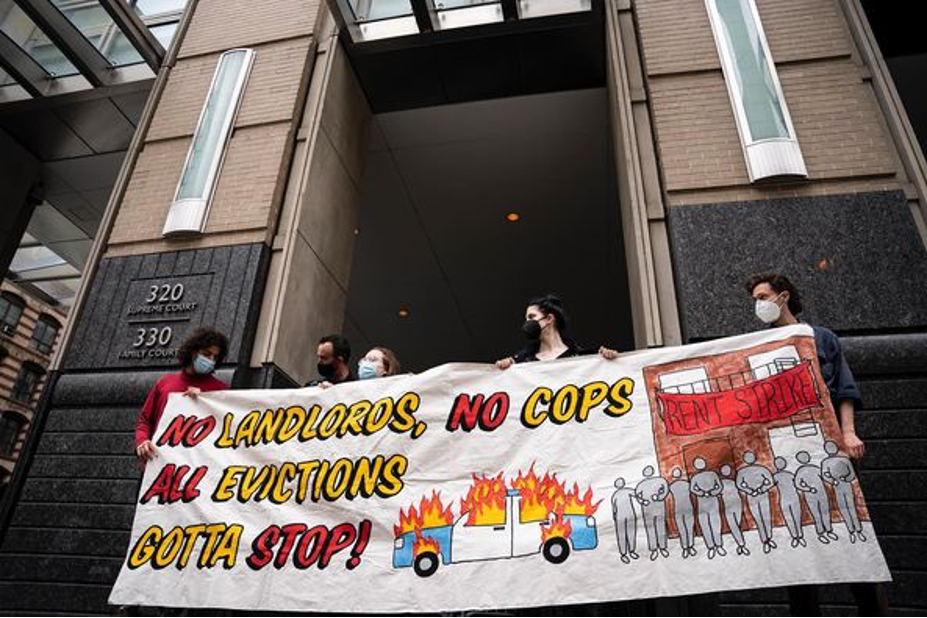 In December 2020, Governor Cuomo announced an eviction moratorium until May 1, 2021. The New York State Assembly was supposed to extend the moratorium to August 31st in April so that there would be no lapse in tenant protection, but a “technical error” led to a failure to vote on the issue. The vote was scheduled for April 28th so that the moratorium would not actually run out on May 1st. A spokesperson from the state Office of Court Administration told The City that courts would essentially ignore the lapse caused by the failure to vote, “confirming that cases will be paused until the moratorium is back in place.” But we now know that that was a lie.

As a result of these events, there were 22 eviction trials scheduled for May 3rd. These tenants almost lost the right to a roof over their heads because of a mere drafting error. We don’t know how many people would have actually been affected, as many of these tenants may have been in multi-generational family homes. At 5 p.m., six hours after the court was effectively and peacefully shut down by protestors, the legislature finally passed the bill to officially extend the eviction moratorium through August 31st.

Not extending the moratorium in New York in time to avoid a lapse in tenant protections explicitly went against the CDC’s own moratorium, which lasts through June 30th. Furthermore, New York State has $2.4 billion in federal rent assistance provided by the federal government. Reprehensively, New York’s COVID-19 Emergency Rental Assistance Program, or “CE-RAP,” has yet to distribute any of these funds. This is completely unacceptable and immoral, and groups like the Crown Heights Tenants Union, Brooklyn Eviction Defense, Art Against Displacement, Radical People’s Assembly, and other community supporters and tenants made sure that the courts knew it by showing up in solidarity, and shutting them down.

Protestors gathered in front of the Kings County Supreme Court at 320 Jay Street in Brooklyn, chanting and peacefully blocking multiple entrances. They moved to block the adjacent intersection, and then one lane of the Tillary street off-ramp to the Brooklyn Bridge. Finally, the protesters returned to the intersection of Jay and Johnson, once again blocking all traffic going past the Supreme Court. Protestors booed and shouted “shame” as the NYPD brought paddy wagons and arrested 12 peaceful protestors shortly after 11 a.m.

These temporary freezes do not even constitute a moratorium on all evictions. As early as February, New York courts have been upping the number and variety of eviction cases on their dockets. Nakeeb Siddique, Director of Housing for the Brooklyn Neighborhood Office of the Legal Aid Society, spoke to Law360 and said, “The court is really trying to move these cases, in the sense of having something happen in them, even if there is not a possibility at the moment that the tenant is subject to eviction.” The collective message of the May 3rd action, a display of community self-defense, was a call to abolish private property. Clearly, this is the only way to end the housing crisis for good.

Yesterday’s action was the eleventh time since the global Covid-19 shutdown of March 2020 that Brooklyn Supreme and Family Court eviction trials were halted by community members in solidarity. Because of the brave actions by these individuals yesterday, 22 eviction cases did not go to trial. As the press release for the action stated: to get to our neighbors, you have to go through us. When organized tenants come to each other’s defense, we all win, and capitalism loses.