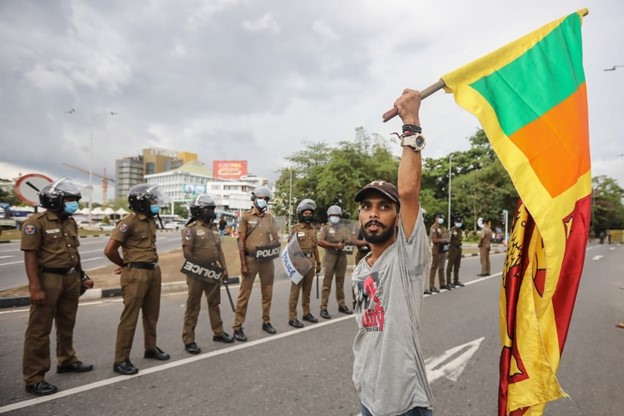 Thousands of people took to the streets this Thursday in the capital of Sri Lanka against the increased cost of living, which has exacerbated a deep, months-long economic debacle, as well as the government’s agreement with the IMF that will involve new economic adjustments.

The protest, organized by the Union Coordination Center (TUCC), was one of the largest since the Sri Lankan president, Ranil Wickremesinghe, took office last July after former president Gotabaya Rajapaksa was ousted and fled the country.

Wickremesinghe himself is an illegitimate leader for the people of Sri Lanka. He was elected by a discredited parliament that secretly voted for him to replace Rajapaksa. So far, Wickremesinghe has continued repression while seeking to negotiate an agreement with the International Monetary Fund (IMF) that will bring greater attacks on the living conditions of Sri Lankans.

In September, the IMF “warned” Sri Lanka that the initial agreement to grant about 2.9 billion dollars in an urgent rescue program is “only the beginning of a long process that the country must follow to get out of the crisis.” A process that will include fiscal adjustments and reforms in the interests of capital that will only further devastate the Sri Lankan working class.

Those who took to the streets this Thursday protested the escalation of food prices on the island, which has caused a deterioration in the quality of life for the 22 million inhabitants of Sri Lanka, while facing the worst economic crisis in its history due to foregin debt and the shortage of international currencies.

According to the latest data from the Central Bank of Sri Lanka, year-on-year overall inflation reached a record figure of 73.7 percent last September, while food inflation stood at 85.8 percent.

In a parliamentary session, Wickremesinghe acknowledged that the island’s economy has collapsed completely, especially in recent months in which there have been shortages of fuel, raw materials, and power outages.

The protesters are demanding Wickremesinghe’s resignation, just as they demanded the resignation of his predecessor a few months ago.

In the face of the deep crisis and the prospects of more economic hardship for the Sri Lankan people through the IMF’s austerity policies, Wickremesinghe’s response has been increased repression of the protesters.

But this does not seem to be enough to pacify the people of Sri Lanka. The government’s repression has not been able to stop protests, strikes, and clashes, and nothing indicates that that will change anytime soon.

Originally published in Spanish on October 27 in La Izquierda Diario.