Friday marked yet another day of demonstrations in Peru against the newly appointed government of Manuel Merino, which is beginning to lose much of the parliamentary support that put it in office after voting to oust Martin Vizcarra. 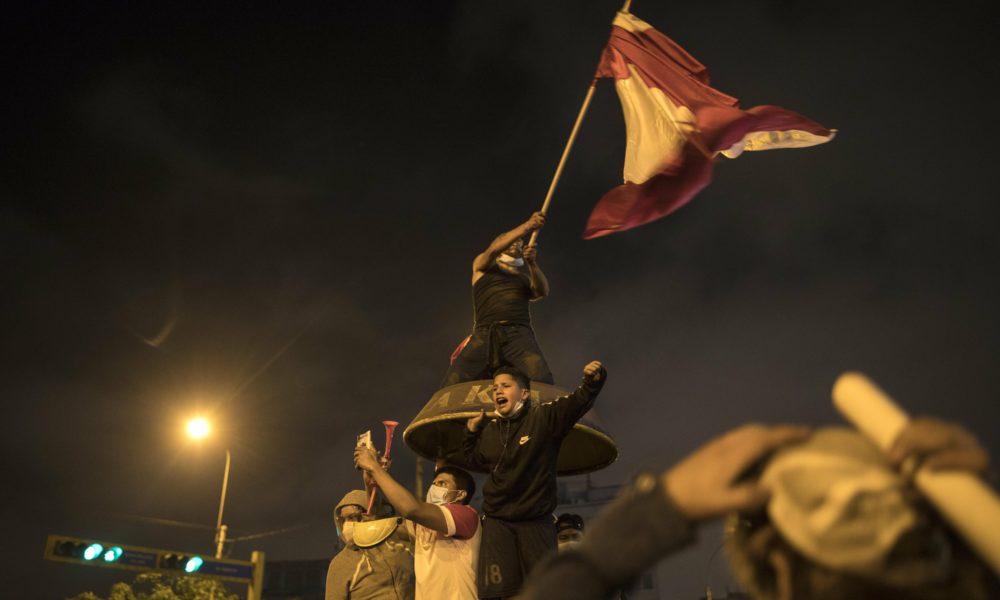 Protests continued in Peru against new President Manuel Merino, who took office after the former president Martin Vizcarra was removed by Congress. It was the fifth night of such protests.

On Friday, the first real cracks in support from political institutions for the transitional government in Peru began to show — on top of its massive rejection in the streets and the condemnation of the repression that has been unleashed against the mobilizations.

After protests on Thursday across the country, two groups in Congress that had in principle supported Merino’s takeover announced they would vote “no confidence” on the new cabinet led by conservative Antero Flores-Aráoz. Meanwhile, Merino chose to remain silent despite criticism of his legitimacy, with England, the United States, and Spain all questioning the new government.

Merino, who was the president of Congress, was sworn in Tuesday as Peru’s transitional president after 105 of 130 legislators impeached Vizcarra on the grounds of “moral incapacity.” This followed allegations, still under preliminary investigation, that he took bribes when he was governor of the Moquegua region from 2011 to 2014.

However, despite solid parliamentary support for throwing Vizcarra out, many Peruvians believe that the president should be allowed to serve out his term and are beginning to question the political regime that removed him. This has been reflected in mass protests across the country against Vizcarra’s ouster, against Merino’s takeover, and against the political class in general.

The demonstrations opened the first crisis for the political bloc that supported Vizcarra’s removal. On Friday, the Agricultural People’s Front of Peru (FREPAP) became the first party to announce that it would not support the new ministerial cabinet. FREPAP’s spokeswoman, María Teresa  Céspedes, declared that the 15 members of her group that voted in Congress for the president’s dismissal would vote “no confidence” in the cabinet because “the people are not supporting it.”

Shortly after her announcement, the Frente Amplio (Broad Front) party — six of whose eight members of Congress had voted for Vizcarra’s impeachment — declared that it would also reject giving approval to the cabinet.

Despite this tremendous political instability, Merino has made no public appearances or issued any pronouncements in the last few hours. But in a statement published by local media, he said he wants to “keep the party free of responsibility for any act of government” and made assurances that in last Monday’s vote all the members of his Popular Action (AP) party acted “with full freedom of conscience, total independence, conviction, and free from any influence of the party.” The declaration came after the AP affirmed on Thursday that its members of Congress had been pressured to vote for impeachment under the threat that their bills would not be approved.

The fall of Martin Vizcarra takes place within the context of a deeper and longer political crisis that traces its origins to the 1993 regime. Such a context helps explain why, since the revelations in 2016 of Odebrecht’s relationships with Peruvian politicians and state officials, many former presidents have ended up in prison and one even committed suicide to avoid serving his sentence.1

The protests in the streets add a new element to the crisis of political instability since Vizcarra’s ouster. Challenges to the political regime could spread without a clear way out.

It is no accident that the U.S. Embassy in Lima issued a statement saluting the Peruvian government’s “commitment” to hold elections next April after ousting Vizcarra. In the same sense, Christina Gallac, Spain’s secretary of state for foreign affairs declared that Peru “must find stability and comply with the electoral commitments it has pledged for next year.”

First published in Spanish on November 14 in La Izquierda Diario.