Protests Continue in Belarus as Opposition Leader is Abducted

Thousands in Belarus continue to protest the Lukashenko government. The abduction of opposition figure Maria Kolesnikova has exacerbated the crisis. 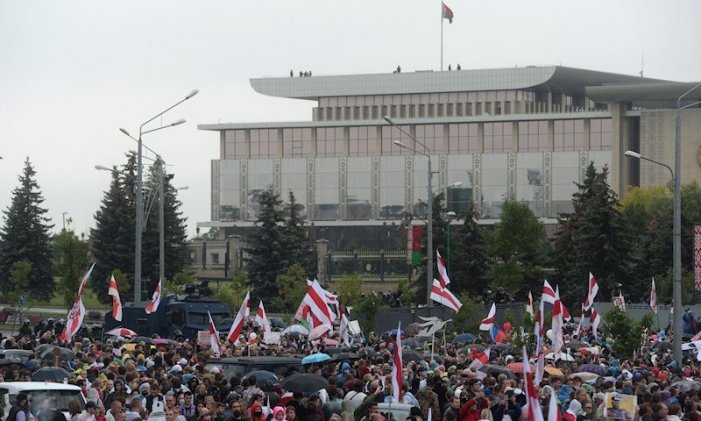 On Sunday, thousands of people took to the streets of Minsk, the capital of Belarus, to protest the recent presidential elections which saw the reelection of President Alexander Lukashenko. The elections are widely suspected to have been rigged in Lukashenko’s favor. More than 100,000 demonstrators marched to the president’s residence to demand his resignation. Riot police wearing ski masks arrested 633 people, while groups of pro-government thugs beat protesters.

The demonstrations began after the controversial August 9 elections, in which Lukashenko, who has ruled the country since 1994, won with over 80 percent of the vote. This landslide victory was rejected by opposition parties and thousands of people who suspect electoral fraud.

According to the official count, Lukashenko got 80.1 percent of the votes, followed by Svetlana Tikhanovskaya with 10.12 percent. The other three opposition candidates together garnered a little over 4 percent. Tikhanovskaya went into exile in Lithuania after the election to avoid being arrested.

Despite the government and police threatening repression, the protests did not stop. The Ministry of Internal Affairs warned that measures would be taken to “prevent illegal actions,” while the government deployed fire trucks around the city together with police armed with shields and sticks. Videos posted to social media networks showed demonstrators carrying the historic white- and red-striped flag — appropriated by the opposition after the fall of the Soviet Union — chanting “Belarus lives” as they advanced through the center of the capital.

On Sunday afternoon, in comments to the Sputnik news agency, the spokesperson of the Belarusian Ministry of Internal Affairs, Olga Chemodanova, estimated the number of demonstrators arrested during the protest at “hundreds,” but that the ministry did not know the final number.

On Monday, in a move which exacerbated tensions, unidentified masked men kidnapped one of the main figures of the Belarusian opposition, Maria Kolesnikova. Kolesnikova was snatched from the street in the center of the capital, and taken away in a van, witnesses told local media.

Kolesnikova is a very prominent political figure within Belarus. She is one of the campaign partners of opposition candidate Svetlana Tikhanovskaya, and a leading member of the Coordinating Council, a political body composed of 600 opposition members to coordinate the peaceful transition of power from Lukashenko and to hold new elections. Lukashenko has refused to dialogue with the Council, and its members have been targeted by Belarussian authorities in recent weeks.

According to reports, Kolesnikova was detained shortly after 10 a.m. while walking near the Belarusian National Arts Museum in Minsk. Anton Rodnenkov and Ivan Kravtsov, two other members of the Coordinating Council of the opposition, also disappeared.

On Tuesday, Rodnenkov and Kravtsov reappeared in Kiev, Ukraine. In a press conference, Rodnenkov said that he and Kravtsov had been interrogated and then accepted a deal to leave Belarus. However, Maria Kolesnikova allegedly refused to cross the border, and tore up her passport in protest. Her whereabouts are currently unknown. The abduction is an attempt by Belarussian authorities to suppress the protest movement, but it is a risky move that will likely exacerbate the demonstrations.

In the days following the August 9 vote, security agents dispersed tear gas, rubber bullets, water cannons, and stun grenades at demonstrators protesting alleged election fraud. Thousands of people were arrested, hundreds were injured, and at least three died. Since then, the violence has abated, but the protests continue and have spread to different sectors, including to industrial workers who went on strike. The involvement of the workers’ movement had initially posed a grave challenge to the government, but the workers were eventually pressured to end the strike due to threats of mass dismissal.

Lukashenko’s government says it is trying to avoid a “color revolution,” in reference to the mass movements that took place in the former Eastern Bloc in favor of pro-Western liberal programs. He has also accused foreign powers of interfering in Belarussian affairs and helping to orchestrate the protests.

Secretary of State Mike Pompeo warned last Wednesday that the U.S. and European allies are considering imposing sanctions against the Belarusian authorities responsible for repressing the protests. The Belarusian opposition is encouraging these measures, but the sanctions will only put the Belarussian working class in an economic stranglehold. Workers need their own agenda, independent of the liberal opposition, to overthrow the Lukashenko government.