Protests in Kyrgyzstan Catapult the Country into Political Crisis

A political crisis in Kyrgyzstan has generated tumult in the former Soviet Republic. As tensions rise, Russia and China, who have geopolitical interests in the Central Asian country, confront growing regional volatility and global disorder. 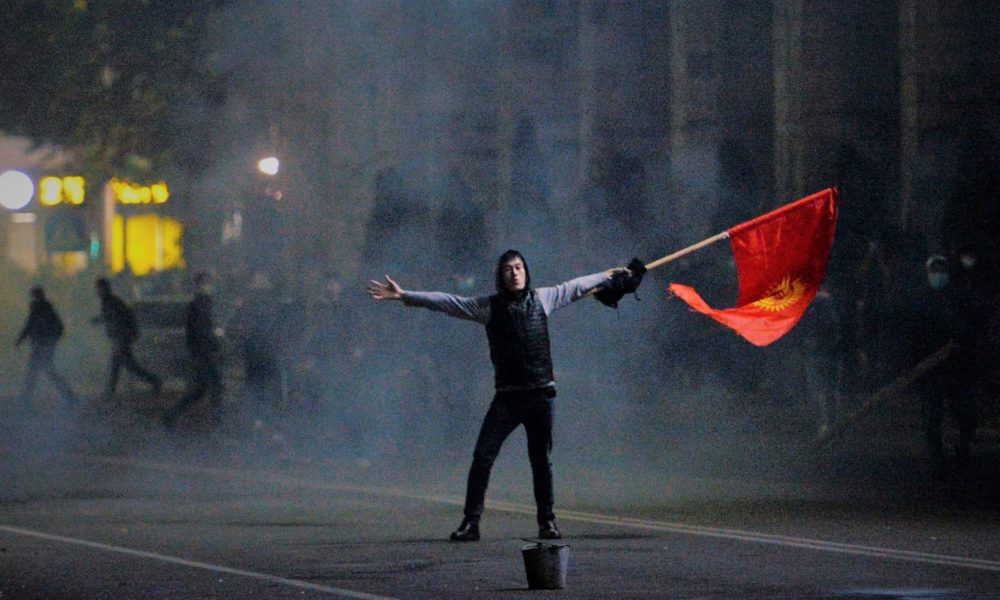 On Monday October 5, the day after Kyrgyzstan held parliamentary elections, around 20,000 people protested in Bishkek, the country’s capital, in response to electoral fraud. Central Asia’s only democracy faces a deepening political crisis which has pressured Kyrgyz President Sooronbay Jeenbekov to flee the presidential palace.

This social outburst was generated by doubts around the transparency of the parliamentary election held on October 4. Concern over the elections grew after only four political parties out of 16 had passed the threshold for entry into parliament. Three of the four had close ties to President Jeenbekov. Sunday’s election was also marred by reports of vote buying and fraud throughout the former Soviet Republic.

Demonstrations that broke out Monday in several cities of Kyrgyzstan were met with government repression. So far at least one 19 year old protester has been killed and more than 700 have been injured. Police and security forces used water cannons, pepper spray, and rubber bullets against protesters at Ala-Too Square.

Sovietskaya/Kievskaya. Video from friend. Looks like the protestors overwhelming the police. pic.twitter.com/x7lqav2meA

By Tuesday morning, protesters reclaimed control of the Ala-Too Square in central Bishkek and also managed to take over several official buildings, including the Presidency, the Government, the Ministry of Interior, the State Committee for National Security, the City Hall and the central TV facilities. While inside, demonstrators burned portraits of the country’s main leaders and threw paper from windows.

#Kyrgyzstan 🇰🇬: footage from inside the Kyrgyz parliament building in #Bishkek pic.twitter.com/RuwYguaWmY

On Friday, President Jeenbekov, who remains in hiding, imposed a state of emergency until October 21 in an attempt to reassert his battered authority and deployed members of the military “to organize checkpoints, to prevent armed clashes, to ensure law and order, and to protect the civilian population.” At the same time, Jeenbekov’s principal opponent, ex-President Almazbek Atambayev, was arrested again just days after leaving prison.

The move came as violent clashes erupted between supporters of various opposition parties on Friday. As Kyrgyzstan becomes embroiled in a chaotic and politically volatile situation, the country also faces a power vacuum. The Central Election Commission annulled the result of the parliamentary elections, Kyrgyz parliamentarians have launched impeachment procedures against Jeenbekov, and Prime Minister Kubatbek Boronov resigned in the face of the protests as well as the mayors of Bishkek and Osh, the second largest city of Kyrgyzstan.

With last weekend’s elections declared invalid, several coordination councils have been formed in an attempt to carry out a transfer of power. Jeenbekov’s allies in Parliament appointed Sadir Zhaparov, as prime minister today, but political legitimacy is still under threat as opposition parties are not expected to back down from protests.

As in other post-Soviet states, Kyrgyzstan experienced very uneven social and economic dynamics as it stepped into a market economy at the start of the 1990s. Despite having a multi-party system unlike neighboring countries, organized crime has had a symbiotic relationship with the political world for years with criminal allies of political elites engineering election wins for their political clients. But revolts in 2005 and 2010 and enduring economic problems have resulted in a weak state. The increasingly fragmented political system has created space for organized criminals to play an exceptionally powerful role, allowing for mob rule to spread across the country at the expense of the marginalization and misery of a large majority of the population. Criminal groups have attacked and seized several gold and coal mines in Issik Kul, Naryn and other regions. In some cases, they set fire to equipment and physically attacked workers.

The timing of the turmoil is not accidental. Kyrgyzstan, the second-poorest country in Central Asia and one of the poorest in the world, has been hard-hit by the coronavirus pandemic and a deteriorating economic situation.

“The government didn’t cope with the pandemic, there was no help for us from the authorities,” said Nur, a 20-year-old student protester.“ They gave us a sack of flour, and told us to survive until the end of the pandemic.”

The country is economically reliant on remittances from workers abroad, agriculture, and  several foreign-owned gold mines. The pandemic-driven border closures hit the economy of the mountainous nation and workers’ incomes hard due to a heavy reliance on Russia and China for work opportunities among migrant workers. Border closures by both countries led to a 15 percent drop in remittances, one of the most notable economic shocks among remittance-reliant nations. At the same time, the pandemic slashed trade with China, another key driver of the Kyrgyz economy which had for decades thrived as a regional hub for Chinese consumer goods and supplies for manufacturers.

The small landlocked country has been the subject of geopolitical competition between Moscow, Beijing, and Washington since its independence in 1991. Kyrgyzstan was home to a U.S. military base during much of the war in Afghanistan, but it was closed in 2014 following pressure from Russia. The Kremlin currently has an air base in Kyrgyzstan and has considered plans to expand it. As a key foreign power with interests in Kyrgyzstan, Moscow has attempted to broker regional disputes in the past but it was unclear how the Kremlin would intervene in the fluid situation in the republic. The crisis in Kyrgyzstan is part of a scenario of high regional volatility, where Russia seems to have lost influence and control within its periphery, which is already being expressed in the Belarusian crisis and the Armenian-Azeri confrontation.

China, which has developed extensive investments in rail and energy infrastructure and owns close to half of Kyrgyzstan’s external debt, faces obstruction of its commercial interests in the unstable country.

The movement is characterized on the one hand as a movement led by dissatisfied young people, confronting an oppressive regime that condemns them to misery and manipulates the electoral process with impunity, similar to protests in Belarus, but also in Lebanon, Chile and Iran. On the other hand, there is the dispute for power between very influential criminal gangs, which have taken advantage of the weakened political system and can mobilize a sector of society supported by extensive patronage networks, clientelist links with the state bureaucracy, the security forces, and traditional political organizations.

In the face of the undemocratic regime dominated by capitalist interests, and influence from U.S., Russia, and China, worker organization and a concrete project of political power is needed. Democratic self-organization like the “kurultais” that emerged in the 2010 uprising in Kyrgyzstan can be a step forward for the movement. But the working class in Kyrgyzstan should seize the opportunity to realize its own power and build its own organizations for the most oppressed and exploited classes of society in Kyrgyzstan and the rest of the region.