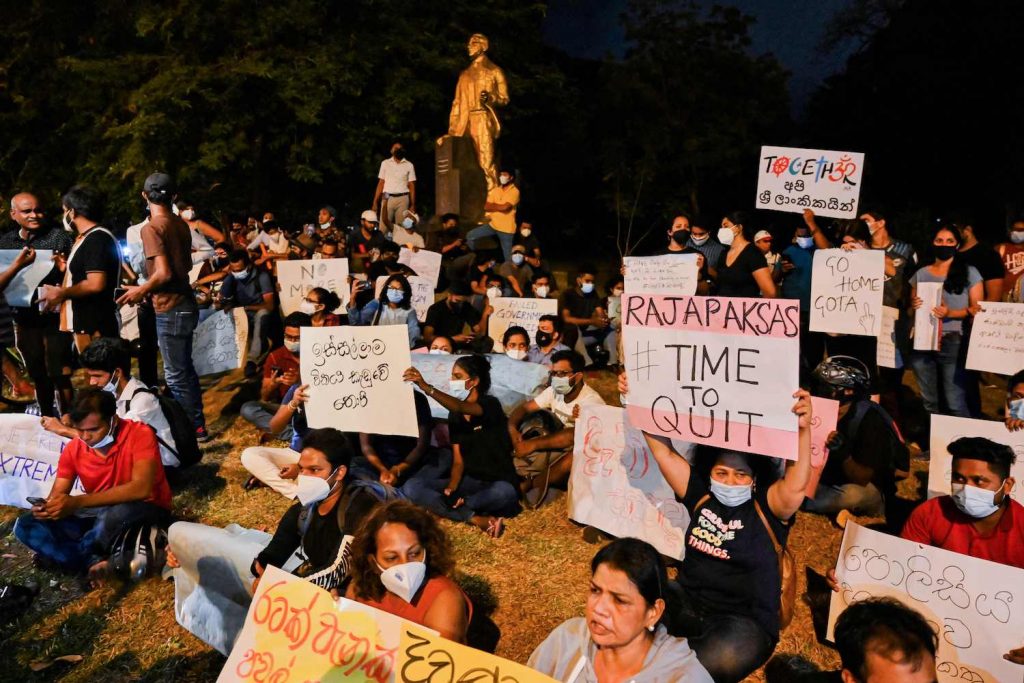 Protestors hold banners and placards during a demonstration against the surge in prices and shortage of fuel and other essential commodities in Colombo on April 1, 2022. (Photo by Ishara S. Kodikara / AFP)

In the face of increasing protests against the government, Sri Lankan president Gotabaya Rajapaksa has declared a state of emergency across the country. Fueled by a 13-hour long power cut amid a spiraling crisis of historic proportions, hundreds stormed Rajapaksa’s home this past Thursday. With intensifying anger over the government’s mishandling of the economic crisis, protesters demanded with chants, signs and slogans that Rajapaksa and his entire cabinet resign immediately.

The state deployed riot police who used tear gas and water cannons to disperse the crowd. Protesters, in response, set fire to an army bus and police vehicle. Over 40 people were arrested and 50 people were injured during the protests. In order to control the protests, the state declared a curfew.

The protests mark the latest chapter in an economic situation that has been worsening over the last few years. The current crisis, the worst in decades, has caused huge shortages in food, fuel, and energy, with the country experiencing 10- to 12-hour long power cuts every day.

In the years before the pandemic, the country saw a downturn in tourism — which accounts for 10 percent of the GDP — due to domestic turmoil. As Covid-19 spread across the world and tourism further declined, so did the nation’s revenue. The pandemic exacerbated the country’s long-brewing “balance of payments” problem, especially after the deep tax cuts implemented by Rajapaksa after he took office in 2019. Now, the nation’s foreign reserve is depleted, shrinking to less than $2 billion in February, which was only enough to pay for another month and a half’s worth of imports. The country, meanwhile, is also burdened with foreign debt repayments, of which $7 billion is due just this year and $1 billion due by July.

A net importer of goods, the island nation relies heavily on the import of basic commodities, including medicine and numerous food items. Now, with foreign reserves drying up, the country has severely restricted imports on what it deems “non-essential”, including milk products like butter, cheese, yogurt, fish, and fruits.

The crisis has only accelerated in the last few weeks, and shows no sign of slowing down. There are now acute shortages of food, fuel and cooking gas. Inflation now is at over 14 percent and food inflation is at over 25 percent. Out of diesel and oil, many have abandoned their cars, and public transit is taking a hit. Schools have canceled examinations due to paper shortages. Many state-run hospitals have stopped surgeries as they run out of essential medicines, and most have stopped diagnostic tests due to chemical shortages. Power outages of up to 13 hours also makes it impossible for many people to work.

Rajapaksa’s proximity to China has also created tensions after they claimed an area of 270 hectares in Sri Lanka to build an international port. The area is a strategic location of transit between Asia and the West.

The crisis in Sri Lanka must be understood within the current context of the war in Ukraine, one which has had a profound economic effect on the country. A quarter of people who arrived in Sri Lanka as tourists this year were from Russia and Ukraine. Additionally, Russia was the second largest buyer of Sri Lankan tea, even in 2022. Both tourism and tea exportation were reported to bring in more than $260 million in foreign currency, according to India Times.

In order to find a way out of the situation, the Rajapaksa government is looking towards the IMF and the World Bank for a bailout. In anticipation of their meeting in April, the government has devalued the Sri Lankan rupee against the U.S. dollar by 50 percent, leading to more inflation and rise in prices of goods, especially fuel.

The opposition forces are calling for the government to resign but, as of now, there isn’t an alternative that provides a working-class solution to the crisis. While there is public debate over the foreign debt, it is only within the realm of whether to refinance or completely restructure the whole debt; foreign investors are pushing for the latter. Both these solutions only represent more misery for Sri Lankans, especially because they’ll come coupled with more austerity measures that will further squeeze the working class.

The need for the cancellation of foreign debt for Sri Lanka — as with all countries affected by this imperialist mechanism of exploitation and extortion — becomes more potent, along with the need to nationalize strategic industries to cut off the dependence on imperialist powers. Along with the burden of the foreign debt, the war in Ukraine is further exacerbating the crisis and suffering for the masses around the world. Only the international action of workers around the world can stop it.