7KOS activists respond to harsh criticisms from the leadership 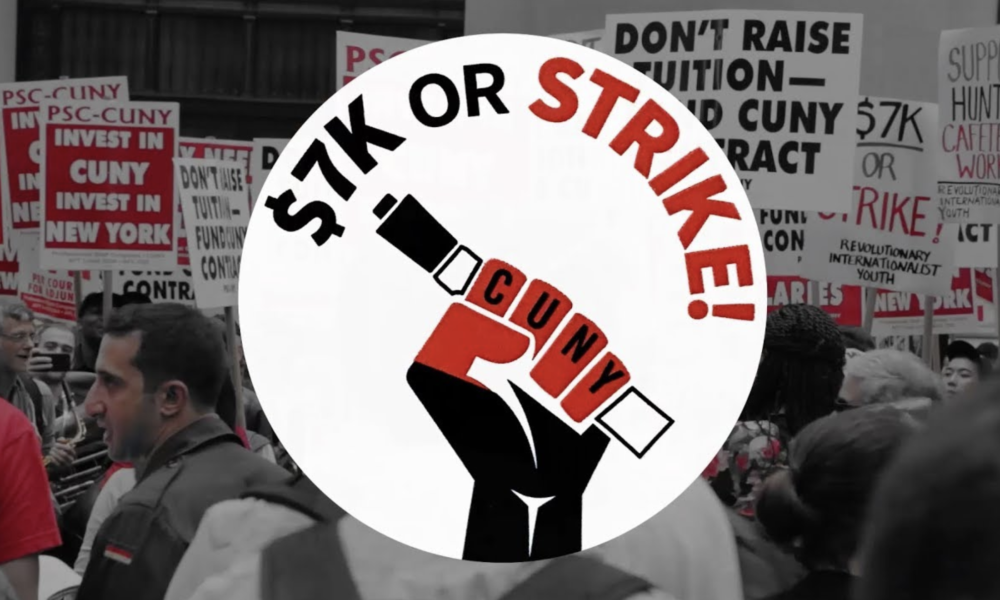 For more than two years rank and file activists in the PSC CUNY union have been organizing around a bold demand to end adjunct exploitation at the City University of New York (CUNY).  This demand, known as “$7K or Strike,” has quickly become the rallying cry for hundreds of adjunct activists fed up with the current leadership’s two-decade-long failure to close the massive wage gap between full time faculty (who regularly make six figure salaries) and the army of low-paid adjuncts who teach the vast majority of undergraduates at CUNY and earn only $3,200 per course (a little more than $22,000 a year for a full-time course load). Thanks to the hard work of these activists, the union has adopted the demand for a $7,000 minimum per course wage for all CUNY adjuncts. While the union has formally adopted the demand for $7K, the union leadership, seemingly paralyzed by the NYS Taylor Law, which prohibits public sector strikes, has refused to say whether or not they are willing to support a strike in order to win that demand, continually affirming that “$7K or strike” is not the position of the union. Indeed, the leadership has not only outright rejected the slogan of the rank and file, which have passed resolutions in more than 10 campus union chapters affirming the willingness of members to strike to win, but have begun to attack and slander those activists who have been organizing around it.

On Thursday, March 21st, the four principal officers of the PSC CUNY union, which represents more than 30,000 faculty and staff at CUNY, issued a formal statement to all of its members condemning what it called the deceitful tactics of a small group of $7K or strike activists. The letter claims these activists are guilty of “insulting, confusing and alienating [their] fellow members” about the real position of the union. They argue that $7KOS activists have appropriated union tactics and graphic designs, have presented themselves as union leadership to the media, and have misrepresented chapter resolutions as the position of whole chapters. Although none of these claims is accurate, they are all grounded in an interpretation of unionism in which activism and debate are closely controlled by a small group of leaders, who are supposedly “charged” with making decisions for the rank and file.

As PSC President Barbara Bowen said in a recent Jacobin interview: “Whether the PSC will need to take [a strike authorization vote] again depends on the assessment made by the bargaining team and the union’s leadership bodies. If the union reaches a point in the current campaign where a strike authorization could be necessary, we will have an open discussion and a vote in our largest leadership body, the Delegate Assembly.” In other words, don’t worry: the leadership will tell the members when they’re ready for a strike. This top-down approach has been one of the key weaknesses of labor unions since their inception.  Indeed, creating a strict line between “leadership” (tasked with making all of the decisions) and the “rank and file” (whom are supposed to patiently wait to be mobilized when told) is one of the primary ways that union bureaucrats maintain power and control expectations and thus one of the main ways that unions have been absorbed into the very systems of exploitation they were designed to struggle against.

Because Left Voice stands with the rank and file union members and not the union bureaucracy, we are reprinting the response to the leadership’s letter below. If you would like to read the original letter, you may find a copy on the PSC’s website.

As members of the $7K or Strike Campaign (which includes CUNY adjuncts, tenure-track/tenured faculty, HEOs, CLTs, students, and other NYC union members) we are deeply disappointed by the March 21, 2019 letter signed by PSC Principal Officers Barbara Bowen, Andrea Vásquez, Sharon Persinger, and Nivedita Majumdar, which has misinformed our fellow union members about our work.

The letter claims that we are a small group of union members who have intentionally attempted to represent ourselves as union leadership, and who claim that “$7K or Strike” is the union’s official position. None of that is true. $7K or Strike is a movement that reaches out to PSC members, students, and New York City communities to inform them about the need to make the $7K per class demand non-negotiable. We have used a public  conference, multiple campus grade–ins, tabling, office visits, chapter meetings, one-on-one dialogues, picket line solidarity with other NYC unions, and coalition meetings to build solidarity to achieve the robust contract that all PSC members deserve.

During this campaign, we have clearly and respectfully distinguished ourselves from the PSC leadership, in large part because we have a different strategic vision for how to win a solid contract. While the leadership has sought to mobilize the contract struggle from the top down, we believe that only a rank-and-file upsurge of participation – galvanized by the clear $7K or Strike demand – can build a fighting union. Furthermore, during this campaign, we have always set our primary sights on who our real adversaries are: CUNY management and the city and state government, who have all refused to allocate the funds necessary to transform our university.

The Open Letter’s suggestion that PSC members have been confused or alienated by the $7K or Strike campaign is deeply insulting to the hundreds of members across all titles who – knowing full well that $7K or Strike is not yet the official position of the entire union – have signed pledge cards calling on the leadership to hold a strike authorization vote, signed solidarity letters in support of striking to win $7K, and voted for resolutions stating the same. We hope the PSC leadership recognizes that the $7K or Strike Campaign is complementary to its efforts and urge them to seize on the momentum that we have co-created.

Our campaign does this work as much to attain secure, safe, and respected labor practices as to protect the right to quality affordable education for our students who experience tuition increases with no investment in the university system’s infrastructure and staff. Our campaign has generated solidarity from hundreds of students across the CUNY system who have signed a letter supporting the $7K or Strike demand.

Our members have taken active roles in the PSC, leading efforts to increase PSC membership, while attending and voting at PSC Delegate Assemblies, Committee of Adjuncts and Part-Timers meetings, and PSC campaigns, press conferences, and rallies to show that our union must be united to end the rampant exploitation of our adjunct faculty and improve the lives of all of those who work and study at CUNY. We would expect leadership to be overjoyed to see such committed organizers dedicating our free time to building union power.

Resolutions and statements in support of $7K or Strike have passed at ten PSC chapters and counting, at meetings – historically sparsely attended – that have drawn large numbers of newly-activated members. The Open Letter’s accusations are a clear attempt to silence that democratic endorsement. The letter uses the language of “subterfuge” to foment the very kinds of divisions it purports to overcome, and to alienate those of us committed to drawing on, if necessary, the most effective form of direct action available to organized labor movements.

We have called for a PSC Town Hall to discuss and debate the merits of various approaches, which the leadership has refused to host. Meanwhile, the bargaining team in its recent counter-proposal to CUNY management has conceded the clear demand for $7K with no input from the membership.

The groundbreaking teachers’ strikes in Chicago, LA, Oakland, West Virginia, and elsewhere, which won game-changing gains for students, families, and workers alike, took years to build. As rank-and-file union members, we believe that we are overdue to build toward a strike. The bargaining team can’t flip a switch overnight. The Open Letter states we need to wait for leadership’s signal to organize for a strike. They forget that the rank and file can’t afford to wait. If we want to win transformative demands for all job titles and for our students, then we need to prepare and have those conversations now. It is not because we take the risks of a strike lightly that we have undertaken this campaign; it is because we know there is hard work ahead for us to win these entwined gains.

The PSC leadership’s decision to pit the $7K or Strike Campaign – rank-and-file union organizers across titles – against the rest of the union callously disregards our precarious economic situation. It is a cynical attempt to demolish the bridges of solidarity that we members have built.

We invite all PSC members who support the $7K or Strike Campaign to sign pledge cards, sign the solidarity letter, and pass $7K or Strike resolutions in your chapters. We also urge you to attend the April 18 PSC Delegate Assembly wearing red to show our collective impact in transforming this contract campaign. Who speaks for the union? All of us. The rank and file. Let us act together. A diversity of voices strengthens our union.