Puerto Rico has been ravaged by a series of natural disasters since 2017. Though it is a U.S. “territory,” the U.S. government has failed to provide adequate aid or assistance. U.S. colonialism—combined with natural disasters that are frequently the byproduct of capitalist-created climate change—have mired Puerto Rico in a permanent state of disaster. 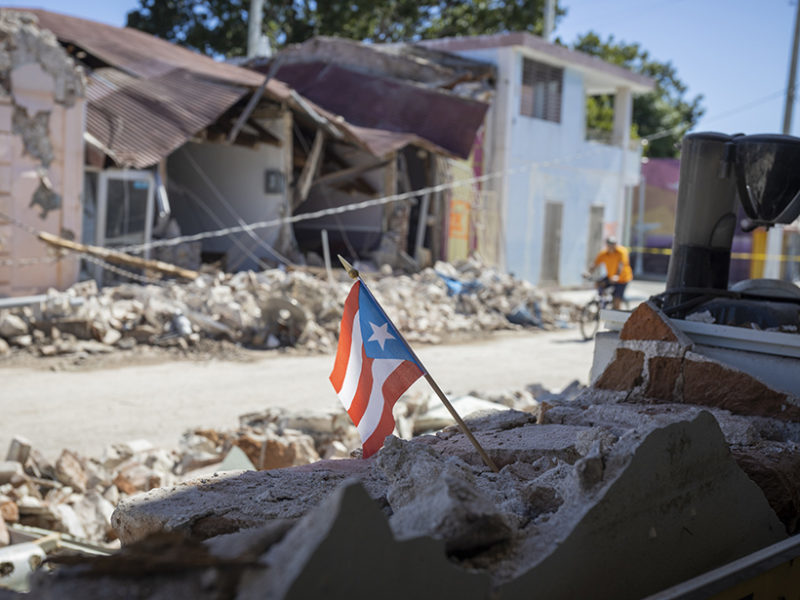 The string of natural disasters that have rocked Puerto Rico since 2017 began with Hurricane Maria, a Category 5 hurricane that caused the deaths of 3,000 people. After the tragedy of the hurricane itself, the island faced countless hardships. The hurricane knocked out power for 1.5 million people on the island; it was not fully restored for 328 days, making it the longest blackout in American history. Children attended school without light, and everyday home appliances like refrigerators became useless, devastating the island’s poorest.

The U.S. response in the face of this catastrophe was sluggish and ineffective. At the time of the disaster, Trump took to Twitter to imply that Puerto Ricans were lazy and “want everything to be done for them.” Even though the island is a United States territory, the tweet made it clear that they are on their own when faced with disaster.

The suffering was exacerbated by the colonial relationship between Puerto Rico and the United States. When FEMA was giving its poorly managed, limited assistance, it denied relief to many applicants who were unable to produce titles to homes. Many of the applicants could not produce titles because they built their homes on land owned by their families or their employers. Many times there would be no official titles created because permission to build a home on a sprawl of land would be made by a “gentleman’s agreement.” People would discuss with their families or their employers who owned land and ask if they could build their homes on top of the land. If the agreement was made, there wouldn’t be official contracts developed—credibility fell on each party’s word. Therefore, many islanders permanently lost  their homes due to lack of evidence of the home’s existence and ownership.

Shelter wasn’t the only basic need that FEMA was unable to provide. There were water and food shortages throughout the island that FEMA showed great reluctance to fix—so much so that many Puerto Ricans of the diaspora and neighborhood groups that had been organizing prior to the hurricane, such as Centro de Apoyo Mutuo, were forced to mobilize in order to make up for FEMAs ineffectiveness.

The response by the United States was so inadequate that Carmen Yulin Cruz (the mayor at the time) commented:

I cannot fathom the thought that the greatest nation in the world cannot figure out logistics for a small island. I am asking the President of the United States to make sure somebody is in charge that is up to the task of saving lives.if we don’t get the food and water into peoples’ hands what we are going to see is something close to a genocide.

Though the island has yet to fully recover from the hurricane they now have been battered by a series of earthquakes that began December 31, 2019. The worst of the earthquakes occurred on January 7, 2020, killing one person and destroying 300 homes. The extensive damage created a state of panic for the people of the island. Many Puerto Ricans are now forced to sleep outside because of the destruction of their homes.

Furthermore, the infrastructure of Puerto Rico was severely damaged, causing water shortages and widespread blackouts for up to 1.5 million people. The situation has abruptly become identical to the post-Maria conditions. Meanwhile, the United States is still withholding approved funds that Puerto Ricans require for Maria relief.

The United States refuses to distribute 18 billion dollars in funds that were to be allocated towards Hurricane Maria relief. The funds were approved by Congress and are supposed to be managed by the Department of Housing and Urban Development (HUD). The specific purpose of the funds is to harden electric grids, repair infrastructure such as bridges, and repair homes.

However, HUD claims that they refuse to allocate the funds out of fear that they may “fall into corruption by Puerto Rican officials.” This inaction is not surprising, but by withholding funds the damage to home and infrastructure will remain a problem for years to come. Furthermore, the island will be subjected to worse disasters, such as stronger hurricanes caused by climate change.

Cruelly mismanaged aid is not the only way the U.S. abuses Puerto Rico. Its long colonial relationship with the United States is a melange of abandonment and economic extraction. The Financial Oversight Board (FCB), colloquially known as “La Junta,” is an American entity that has fiscal control over Puerto Rico. It was imposed by Obama and a Republican Congress and has the power to influence major economic decisions on the island, such as austerity measures directed towards paying off the United States-imposed 124 billion dollar debt.

La Junta has been responsible for forcing the Puerto Rican government to implement massive austerity measures, such as a 75% slash in funding for the University of Puerto Rico, pension cuts for a majority of public sector retirees, and a decrease in the minimum wage to $4.25 for workers 24 years old and younger in order to redirect those funds to paying off the debt. La Junta is benefitting American banks at the expense of the colonized constituency.

Furthermore, though the minimum wage for Puerto Ricans is significantly lower than that of mainlander Americans, they are still forced to pay just as much in taxes as mainlanders. This not only imposes a disproportionate burden on the people of the island, but they are also not beneficiaries of the social programs they pay into. For example, one-third of the island is in desperate need for government food assistance or “food stamps” from the United States. However, spending for food assistance for Puerto Rico is capped in the United States’s budget, as opposed to the SNAP program in the U.S. that will provide for anyone who qualifies. This means that much of the island’s poor are starving and struggling to get assistance, yet the United States does not provide assistance to them at the same rate as they would for mainlanders.

The United States has also cut the budget for the island’s Medicaid program. Instead of the initial 12 billion dollars that was supposed to be allocated over four years, spending has shrunk to 5.7 billion dollars over two years. This gives them less funding over less time, which could create a medical emergency for low income people of the island because there will be less funds to go around; therefore, many people will either have less medical coverage or none at all. This propels an atmosphere of misery and starvation that has been accentuated by the recent disasters—conditions the United States are directly responsible for.

The mix between the severe natural disasters that have consecutively struck Puerto Rico, the utter neglect conducted by the United States, and the exploitation of the island facilitated by the U.S. government and banks has developed a dire situation of despair on the island and elucidates the horrors of colonization. In order for the island of Puerto Rico to be more prepared in the face of natural disasters, major mobilizations led by the island’s working class and poor must demand the immediate end of colonization, an end to the Junta, the eradication of the debt, and self determination for Puerto Ricans.

Taking to the Streets

In the past year, Puerto Ricans have put up a heroic struggle. Over the summer, they ousted Governor Rosselló after damning WhatsApp conversations emerged in which he admitted to corruption and made fun of LGBT people as well as those who desperately needed aid after the hurricane. Due to mass mobilizations, Rosselló was forced to step down. Importantly, the movement wasn’t just demanding the resignation: the full slogan was Ricky Renuncia y llevate la junta- Ricky (Rosselló) resign, and take the junta with you. Now, the struggle against Rosselló’s replacement has been rekindled—and perhaps a greater struggle against the Junta will follow.

Currently, Puerto Ricans have taken to the streets to oust the current governor Wanda Vasquez Garced after a blogger put out a video of undistributed supplies for relief such as water and baby food. The people are showing a great strength and desire for change by demonstrating in front of the Governor’s mansion. Some protesters have gone so far as to carry guillotines as a symbolic gesture demanding the governor to resign. However, fighting immediate political corruption is just the tip of the iceberg for Puerto Rico. Until the island dismantles the Junta and is rid of its massive debt, Puerto Rico’s struggles will continue.

Likewise, Vasquez, like Rosselló are subservient to U.S. capital.The ruling class of the United States paints a false picture of benevolence of its relationship with Puerto Rico, but the truth has made itself abundantly clear: the United States oppresses and exploits Puerto Rico, as is inevitable with the monster of colonialism. The Puerto Rican people have the right to decide about statehood and independence, they have the right to self determination. The Puerto Rican working class must shake off the political and economic chains of U.S. imperialism—and those of us who live on the mainland must fight here for the same goal.