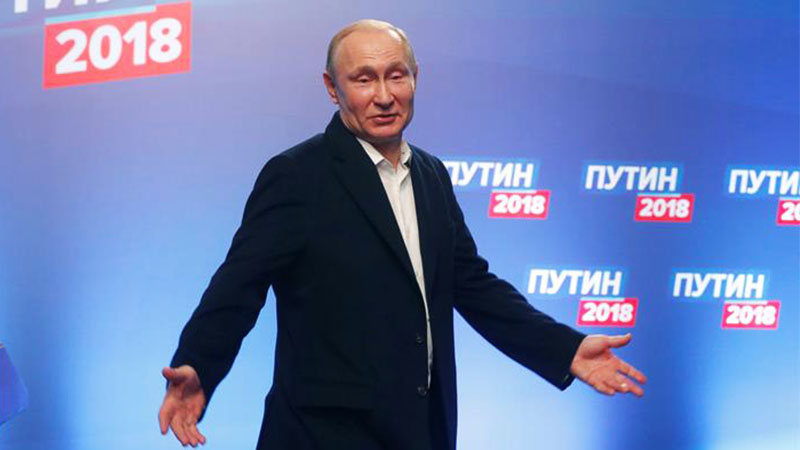 Putin won the presidential elections in Russia handily last Sunday, with 76.67 percent of the votes cast after 99.81 percent of the ballots had been counted, with a turnout of 67.47 percent. However, the voting took place amid widespread claims of voter fraud and after weeks of a massive get-out-the-vote campaign launched by the government that led to reports of state workers and students being pressured to vote or herded to the polls. “Students, the military, teachers and other state employees have carried out the so-called elections one more time!” says activist Andrei, who was an observer of the elections in St. Petersburg.” The feeling during these elections is a mix of disgust, fear and despair.” By 7 p.m. Moscow time last Sunday, Golos, an independent monitoring group, reported 2,400 irregularities, including ballot stuffing, harassment and violence against observers, and incidents of election officials inflating ballot numbers.

Given the country’s economic stagnation and increased protests on the home front as well as rising tensions abroad — most recently in relation to the alleged poisoning of former agent Sergei Skripal and his daughter last March 4 in England — the government had been putting pressure on local officials to achieve a turnout of at least 70 percent, in order to show that Putin has a legitimate mandate. Voter turnout was a particularly important issue this year after a historically low turnout in the parliamentary elections of 2016. In addition, Russia’s most prominent opposition leader, Alexei Navalny, who was barred from the race due to a past criminal conviction on what were widely seen as fabricated charges, had called his supporters to boycott the elections.

The cities’ streets were thus plastered with ads urging electors to head to the polls and administrative resources around the country were widely used to fund the campaign effort. The Central Electoral Commission received hundreds of complaints regarding the inappropriate use of such resources. Widespread reports were also received by monitoring groups like Golos from civil servants, students and private company employees in relation to compulsory voting and pressures to participate in the elections. Workers of Mosgortrans, a state-owned transportation company that employs more than 30,000 people, complained to the CEC that they were being forced to visit the polling stations. Employees of the Progress Rocket Space Centre stated that an order had been distributed by the heads of departments indicating that all those who do participate in the elections on March 18, 2018 will be dismissed and blacklisted. In other cases, incentives were provided for private employees and university students to head the polls, which included raffle prizes and awards for the best selfies taken at polling stations, such as iPhone Xs, cars and tickets to festivals organized to mark the anniversary of the Crimean annexation.

Opposition leaders like Navalny also denounced the use of a new voter registration system allowing voters to register in precincts other than their districts of residence. In practice, this apparently allowed voters to register in more than one precinct, without any reliable measures put in place to prevent multiple voting by a single elector. According to Navalny, this would lead to numerous cases of “carousel voting,” in which groups of voters are bussed around to vote multiple times.

In the weeks leading up to the elections, several incidents were reported of police raiding opposition headquarters, seeking documents that allow observers to visit polling stations. On election day itself, both Golos and observers of rival parties reported dozens of cases in which monitors were prevented from moving around the polling stations, harassed by police or even barred from entering the polling station. In Dagestan, police officers tried to arrest election observer Marat Ismailov for complaining against ballot stuffing, after which he was physically assaulted by a group of men. He stated that while this was going on, the polling station workers cranked up turnout from 30 percent to 55 percent. At Polling Station No. 1,126 in Makhachkala, security cameras showed a mob of young men entering the polling station and then violently dragging monitors out of sight of a ballot box after they had flagged several violations, including repeated ballot-stuffing.

In five regions or republics, including Crimea, where voters participated for the first time in Russian presidential elections after the annexation, Putin received more than 90 percent of the votes. He also received 70 percent of the vote in Moscow and St. Petersburg, where opposition to the government is traditionally strong.

Unsurprisingly, the opposition candidates, most of who are not seen as truly legitimate challengers, lagged behind Putin by a considerable margin. The second-most voted candidate was millionaire Pavel Grundinin, for the Communist Party, who garnered 11.79 percent of the vote, followed by ultranationalist Vladimir Zhirinovski, with 5.66 percent of the vote. Journalist Ksenia Sobchak, the third woman to ever participate in Russia’s presidential elections, received 1.67 percent of the vote, while historical liberal leader Grigori Yavlinkski gained the support of 1.04 percent of the voters.

After his victory, Putin proclaimed: “Our great national team has won” and “Everyone who voted today is part of our big, national team.” However, the political charade that were these elections can hardly conceal the fact that he won in the face of increasing mass protests clamoring for a “Russia without Putin.” Since 2011, when protesters took to the streets in massive numbers to protest election fraud, the government has grappled with increased opposition among the population. In the face of this growing unrest, Putin has intensified a crackdown against protesters and the Left, which has led to a series of arrests on fabricated charges and even to the torture of anarchists and anti-fascists in Penza and Nizhny Novgorod. The government has also stepped up efforts in recent years to promote conservative values among the population against “Western values,” while fuelling political tensions abroad with the annexation of Crimea and its military intervention in Syria. Nevertheless, in the context of the country’s economic decline and growing income inequality, there are clear and ever-increasing signs that the “Crimea effect” is gradually eroding and that the population’s patience is wearing thin.