QAnon: A Product of Capitalism in Decline

Despite a crackdown by social media companies, the prophecies of Q are still winning adherents. This conspiracy theory says Trump is saving children from a cabal of Satan-worshipping pedophiles. It has its roots in centuries-old antisemitic tropes. But its popularity is an expression of capitalist decline. 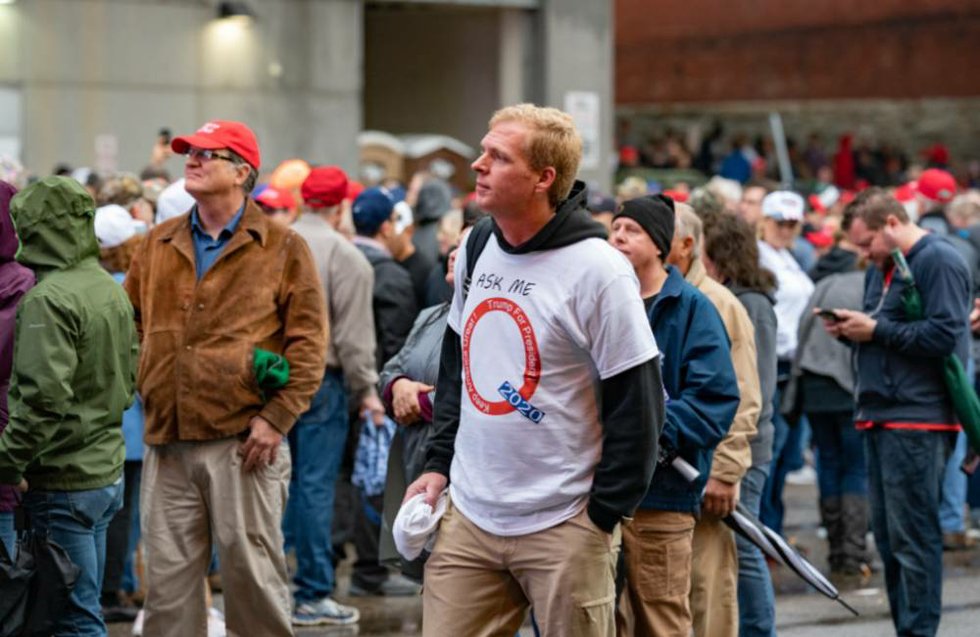 But it’s not just about Trump being smart. As one follower of Q explained: “UNICEF takes children and brings them to the elites.” The reporter then asked what the elites do with children. “Eat them,” the bald man says. “Torture them. Drink their blood after torturing them. Have children fight against each other, and the loser is eaten.” Looking rather perplexed, he asks: “Why don’t you know about this?” Indeed! It seems like a hard-to-miss story.

This might sound like a joke, but QAnon is deadly. The Nazi terrorist who murdered nine people in the German city of Hanau one year ago was also talking about underground military bunkers in the United States where children are tortured. If you convince yourself that you are up against a vast conspiracy that harvests adrenochrome from living children, then just any act of violence seems justified.

The QAnon theory is based on Q, a poster on the anonymous discussion board 4chan (later 8chan, later 8kun), a cesspool that served as the petri dish for the alt-right to grow. This supposed government insider (with “Q” clearance) drops information about a cabal of Satan-worshipping pedophiles who control governments and media around the globe. To you or me, Trump might seem like a bungling fool who has been unable to to implement many of his promises. But this is all a clever façade, Q assures readers, in preparation for a coordinated strike against the cabal — “the Storm” or “the Great Awakening.”

As one podcast has explained very thoroughly, Q is not a high-level government employee, but almost certainly a man named Jim Watkins, or at least someone close to him. This is confirmed by Frederick Brennan, who set up 8chan together with Watkins. Q is not even particularly good at lying — he just seems to have found an incomprehensibly gullible audience.

A whole series of predictions, such as the arrest of Hillary Clinton on November 3, 2017, have failed to come true — and yet, as is often the case when prophecies fail, this does not seem to dampen the faith of Q’s followers. In fact, even moves by social media companies to shut down QAnon groups are seen by true believers as proof that “the Storm” is approaching. Q has grown into an omni-conspiracy, encompassing ideas from flat earth to lizard people to more traditional Christian messianism.

Why, in a time when all the knowledge of the ages is available to anyone at the click of a button, are so many people ready to believe such absurd and disturbing nonsense?

QAnon is based on very old — and no less absurd — conspiracy theories. Right-wingers today will rail against “globalists” secretly controlling the world. This is nothing more than a slightly updated theory about a Jewish world conspiracy, as shown by the fact that the most dangerous “globalists” are inevitably Jewish, including George Soros, Janet Yellen, and Lloyd Blankenfein. In a nod to inclusivity, however, modern conspiracy theorists have recently started hating Bill Gates, too. The idea that these elites are drinking the blood of children is the blood libel directed against Jews for hundreds of years in Europe.

This kind of conservative mass psychosis has happened more recently too. In the Satanic Panic of the 1980s, millions of Americans became convinced that a secret army of Satanists was kidnapping and torturing children. The complete lack of evidence, even though thousands of children were coerced into making the most fantastical accusations, was just seen as proof of the conspiracy’s power. It might be easy to think of this as a few dumb suburbanites, but the Panic lasted for years and spread around the world. Dozens of people were sent to prison!

A similar moral panic is going on right now around human trafficking. An advertisement presented by a non-profit affiliated with U.S. airlines claims that “68,000 people are trafficked right in front of our eyes” every single day — a totally made-up number. Human trafficking is a real problem, with people around the planet subject to different forms of forced labor. But credulous or cynical NGOs take numbers aboutof people in forced marriages (another form of human trafficking, and horrible enough) and then use them to claim that millions of children are being kidnapped and sold into slavery. QAnon, as bizarre as it sounds, is not actually adding much to this widespread theory — it’s simply claiming that the secret society kidnapping children is headed by the Clintons.

But that doesn’t explain why such ideas are getting traction right now. The Satanic Panic was at least partially a result of disruptions to traditional family roles. Mothers were beginning to work outside the home and sending their children to daycare centres — fears of modernity led to this pseudo-medieval backlash. In a similar way, QAnon reflects a much deeper uncertainty about a world marked by pandemic, economic meltdown, and a climate apocalypse on the horizon.

During the crisis, millions of people have been thrown into poverty, while billionaires have seen their wealth surge. How can that be possible in a system where the people control political power, i.e. a democracy? Clearly something is very, very wrong.

Corporations get millions of unsuspecting people addicted to powerful drugs, and manipulate the science about how our planet’s climate is changing, all in their eternal quest for profit. At every step, such evil plans are protected by corrupt government officials. Surely a conspiracy is at work!

From my perspective as a communist, there is in fact a tiny cabal of people controlling the world. There is a conspiracy of sorts — it’s just not hidden at all. You can open any newspaper and read about the small number of people who control the world’s wealth. They don’t have secret handshakes or religious rituals. No internet sleuthing is required — beyond easily accessible lists from Forbes or other publications. The big conspiracy that QAnon is seeking is the capitalist class.

This is the big contradiction of modern society: we are told that we live in a democracy where all people are equal, but we are constantly presented with evidence that the capitalist class controls everything. The solution to this contradiction is socialism: expropriating the capitalists and putting society’s wealth under the democratic control of everyone. But because we are subject to so much propaganda against such a strikingly simple solution, things like QAnon rise as “the socialism of fools,” in the words of August Bebel.

QAnon claims to be directed against elites. But it only attacks one section of the ruling class (Soros, Gates) in order to support another (Trump, Musk). In a sense, the idea of a shadowy cabal controlling every aspect of our lives sounds terrifying. But global capitalism is leading us toward crises that threaten the very existence of humanity, and cannot be solved without profound changes to human society. Rather than pondering how to overcome capitalism, it’s actually kind of soothing to imagine that just a few evil figures, rather than an entire system, are responsible for the dangers.

The system we live in, as it spins toward collapse, will keep generating even more bizarre ideologies — especially among the petty bourgeois who see themselves as the backbone of this system. QAnon is hard to fathom, but it will be replaced before long by even more unhinged ideas. The only way to stop that is to fight for a different system — one that is based on rational, democratic planning of the economy. But as Bertolt Brecht put it: it’s “the simple thing that’s hard to do.”