Over 400 Brazilians came together to create “Quilombo Vermelho”– a Black Revolutionary Marxist group. 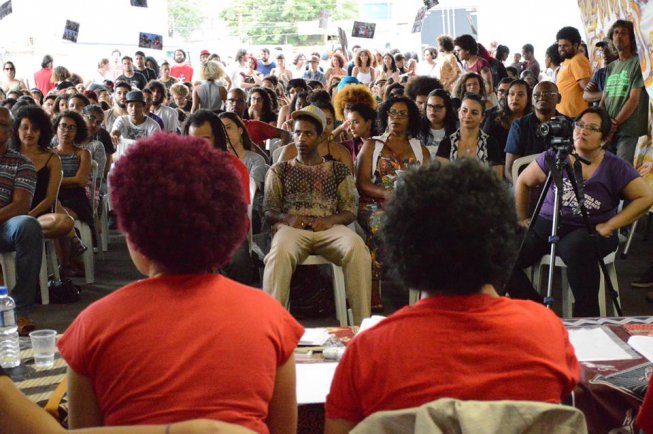 Hundreds of Black workers and young people from Rio de Janeiro, Minas Gerais, Rio Grande do Sul, and other Brazilian areas gathered in the city of São Paulo to launch the Black anti-capitalist revolutionary group Quilombo Vermelho (Red Quilombo). Based on the idea that the liberation of Black people can only happen if capitalism is demolished, Quilombo Vermelho organizes on an anti-racist, anti-police and anti-capitalist platform.

What is a Quilombo?

After Portuguese colonization of Brazil in the 16th century, the Portuguese brought massive numbers of slaves to Brazil, significantly more than were brought to the U.S.. Over 5 million were brought to Brazil to work on massive plantations that enriched Portugal’s economy. Although Brazil won independence from Portugal in 1825, slavery did not end until 1888.

Escaped slaves, in groups numbering anywhere from a few hundred to several thousand, created settlements called Quilombos. The most famous Quilombo was Palmares, located in present-day Alagoas in the Northeast of Brazil, which was created in the early 17th century. The settlement had a population of about 20,000 escaped slaves, posing a threat to Brazil’s slave economy. Palmares produced a wide array of crops (as opposed to the rest of Brazil’s monocrop economy), allowing it to engage in lucrative trade with surrounding towns. This led to purchases of guns and other weaponry that enabled armed raids on plantations, freeing slaves who were brought back to Palmares. Zumbi, the most famous leader of Palmares, waged an almost incessant war against Portuguese slave owners, organizing expeditions to fight plantation owners. The Portuguese sent their most skilled military leaders and hundreds of soldiers on several expeditions until Zumbi was murdered, and Palmares was captured. Quilombos are remembered as bastions of Black resistance against slavery — a history eradicated by the books.

Today, there is a famous chant in Brazil’s Black movement that declares, “Por menos que contém a história. Não te esqueço meu povo. Se palmares não vive mais, faremos palmares de novo.” (“At least remember our history. Our people have not forgotten you. If Palmares does not exist anymore, we will make a new Palmares.”)

In this spirit, Quilombo Vermelho (Red Quilombo) was formed to put forth a politics that is anti-racist, anti-capitalist and for Black struggle. In Brazil, once the world’s largest slave destination, the working class is overwhelmingly Black– an inherited legacy of slavery. In this sense, organizing the majority of Black people means organizing the working class. Quilombo Vermelho aims to organize against the cuts and austerity measures of the right wing government, as well as against the murderous police and institutional racism.

The Creation of Quilombo Vermelho

The event in Sao Paulo featured speakers from the Movimento Revolucionario de Trabalhadores (Revolutionary Workers Movement). Speakers included Carolina Cacau, former candidate of the Party of Socialism and Liberty (PSOL) in Rio de Janeiro; Lourival Aguiar, a subway worker who was fired for political reasons; Vilma Maria, a cafeteria worker at the University; and Jennifer Tristan, from the Marxist feminist group Pão e Rosas (Bread and Roses) and youth group Faisca (Spark). They all spoke on the topic of Black people organizing the struggle against capitalism and racism.

Marcelo Pablito, leader of the Movimento de Trabalhadores Socialistas (MRT, Movement of Socialist Workers) and member of the Black Caucus at USP (University of Sao Paulo) Student Union, highlighted the subversive and revolutionary tradition of the struggle of Black people in Brazil and throughout the world against slavery. The bourgeoisie was borne out of, and obtained its wealth by, trafficking and exploiting Black people while using racism as an ideological explanation for this system. Slavery is what founded the modern form of capitalism, and the bourgeoisie keeps racism alive in order to maintain a system of hyper-exploitation of Black people and the division of the working class.

This does not mean that the creators of Quilombo Vermelho believe that there can be equality within the capitalist system. Pablito stated, “We cannot win equality with whites within capitalism, which is founded on inequality and designed to secure the profits of the bourgeoisie. What the capitalists want is to keep Black people in their place, which is in precarious work in prison and in graves. We want to get out of this system and fight against racism and against capitalism, white and Black workers together. We want to put forth campaigns for equal pay for Black and white women and the organizing of subcontracted workers, and we want to build a material force that will arm every Black person to fight against racism and capitalism. We are proud of our culture: every dreadlock, every curl, every samba circle, every capoeira circle. In every workplace and place of study we want to create a seed of this movement: a Red Quilombo.”

Today, Brazil is governed by a right wing President who came to power via an institutional coup that ousted the democratically-elected Workers Party President, Dilma Rousseff. This right wing government was brought to power by the white Brazilian bourgeoisie, whose wealth can overwhelmingly be traced back to the slave trade and is maintained via institutional racism, the reason that Black people are in hyper-exploitive jobs. This is why Quilombo Vermelho seeks to fight against those who make mass profits from the racist, capitalist system and see the struggle against capitalism as central to the struggle against racism.

Cacau, a public school teacher, argued that is it not possible to face racism in Brazil without fighting the right wing independently of the Workers Party. Both the Workers Party and the right wing are allies with landlords and entrepreneurs, and despite some minimal income redistribution, it was during the Workers Party governments that billions were given to bankers and other white capitalists and subcontracting positions jumped from 4 million to 12 million. An overwhelming number of subcontracted workers are Black, specifically Black women. “To combat the right we can not be satisfied with the minimum, as the Workers Party wants us to be. We cannot naturalize the division of workers into sub contracted and contracted, Black and white. We instead need to build an anti-capitalist program, a revolutionary program; Black and white people, women and men against capitalism and racism,” said the young leader of the MRT.

Despite right wing attacks, Black people are fighting back. Over the past few years, a huge student movement has swept Brazil with high school and university occupations around the country, and Black students have been at the forefront of these struggles. Pablito explains: “The revolutionary Black Trotskyist C.L.R. James said, ‘The only place where Negroes did not revolt is in the pages of capitalist historians.’ Some of the texts that erase the history of Black people were written at the University of Sao Paulo. We are proud of the students who rise up within the University, who speak about the erasure of our culture, and who speak out against the system of subcontracting that affects both Black and white workers. We are proud that in attendance are young people from the University of Sao Paulo and the University of Campinas — two of the largest universities in Sao Paulo — who have mobilized fellow students and achieved racial quotas at their universities [that ensure a more racially diverse student enrollment]. These are some of the most racist universities in the country and these young people took them on.”

Thiagão, an MRT militant in São Paulo’s ABC Region, highlighted the economic crisis in the region. With hundreds of thousands of unemployed people and terrible housing conditions, particularly in the favelas, people are fighting back. Thiagão said that it is necessary to build a Red Quilombo because “The hunger of our children can not be [the capitalists’] wealth. We need to say ‘enough.’ It is time to follow the example of the Black people of Haiti, Luiza Mahin, Zumbi, Dandara.”

Brazil is oppressed by colonial powers, particularly by the United States, which seeks to profit off of Brazilian oil and held trainings for the judges who orchestrated the institutional coup. Black Brazilians, particularly Black Brazilian women, are viewed and marketed as sexual objects for foreign tourists, pushing Brazil’s poorest women into prostitution and creating a huge human trafficking market.

Against Racism, Against Sexism

The event also included an emotional speech by Vilma Maria, a university cafeteria worker who migrated to Sao Paulo from the impoverished Northeast of Brazil. She emphasized the need for Quilombo Vermelho to continue the campaigns initiated by the Marxist women’s group Pan y Rosas who organize for an end to subcontracting and for equal wages for pay equity.

Jennifer Tristán of Pão e Rosas also highlighted Brazilian racism and sexism; in Brazil, Black women earn 60 percent less than white men. She also emphasized the need to organize against PEC 181, a bill which would make all abortion a crime, even in the case of rape or if a woman’s life is threatened by the pregnancy. This reactionary project affects all women, but especially affects Black women, who are most likely to die in illegal and unsafe abortions.

American revolutionary and Black activist Julia Wallace of Left Voice, part of the international network of news sites, sent greetings and discussed the need for a revolutionary strategy to fight against capitalism and racism.

Diana Assunção, leader of the MRT and former candidate for the PSOL in São Paulo, greeted the attendees. Diana expressed the Marxist position that the struggle for the emancipation of white workers is intertwined with the struggle for the emancipation of Black people. She argued for the need of a revolutionary party to defeat the capitalists, the descendants of slave owners and said “To combat capitalism and racism, we need a revolutionary party of Black and white people, men and women.”