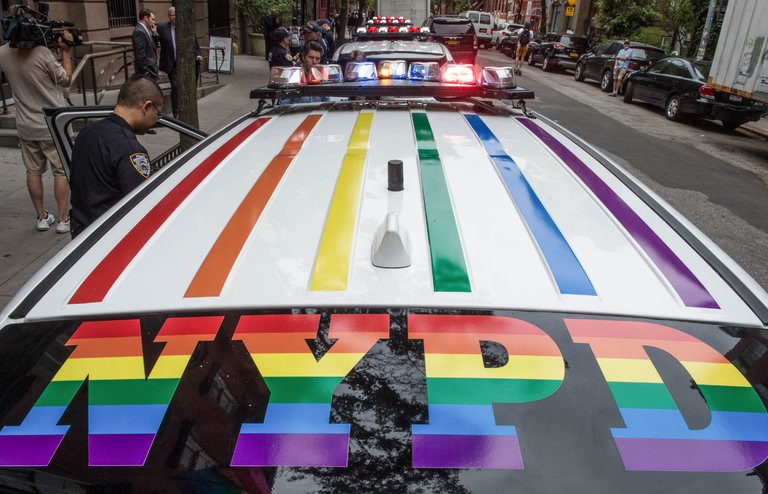 This week, the world saw Philando Castile’s murder — complete with footage of him following every order the police officer issued — clearly documented on a dashcam video. We watched his girlfriend Diamond Reynolds deferentially responded to the murderous cop who killed her boyfriend, continuing to call him “Sir”. We watched the video of Castile’s daughter comforting her mother.

“Mom, please stop cussing and screaming ’cause I don’t want you to get shooted,”

We also learned of pregnant Black woman Charleena Lyles, murdered by the police in front of her children. Castile’s murderer was found not guilty, and is unlikely that Lyle’s murderer will face any real consequences.

This is also Pride Weekend in New York City — beginning with a trans rights march on Friday, the dyke march on Saturday, and the massive pride parade on Sunday. Recognition of National Pride Month is visible all over New York. At Target, there is a special section of rainbow clothes, and several retailers have pride messages on billboards. Googling an LGBT-related search term results in a rainbow-decorated results page. Even the police have joined in the festivities by debuting the NYPD NYC Pride Mobile.

The 2017 NYPD NYC Pride Mobile just debuted. 👮🏳️‍🌈👮🏻‍♀️
Thank you to everyone in the NYPD for your service!

Along the parade route the police will be unlikely to exercise their brutality openly (unless one tries to bring the question of police violence to the parade, as protesters did in Columbus, Ohio). Along the parade route, the cops will don rainbows and act like they keep us safe. But we know that this is the same police force that kills Black people with impunity– the police force who killed Eric Garner and Sean Bell and Kimani Grey and countless others. The police force that locks up and harasses Black and Brown people and working class people– especially those who are gender non conforming, wants to portray themselves as gay-friendly for the Pride parade. The members of the same oppressive and murderous institution that forced a little girl to find the strength to comfort her mother immediately after seeing them kill her father — they now want to paint rainbows on their cars and present themselves as friends of the oppressed.

As LGBT people, we know that cops have always been and continue to be the enemy of the vast majority of us, especially Black and trans LGBT people. We must build an LGBT movement that clearly states: “No cops at our Pride. There is no place for you here.”

Cops: Historically, Our Most Dangerous Enemy

Throughout most of the 20th century, being LGBT was against the law. Many states had rules calling for the arrest of any person wearing less than three items specific to their assigned gender. In LA, breaking this law meant a $500 fine or 6 months in jail. Sometimes those arrested had their names published in the newspaper.

Those who were sent to enforce these homophobic and transphobic laws were the police, who regularly raided LGBT venues, engaging in mass arrests. These bars, like the Stonewall Inn, were some of the only places where LGBT people could meet to openly express their genders and sexualities, to build community, and to find sexual partners, connection, and affection. Yet these bars, far from being safe spaces, were the targets of tremendous violence. LGBT people were beaten and even raped by the police. One particularly famous example is of Howard Efland , a gay Black man who was beaten to death by the LAPD. His murder was ruled an “excusable homicide.”

Police violence against LGBT people is not a thing of the past by any stretch of the imagination. A 2013 report showed that 48% of all LGBT violence survivors who interacted with police experienced police misconduct. The situation is much worse for trans people. A 2012 report of trans Latinas in LA showed that two thirds reported that they had been harassed by the police, 21% said they had been physically assaulted, and 24% said they were sexually assaulted. Violence is not only perpetrated by the police, however; 2016 was one of the deadliest years yet for trans women in the US with 22 murder victims, and 2017 has already seen 13 murders of trans women. Those trans women murdered are overwhelmingly Black. Trans women who fight back against violence are often imprisoned as in the famous case of Cece McDonald who served prison time for defending herself against a transphobic attack.

According to a study by the Center for American Progress: “LGBT people face higher incarceration rates than the general population.”. In addition, 7% of teens identify as LGBT, but this number rises to 20% when surveying those in juvenile detention centers. The violence of incarceration is compounded for trans people as they are imprisoned in a population that is not of their gender. Trans women in particular face high rates of sexual violence in men’s prisons, both from inmates and from prison guards.

Why there are rainbows on cop cars?

The extraordinary ability of the capitalist system to co-opt and integrate the struggles of the oppressed in the quest for profit is demonstrated by past 50 years of history of gay rights. It was only 14 years ago that “sodomy” was illegal in 14 states, only 50 years ago that LGBT people had their names published in newspapers, and only 48 years since the Stonewall uprising. Today, much of corporate America seeks to capitalize on Pride with advertisements and parade floats. For some people, this is a sign of our emancipation — the right to be the object of marketing and the right to be considered a desirable consumer is a measure of our equality. Not only is the LGBT community a new open market for capitalism, more and more often, openly LGBT people are tapped for the highest level of government jobs in the US. During his two terms, Obama appointed 300 people to the highest posts in the country.

These are all signs of an increase in LGBT rights, a cause for which LGBT people have fought and, from that fight, achieved significant victories, like obtaining the right to marry, the right to adopt children, etc. The problem, of course, is that achieving these rights will not help us achieve real equality at all — what kind of equality can possibly exist in a society based on class-based oppression or in a country founded upon slavery that continues to reap tremendous profits off the prison industrial complex, racial divisions in the working class, and maintaining racist stereotypes? The problem is that just because oppressed people have rights in law does not mean that the system respects our lives. In fact, often the system provides oppressed people with formal equality (in law) in order to justify inequality; formal equality becomes a mechanism to justify the fact that we live in a society where most people struggle to make it while a small minority makes billions off of our misery. The rainbow police protect exactly this kind of society– a society of “rights” that can only be enjoyed by a small group of people, while the rest of us– poor, LGBT people, people color continue to suffer daily violence.

The more rights we win, the more it becomes clear that, for most LGBT people, we are not oppressed simply due to our sexual orientation, gender identity, or gender presentation, but are exploited as workers and oppressed as women, people of color, and people with disabilities as well as in a multitude of other ways. In this sense, as wealthy gay and lesbian white people in particular become “normalized” and desireable consumers, police violence continues to other members of the LGBT community.

Organizing in the Spirit of Stonewall

At the Stonewall Inn on June 28, 1969, LGBT people led by trans women of color faced off against the police and sent a clear message that they had taken enough abuse and enough violence and were unwilling to let it continue. The riot lasted days as LGBT people, alongside homeless teens and members of the left, trusted in their own strength to beat back the police. Today, we need that spirit more than ever, as hate crimes against us are on the rise, trans kids are banned from using the bathroom that corresponds to their gender, and police continue to murder with impunity.

Although there are some openly gay and lesbian people in the ranks of the wealthy, and although we are now marketed to by the capitalist class, the police continue to play the same murderous role, with or without rainbows painted on their cars. The murder of Philando Castile shows their true colors. We must organize against the cops who defend the status quo with their tasers, their guns, and their prisons.

LGBT people know the role of the police from personal experience as well as from our history. That is why we must stand up against any attempt on the part of the cops to align themselves with support for LGBT rights and why the LGBT movement must put itself firmly on the side of Philando Castile, standing against his killer. We must be firmly on the side of those who organized a moment of silence at the Columbus, Ohio Pride Parade, not the cops who arrested them, or the gay and lesbian people who supported the cops.

Pride in being a lesbian is something I had to fight for– against my family, my church, my school who only taught me shame. Pride is a tool of the oppressed to reclaim our humanity and acknowledge our personal struggle and the historic struggle of those who came before us. I am proud of Stonewall, and I am proud that our movement arose from a riot. As LGBT people, we should reserve deep disgust for the cops and the system they defend. We should be disgusted and appalled that our enemies have rainbows painted on their cars. It is high time to organize with the spirit of Stonewall– a movement that knows we cannot buy our way to freedom and that cops are our enemy. A movement of the working class and oppressed united against capitalism and oppression.