In the closing speech of the international May Day rally of the Trotskyist Fraction, Raúl Godoy — a ceramics worker and leader of the Party of Socialist Workers (PTS) in Argentina — speaks about the need for workers to form their own independent, internationalist organizations to fight against capitalism. 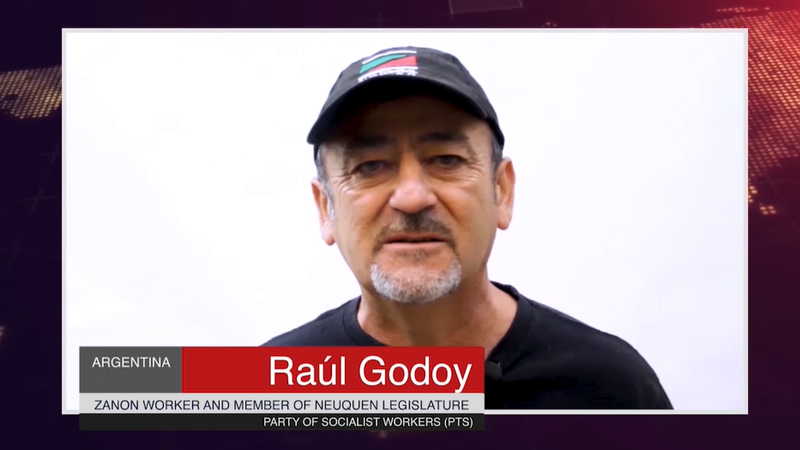 Raúl Godoy of the Party of Socialist Workers (PTS) in Argentina gave the rally’s closing speech. Godoy is a leader in the PTS and works in a ceramics factory that was occupied by workers and began producing under workers’ control in 2001.

Greetings, comrades, to everyone who is participating in this important May Day rally.

The world is brutally affected by a new scourge, a pandemic that is the predictable result of an irrational system whose relationship with nature is increasingly aggressive. Imperialist capitalism is devastating, polluting, and criminal. It systematically destroys our environment with lethal phenomena like climate change and global warming. When capitalism’s foundations began to crack again, it spawned a virus that none of the imperialist powers wanted to take note of, exposing millions of people to disease and death.

But the coronavirus pandemic did not appear in “peaceful” times. It broke out in the middle of a crisis that has been dragging the capitalist system down since 2008. This crisis has challenged both neoliberal governments and those that claimed to be progressive, all of which applied the same austerity plans in recent years.

This has given rise to all kinds of phenomena, such as right-wing projects that seek to channel anger into reactionary and obscurantist nationalism, like Trump and Bolsonaro. There have also been uprisings by the youth and the working class against the governments of several countries.

But against the defenders of big capital, in Argentina and around the world, we shout: our lives are worth more than your profits!

We do not for a minute forget the massacres in the Middle East and Palestine, or the thousands of families whose children drowned in the sea while trying to reach the coasts of Europe to flee  hunger and war. This was before the pandemic.

We do not forget the austerity plans of governments around the world that have made the livelihoods of millions of workers precarious.

We do not forget for a minute the big capitalists, like Paolo Rocca here in Argentina, who have been multiplying their wealth to no end, almost always with state subsidies. These are the same people who scream bloody murder when we talk about a tax on large fortunes!

Before the pandemic, the richest 1% of the world controlled an obscene 82% of global wealth.

No, this pandemic did not fall from the sky. Cruelly, it lays bare all the contradictions of imperialist capitalism in decay.

As has been said here, successive governments — both neoliberal ones and those that call themselves progressive — have systematically destroyed the entire healthcare system across the world, even in the great powers. Right-wingers like Trump and Bolsonaro make things worse, as we see today with their disastrous management of the pandemic.  Health, which is a universal right, was transformed into a mere commodity. Private laboratories and clinics profit from the health and lives of millions of people. The sectors who are hit the hardest are, as always, working-class families.

In the face of the pandemic, we have seen that social distancing — the only measure coordinated by all states — was and is not enough. None of the partial measures that have been taken are enough.

That is why we say: Enough speculation with the health and lives of millions!

We demand the centralization of public and private health care and social welfare in order to put all healthcare resources at the disposal of a comprehensive health plan that will serve the entire population.

We demand massive testing to know how the pandemic is actually developing.

We demand paid leave in all non-essential factories and workplaces.

We demand quarantine wages for everyone without income, as well as health and safety commissions in every workplace.

We condemn the pact that the union bureaucracy of the CGT in Argentina has signed with the Argentine Industrial Union, accepting wage cuts for furloughed workers — when the state is covering half the salaries!

We say: No layoffs! No wage cuts!

Under the Argentine government of Alberto Fernández with Kirchnerism and all of Peronism, the banks continue to make fabulous profits, while hunger and unemployment increase.

Today we are holding this virtual rally with friends and comrades from 14 countries, with whom we publish an international network of revolutionary online newspapers. It is an indispensable tool by which we can reach millions of people with our ideas and our program, presenting each of our struggles.

We were preparing to participate in a Latin American Conference called by the four parties of the Workers Left Front — Unity (FIT-U) in Argentina. It would have taken place right now, but everything changed with the pandemic. The conference was postponed, but by no means has it been cancelled. We were going to hold the conference in the heat of the struggles in Chile, in Ecuador, against the coup in Bolivia.

Now our countries are in quarantine. They have imposed an idea of national unity against the pandemic. The governments have managed to legitimize, for the moment, the repressive forces in the streets.

Even so, the resistance has already begun. When the worst of these times are over, the social misery and economic disarray will emerge. The class struggle will be reborn in a much more powerful form.

That is why it is important to defend the political independence of the workers. We need a program to make the capitalists pay for the crisis, relying on the class struggle to implement it. Those of us who have had seats in parliament for the Workers Left Front, such as my comrades Myriam Bregman and Nicolás del Caño and many other comrades in this country, will be at the service of this struggle. These commitments are expressed by the invitation to the Latin American Conference. They are the identity of the Workers Left Front — Unity. As members of the Trotskyist Fraction, we stand firm on the basis of these agreements, in the front lines of the class struggle.

Like my comrade Tracy, who in the very heart of the United States spoke out about the concerns of thousands of healthcare workers and is an editor for Left Voice.

Or our comrades from Révolution Permanente in the New Anticapitalist Party in France, activists of the heroic strike by transport workers and Yellow Vests, such as my comrades Gaetan, Anasse, and all the other militants.

Like our comrades in the Spanish State, Germany, and Italy.

And our comrades of the Revolutionary Workers Party (PTR) in Chile, confronting the criminal regime of Piñera, putting their bodies in the streets. I was proud to stand alongside them in long days of struggle and comradeship.

Like our comrades in Bolivia, confronting the ecclesiastical, civil, and military coup of the reactionary Right.

And our siblings in Mexico, Brazil, Venezuela, Costa Rica, and Uruguay.

I would like to send greetings to the members and sympathizers of the Party of Socialist Workers (PTS) in Argentina who are watching right now, as well as  our comrades from affiliated groups who struggle alongside us, and our comrades who work in health care and aeronautics in the front line of struggle. And also to the precarious youth, who are entering the struggle, and to our comrades of the socialist feminist organization Pan y Rosas (Bread and Roses) who are fighting around the world for women’s rights.

I send my best also to my comrades at the occupied factories of Textil Neuquén and Madygraf, who have converted their factories to produce equipment for fighting the pandemic. To my comrades at the occupied factories Zanon and Gestiones Obreras Ceramistas. They are proof of the potential of the working class. If the decisions at big factories were made by workers, these examples could be generalized. This would mean shifting to essential production in order to make respirators, build hospitals, distribute food, and do everything else to fight the pandemic, at the service of the needs of the vast majority.

From these occupied factories, where we have resisted for years, part of the difficult task of surviving in a capitalist world, we again take up the battle cry: open the accounting books of all industries! Occupy every factory that closes or does massive layoffs, and begin production under workers’ management!

Today, the crisis of the healthcare system shows categorically that doctors, nurses, and all other personnel are the ones who can exercise real control of the administration of a unified health care system — that makes decisions in consultation with specialists, but does not leave decisions in the hands of governments that answer to the interests of the private laboratories and healthcare companies.

Our partial struggles so far have been a great school for all of us.

Our theoretical and political accumulation, the development of our network of newspapers, the programmatic, tactical, electoral, and practical agreements that we have reached with different tendencies throughout the years are an important step, but we know they are not sufficient.

Our most important task is to call on new generations of young people, of women, of workers to embrace revolutionary ideas, to take all the tools that have been developed and to go for more.

The invitation that we want to extend at this rally, to the thousands who have logged in from different parts of the world, is that they join us in building this revolutionary international party of the working class — an organization of insurrectionary slaves that organizes the necessary forces to face the sufferings and hardships to which all capitalists want us to submit.

Our international tendency is also attempting, in the heat of the class struggle, to converge with parties, groups, sectors, and tendencies from different countries with whom we share experiences of political struggle in the streets. We want a joint movement for an international of socialist revolution, which for us means the reconstruction of the Fourth International.

We invite you to join us in this ambitious and thrilling task.

As our dear comrade Leon Trotsky said on the occasion of the founding of the Fourth International:

Dear friends, we are not a party as other parties. Our ambition is not only to have more members, more papers, more money in the treasury, more deputies. All that is necessary, but only as a means. Our aim is the full material and spiritual liberation of the toilers and exploited through the socialist revolution.

Each one of us has this ambitious and thrilling historical responsibility, which we invite you to join, to carry on our backs a particle of humanity’s destiny.