Rebellion in the Southwest: Interview with a Striking Arizona Teacher

Left Voice interviews an Arizona teacher on their walkout, which begins on Thursday. 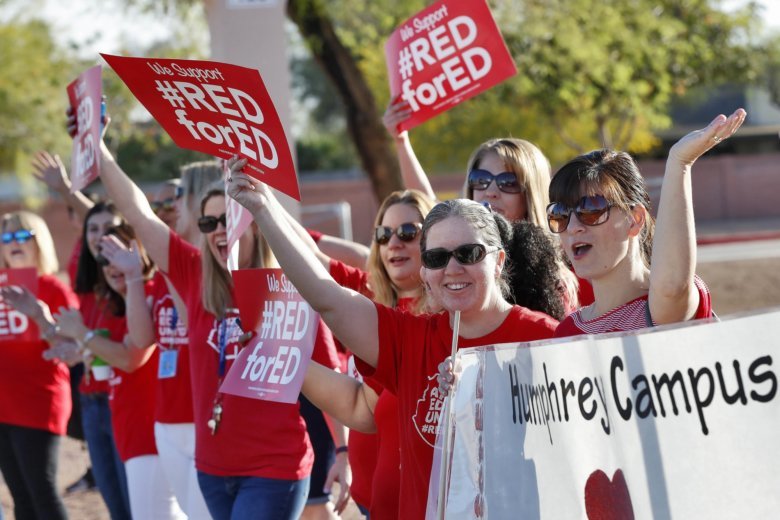 This interview was conducted in the lead-up to the April 26 walkout of Arizona teachers and other school staff organized by Arizona Educators United activists. Tatiana Cozzarelli, a fellow educator and Left Voice editor, asks Sa Jo* about the state of public education in Arizona, the role of anti-immigrant racism, and how she views the current fight back by teachers. Sa Jo, a Phoenix native, has been a teacher for 11 years. She currently teaches Music to students from kindergarten to eighth grade.

I would say the physical conditions of many schools are pretty bad. There are problems with mold, with walls caving, out-of-date textbooks, very little in the way of supplies… basic infrastructure issues. As far as teachers ourselves, many of us are just exhausted. We work long hours, and we aren’t compensated for the amount of time we put into our schools. Support staff have it even worse, which is why one of our demands is higher pay for them.

The wages in Arizona are some of the lowest in the country. There are competing figures that put us from 43th to 48th in country in terms of lowest pay. There’s also a big disparity between districts. When I was first teaching, I made 30k a year. It took me moving out of state and back again to make the little bit more than I do now, after 11 years. Most of the teachers I know are either living at home or with roommates. Our millennial generation is saddled with student loan. I’ve had to do forbearance on my debts. Besides the fact that our pay is some of the lowest in the country, we also pay some of the most into state retirement. Part of the problem is that they underfunded retirement for many years, and they now are playing catch-up, and they are doing it on the backs of the new and current teachers.

One of our hardest sells is that Arizona has been “school of choice” for 20 years. We have created a system of charter schools that has brought in all this corporate nonsense to the public system. A lot of the large charters that are large corporations have threatened to immediately fire any teacher for any activism whatsoever. And those teachers are AT WILL – they are not allowed to join the AEA.

Our charters pay less than the public state average. Charter teachers are trying to be part of the movement, but they are really scared, and I don’t blame them. And then we have a pretty huge private school sector, religious schools, that are getting vouchers that are eating away at our public education budget.

What are some of the systemic issues affecting Arizona schools, beyond the issues of funding and salary?

There are so many systemic problems. For instance, there are really big issues with how we structure our language classes. Many years ago, Arizona passed legislation that schools would only teach in English, and also that everyone has to pass standardized tests. Kids are reprimanded for using Spanish in the classroom. We as educators know that kids are best taught in their own language, but Arizona has decided we can’t do that.

My school district is about 96 percent Latino, and they would be amazing voices in this movement, but many of them are undocumented and don’t feel they can get involved because of the fear of being deported. Yesterday, I had a student in tears because her whole family is being deported. We have ridiculous rules about who can live here and who can’t. This is where we need to speak up for these families who want a good education for their kids but face all these obstacles. But it’s about all the systemic issues – education, but also immigrants rights.

Also, funding for schools is tied to the school’s grade. These policies have resegregated schools along racial and socio-economic lines. It’s all been building since the start of the charter movement and the English-only law, going back 30 years. The entire public school system is being slowly dismantled on purpose. There are GOPers who would love to see the entire education system privatized for their benefit. There are populations of people who don’t think some students deserve an education.

We are fighting these systemic issues. The budget is a symptom of deeper issues. Hopefully people get some class consciousness and their views evolve.

Black and brown bodies do not matter to most of our state legislature. Poor kids don’t matter. And especially our native students – they really don’t matter to the government. Their funding is paltry. There is a serious, systemic racism problem in the state, and education is just one example of it.

We’ve been stagnant since 2008, and we haven’t gotten back on track. Pay for performance. 301 funds.

Arizona is experiencing a population boom, and the school system has not received adequate funding for this influx of people, nor has funding returned to pre-recession levels. None of our salaries have recovered, even though the people at the top have gotten raises.

The governor was sued for selling obligations to the Arizona state budget. It’s part of the Arizona state constitution that education must be adequately funded. The last two years, Arizona Education Association, supported proposition 123 that was supposed to resolve the lawsuit

The other issue is charter schools where people can take funding vouchers to private schools. More and more of the general education fund is being bled out into private education, including religious schools. Up to 93 million dollars in vouchers are going to private schools. The “free choice” (public or private) has created a two-tier system… it has contributed to gentrification and white flight. Public school teachers aren’t paid well and don’t want to stay.

What are your demands?

How have you all organized?

It’s been six weeks only — so it says a lot for our organization. It shows you how fed up Arizona teachers are that we’ve been able to pull together 40,000 people in six weeks. Support staff have been with us from the start. Thursday is the day we walk out.

Two weeks ago, we started having walk-ins at school. A lot of Arizona media has been helpful in spreading the word and giving positive coverage. It’s been a giant social media and word-of-mouth campaign.

Arizona is a right-to-work state, which means you aren’t required to join a union to work in a school. Partly because of that, the Arizona Education Association (AEA) suffers from low membership. It’s a generally conservative state, including many teachers who wouldn’t’ think of joining a union. Thankfully, there’s been a grassroots movement called Arizona Educators United, started by a local music teacher, Noah Karvelis. AEU has been an amazing groundswell of people from all walks of life, 40,000 plus, speaking out and saying what’s happened is not ok. Joe Thomas, president of the AEA, was asked at one point what the union was going to do, and he said, “Go start a movement!,” and that’s what we’ve done.

So AEA has stepped in as a support, but not as leadership of this grassroots movement. Whereas AEA did little things like “teacher appreciation week,” this is something bigger, that AEA would never have been able to accomplish. This is for the better in a state where organizing is extremely difficult. Many people are taking part of this movement because it’s non-partisan and is specifically about teachers.

How did the other teachers’ mobilizations affect Arizona teachers?

I can tell you, watching West Virginia was really inspiring. West Virginia changed everything. Oklahoma as well. Looking at other states with similar political demographics — especially conservative states — and saying ‘We can do this!’ It’s really inspiring. Teachers are standing up for what’s right. Our kids deserve to be in safe buildings with supplies and teachers who want to teach them. So seeing other people standing up for the right thing really inspired a lot of people.

We also learned from Oklahoma. The biggest lesson we can learn from that situation is to not be scared and to not make the wrong concessions. The governor is trying to get us to take this 20 percent by 2020 deal. This doesn’t address the AEU demands, and is not sustainable. It would be funded on the backs of other services like VA and Disability Services. The governor wants to blame the teachers, saying teachers are bad because if they get a raise, it’ll be off the backs of all these other needy people. Teachers are being slandered. The governor is playing politics, blaming us, giving disinformation.

This isn’t a sprint; it’s a marathon. They can threaten us, but if they do, they won’t have any staff. We have the position of power right now to get the legislature to do the right thing and give our schools funding. And if they don’t, we’re gonna be canvassing all summer long through the 115 degree heat to get a funding bill on the ballot. We think people would vote for it. Even if the legislature won’t do it right now, we’ll do it.

I find myself thinking, it’s time for a new American labor movement. And if teachers need to start it, let’s do it. I’m hoping that this kind of movement will take some of our working-class, conservative people and establish some kind of class consciousness, more favorable to unionizing and not letting businesses rule us. There’s a unique American phenomenon that asserts that everyone is just a temporarily embarrassed millionaire. It’s not true. We are the working class.

What is going to happen on Thursday?

On Thursday and Friday, all, or almost all, of the schools in the state will be closed. Teachers are walking out. The music teachers started a band, and we’re all going to the capital. From there we will wait – that’s really all you can do. We will be doing walk-ins and canvassing the community in the lead-up to Thursday. We’re going to line the roads with teachers every day until Thursday. We will be doing community outreach to families so they understand that we are doing this for them.

Our district has been pretty supportive. Other districts aren’t as lucky. Some teachers have been told that if they walk out, they will be abandoning their job and will be subject to discipline.

So, you think that in the schools where the superintendents have come out against a walk-out, the teachers are going to defy them and strike anyway?

I think so, only because there is so much support from everyone else. People have almost no fear about job security, because who are they going to hire? There are uncertified people staffing certified positions. There’s a shortage of teachers. A lot of teachers are calling the bluff of retaliation. How are they going to punish thousands of teachers? They can’t fire all of us.