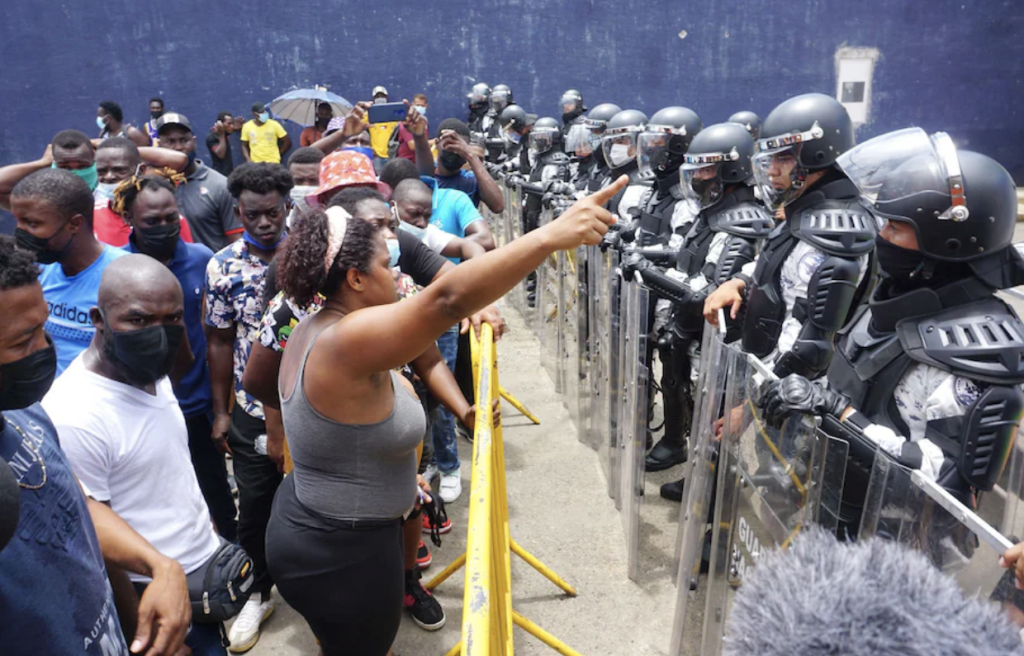 Migrants from Haiti stranded in Tapachula, Chiapas decided to leave the city this past Saturday, a day before President Andrés Manuel López Obrador arrived. They were severely repressed by the National Guard and members of the National Institute of Migration (INM), who recently detained around 300 people.

After a week of protests at the Mexican Commission for Aid to Refugees (COMAR) requesting the expedition of their refugee proceedings with no response from the authorities – a process that could now take up to a year – the migrants decided to leave for Mexico City. This contingent was joined by Central American migrants and Cubans, including men of various ages, pregnant women, minors and young people.

Currently, there are more than 5,000 migrants of Haitian origin and about 3,000 people from different Central American countries and Cuba waiting for the COMAR’s reports, where, according to local media there are also complaints about the lack of Covid-19 protocols.

The López Obrador administration has been showing ample signs of deference towards the U.S. with respect to its immigration policy. The U.S. has since October 2020, made more than 1.2 million arrests and deportations of migrants who manage to cross the U.S. border, according to the Bureau of Customs and Border Protection.

The pressure from the White House by Joe Biden’s administration has included threats to withdraw “economic support” particularly for Central American governments, as violence, extreme poverty, a humanitarian crisis aggravated by corruption, and the current global health crisis prevail. The U.S. is intensifying its anti-immigration policy and redoubling its border military control, while AMLO’s incompetent government persists in a policy with an over 150 billion peso budget for the National Guard in order to militarize the border with the United States.

The Mexican president continues to defend this strategy to prevent migration, recently mentioning that “containment is necessary.” He added in a recent morning conference that: “Yes, we will continue to contain it, but we must look for fundamental, structural solutions, and the United States also has to give scholarships, and it has to allow temporary work visas, for Central America, and it does not affect them at all, because [this workforce] is needed in the United States.”

The Two Faces of the “Fourth Transformation”

Faced with the recent Taliban control in Afghanistan, the Mexican government announced its openness to receive asylum seekers in the country. So far, they have accounted for the arrival of three groups of refugees, the last of which consists of 86 Afghan refugees.

While images of immigration agents beating and detaining Haitian and Central American migrants in the southern region of the country were circulating in social networks, the Mexican Foreign Minister, Marcelo Ebrard, paradoxically celebrated the arrival of the refugees with an official statement: “The reception of people from Afghanistan is a political decision of the Mexican State and carried out in full compliance with our country’s historical tradition of humanitarian assistance.”

The action by the government of the so-called “Fourth Transformation” or 4T has not only been taken up by other Latin American leaders such as Chile and Costa Rica, but has also undoubtedly provided an opportunity for different governments around the world which, in the face of their own domestic crises, attempt to show a “humanitarian” image to an international audience, while keeping their borders closed.

Mexico stood out in the diplomatic field in the 20th century by applying the norms of international humanitarian law and asylum processes, historically establishing itself as a place of refuge.

The action of the government of the 4T undoubtedly refers to the response of the Cardenista administration in 1937 to the Spanish Civil War and the Republican refugees. In 1954, Guatemalans left the country after the fall of the Árbenz government. In the seventies, in the midst of the “dirty war”, while repressing social protests in the country to further align with the orders of U.S. imperialism in Latin America, the PRI governments received Argentines, Chileans, Uruguayans, Peruvians, Colombians, and Brazilians threatened by the dictatorships in those countries. At the beginning of the eighties, they took in the refugees from the civil war in El Salvador and, finally, took in the staggering number of 100,000 Guatemalans in Chiapas.

In early July of this year, the assassination of the ultra-conservative President Jovenel Moïse marked a turning point in the social and political crisis in Haiti. This solidified a movement against a government that undoubtedly faltered in the face of massive mobilizations rejecting the administration and the package of economic adjustments that continue to plague the majority of the Haitian population. As if this were not enough, more than 600,000 people were affected by the recent earthquake and the consequences of the tropical storm Grace, with 12,000 wounded and more than 2,000 people dead.

However, this does not seem to affect López Obrador’s foreign policy, which contradictorily shows its two faces: on the one hand, a discourse and a foreign policy proclaiming non-intervention, defending peace, that is in favor of national sovereignty and the fight against oppression; on the other hand, a domestic policy characterized by exclusion and repressive measures at all levels, including the army, the INM, and the National Guard.

It should be noted that the aid granted to both asylum seekers and refugees is based on the protection of the lives of the victims of persecution as well as the defense of human rights and international solidarity. This current contradiction shows its clear limits.

Mexico is renewing its levels of dependence, consolidating itself as one of the most restrictive countries in the region, whose task is to obey the orders of U.S. imperialism which favors the free transit of goods and imposes all kinds of restrictions on the free transit of people.

We socialists denounce the criminal anti-immigration policy of the López Obrador government in concert with U.S. imperialism which orchestrates extreme persecution against Central American, Cuban, Haitian, and Congolese migrants. We maintain that a real solution for the migrant community and an end to the current humanitarian crisis can only come from the working class of the continent, together with peasants, native and indigenous peoples, and women and youth who have resisted the attacks of these regimes in our countries, all fighting together to win free passage, critical healthcare, and safe and free shelter for our fellow migrants and workers.