Refinery Workers Go On Strike Across France to Protect Jobs

On Wednesday, January 3, Total refineries throughout France went on strike in response to the call of union confederations and the strikers at the Grandpuits site, in solidarity with their struggle and in defense of jobs across the country. 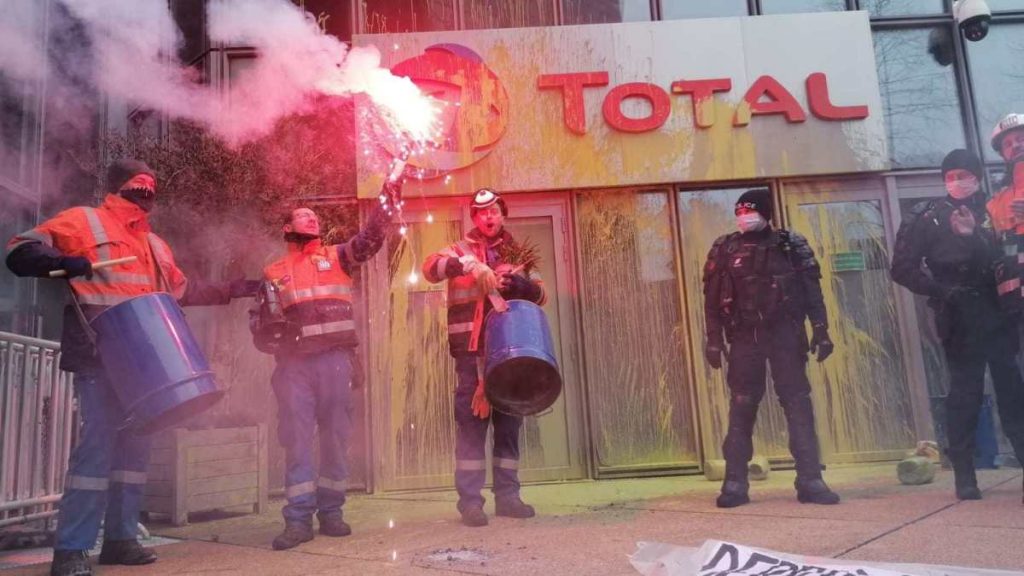 “Normandy, Flanders, La Mède, Feyzin, Donges are on strike since this morning. No product leaves all these sites for 48 hours!” That was the good news announced this morning on social media by Thierry Defresne, the CGT trade union confederation central delegate at the French oil and gas multinational Total. The refineries have largely heeded the call for a mobilization in solidarity with the strikers in Grandpuits and in defense of employment throughout the group.

This successful mobilization follows a call by the National Federation of Chemical Industries (FNIC, a trade union representing French chemical workers) and CGT Grandpuits for a 48-hour strike in solidarity with the struggle of the Grandpuits refinery workers, who have been on strike since January 4. In recent days, as Adrien Cornet reported during yesterday’s general assembly at Grandpuits, a team of strikers had traveled to various Total sites to carry the call and encourage their colleagues to join the movement.

“We have to show Total that we are united in solidarity, whatever happens. It’s not just the Grandpuits strikers they’re up against; all the guys in coveralls are getting angry. That’s what scares them!” Cornet told refinery workers in Normandy before heading to Feyzin.

As Reuters reports, “Total had indicated that following the strike call, product shipments could be disrupted at some of its refineries, but added that it would continue to ensure supplies to its service station network and its customers.”

However it works out, this first day of the solidarity strike is a fitting symbol and demonstration of how the Grandpuits refinery workers — through their exemplary struggle — have affected all the workers. But to make Total bend, and to oppose the attacks of the bosses more broadly, it will be necessary to go further than a 48-hour strike across one sector. What we need is a real battle plan for the entire working world — a perspective that must be defended on the streets on February 4, when a national day of mobilization has been called by a number of union confederations and organizations.

First published on February 3 in French in Révolution Permanente.