A new police training program in Jersey City illustrates the impossibility of police reform and the way that capitalism ruins every attempt at change. 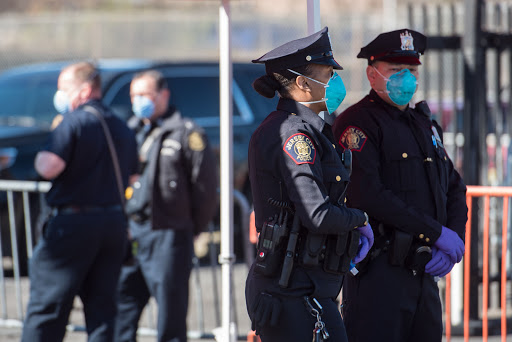 A few weeks ago, I walked into the parking lot of a Jersey City fire station and got some blood drawn for a Covid antibody test. It was free, easy, and relatively painless. This free and accessible antibody testing is no longer available and the reason is not complex: the city took a million dollars that had been set aside for their Covid response and created a new training program for police. Leftists have a longstanding and convincing critique of spending priorities under capitalism — namely that the ruling class takes money away from the most vulnerable and spends it on the military, the police, mass incarceration, and other tools of repression and violence because such repressive instruments make possible the inequality and exploitation of capitalism. You’d be hard-pressed to find more a straightforward example of this practice than Jersey City, which is taking away money meant to save lives during a pandemic and handing it directly to already overfunded cops who systematically harass and abuse longtime Black residents as part of a project to gentrify much of the city.

So far, so terrible. But this unjust reallocation of funds is more than just a story of fundamentally misplaced priorities. The million-dollar cop training is being provided by an ex-NYPD officer and Tomahawk Strategic Solutions, a private contractor and security consultant that boasts of its military pedigree. Activists on the ground have already mobilized against the training program, citing the NYPD’s long history of brutality and corruption, as well as the hiring of a private security firm that has already been used to train Jersey City cops involved in cases of abuse.

Despite this, the training is being openly touted by the city and its young, reformist mayor as their progressive response to nationwide and local calls for an end to police violence. Longstanding complaints about racist policing in Jersey City came to another head in early May when cops responded to an alleged disturbance on Bostwick Avenue by indiscriminately beating the majority Black crowd. These calls only grew alongside the national rebellion that sprung up later in the month after the murder of George Floyd, Breonna Taylor, and others. Stephen Fulop, Jersey City’s mayor, claims that the new de-escalation training responds to the demands of those on the streets. But more money for cops won’t help.

Cops exist to protect property and enforce unequal and racist social relations — it’s their job. In carrying out those tasks they will always act violently toward those they police, regardless of whatever trainings they complete. So, while the violent pedigree of the Jersey City trainers is especially alarming, even the best training will not alter the structurally repressive role of the police. Without fundamental, structural changes, what we are left with is a self-perpetuating cycle of utterly ineffective alterations. What this looks like in practice is that reforms inevitably fail to solve the problem but in their failure they always create an excuse for more reforms. So police forces already awash in decades of reformist schemes see more reforms — many of which make the situation worse. Locales where chokeholds are already barred get another set of laws barring chokeholds. Cops equipped with more “less-lethal” devices like tasers, mace, and tear gas use these weapons at increased rates, oftentimes using them to escalate encounters to violent or deadly conclusions. Police get more money for body cams meant to lessen their violence but these cops then turn them off when they kill and turn them on to increase surveillance when they feel like nabbing somebody. What we are left with is more cops with more money who are still protecting the status quo to the detriment of the vast majority. The critique of the limits of reformism is thankfully now common; it is why defunding with an eye to abolition has replaced reform as a goal of a large sector of the movement.

Why do so many supposed progressives and reformist mayors fall into this cycle of ineffective reforms? Minneapolis, New York, Atlanta, Jersey City, Los Angeles, and many other places with ongoing issues of police violence are at least partially governed by Democratic Party liberals and reformers who, to various degrees, came to power with promises of changing the police and improving the lives of the majority. Why do they uniformly fail so utterly and miserably?

The short answer is that these politicians and the state they represent are beholden to a system that requires police violence to function. One example of this is that the reforms these politicians put forward use resources drawn from capitalist enterprises to fund their preferred social services. And these enterprises need police. So, for example, a mayor who wants funds to do much of anything needs to keep property developers happy to boost housing prices — even mayors who claim to want to slow gentrification and hold police accountable leave both alone to secure property taxes. Liberal leaders become incredibly reliant upon capitalist enterprise and so will not challenge their profitability in any significant way.

In Jersey City, mayor Steven Fulop had generally reformist intentions for the city and its police force, but in order to make these work under capitalism he needed the revenue and job base offered by the waterfront developers who want to turn the west bank of the Hudson into an extension of New York’ s financial district. And what did these property developers and new “sixth borough” residents want? — homeless sweeps, “safety” from petty crime, an end to noise complaints, and evictions carried out swiftly to speed up gentrification. They wanted, in short, for the police to do what they were designed to do: to protect property and preserve a racist status quo.

If we want to do away with cops and the daily degradations and violence that is their job, and also fully fund the things we need — like testing during a pandemic — we have to abandon reforms that hand cops more money while simultaneously challenging the capitalist system the cops actually protect and serve. Without completely altering the social system under which we all live and toil, any attempts at change will always result in this dizzying merry-go-round of useless and counterproductive reforms masquerading as progress.