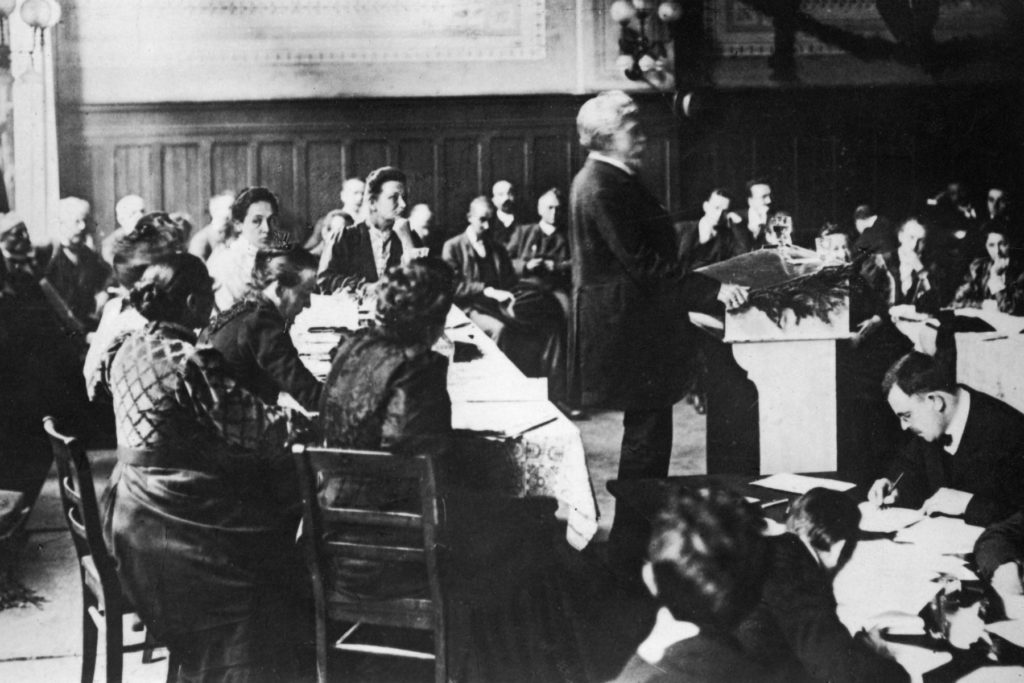 The Social Democratic Party of Germany (SPD) was slowly taken over by a bureaucracy. August Bebel speaking at the 1906 party congress in Mannheim.

Matias Maiello’s “Social Democracy and Imperialism: The Problem With Kautsky” is an important contribution to the renewed debate on socialist strategy in the United States and internationally. While much of the current discussion has focused on the relationship of electoral activity to mass strikes and disruptive social movements in winning reforms under capitalism and preparing the way for a socialist transformation of society, Maiello’s essay draws our attention back to how the debate on “reform or revolution” is intimately linked to the question of the socialist struggle against imperialism.

There is much that Maiello and I agree on. Most importantly, we agree that the relationship between reformism and pro-imperialist politics is not contingent but necessary. We also agree, as do left reformists like Eric Blanc, that reformism is not the result of a “bad theory” but of the dominance of a layer of full-time officials in the trade unions and social-democratic political parties. Put simply, reformism is the worldview of the labor bureaucracy.

We differ, however, in our analysis of the material roots of the bureaucratization of the workers movement. Maiello relies on Lenin’s notion of “labor aristocracy” to explain working-class reformism. According to Lenin, the export of productive capital from the Global North to the South since the late 19th century allowed large, “monopoly” capitalists to accrue “superprofits,” which were used to “bribe” a sector of the working class and create a labor officialdom. Thus, reformist bureaucrats defend their national imperialism in order to maintain the social basis for their relatively privileged position in the working class.

Unfortunately, the theory of the labor aristocracy, in all its variants, is without factual-empirical basis and rests on questionable theoretical assumptions. As Lenin’s own data demonstrated, the vast majority of productive capital exports (“foreign direct investment”) have flowed from one imperialist social formation to another since the late 19th century. While the more labor-intensive investments in the Global South tended to produce a higher rate of profit than the more capital-intensive investments in the North, total profits accrued from the Global South never accounted for more than 5% of total wages in the Global North—an amount insufficient to explain either the relatively higher wages of workers in the Global North or the existence of a full-time officialdom in the unions and parties. These empirical errors are ultimately rooted in Lenin and other Second International Marxists’ notion that the emergence of large corporations during the 1890s marked an end to “competitive” and the birth of “monopoly” capital. Sharing bourgeois economics’ idealized vision of competition, notions of “monopoly” (or “oligopoly”) ignore how real competition throughout the history of the capitalist mode of production has produced growing inequality and periodic economic crises.

Rosa Luxemburg, in her “The Mass Strike,” provides the basis for a more realistic account of the emergence of the labor officialdom and reformism in the working class. Ultimately, the material roots of both the union-party bureaucracy and reformist consciousness among broader layers of working people is the necessarily discontinuous nature of class struggle under capitalism. The vast majority of workers only occasionally engage in the mass, disruptive struggles (mass strikes, occupations, etc.) that confront capital and the state and build class consciousness and organization—at the height of working-class upsurges. Most workers retreat into “private life”—the struggle for existence—selling their labor power, working under the command of capital and trying to reproduce their family-households. Only a minority of workers remain active between upsurges, continuing the class struggle “by other means.” Historically, many of these workers became the “militant minority” of workplace and neighborhood activists who attempt to consolidate democratic organizations and foment small-scale strikes, demonstrations and other confrontational actions. A minority of the active minority, however, become the full-time officials of the organizations created in the upsurge—a workers’ officialdom.

The discontinuity of class struggle provides the basis for reformism. The relative passivity of most workers leads them to embrace a “conditional reformism”—the hope that they can defend and improve their living and working standards without confronting capital and the state. Most of the time, they hope that routine trade union bargaining and electing pro-working-class candidates to public office will be sufficient. While the reformism of the passive mass of the working class is conditional—and breaks down when workers are compelled to engage in direct action—the labor officials’ reformism is unconditional.

For the bureaucrats, the union and party are not simply instruments of working-class struggle but are the source of their distinctive lifestyle. Even when their salaries are similar to those of the workers they represent (which is clearly not the case in most capitalist societies today), the labor leaders no longer work under the despotic supervision and management of capital—they experience similar work autonomy to that of managers and professionals under capitalism. Anything that might endanger the institutional continuity of the union or political party—especially illegal strikes and demonstrations—must be avoided. Thus, the labor officialdom’s embrace of reformist methods—routine bargaining, the grievance procedure, electoral politics—is unconditional.

Both the conditional reformism of most workers and the unconditional reformism of the officialdom seek to build working-class organization as a counterbalance, rather than class alternative, to the power of capital. If the interests of capital and labor can be “balanced,” then crises of profitability can be avoided and gains for working people can be won and secured. Ultimately, an enduring “class compromise” is impossible without the consolidation of parliamentary regimes and trade union legality. For the mass of passive workers and the labor bureaucracy, the capitalist state can be a neutral instrumentality that can establish equilibrium between social classes. Whether it is by creating a legal framework for union recognition and bargaining, establishing social welfare programs that provide minimal protections from labor market competition, redistributing income to workers or engaging in “countercyclical” monetary and fiscal policies, it is the capitalist nation-state that becomes the be-all and end-all of reformist politics.

It is reformists’ fetish of the capitalist nation-state that leads them invariably to adapt to their “own” imperialism. Both the passive mass of workers and the labor officialdom, in their desire to avoid direct confrontations with capital, look to the state to “civilize” capitalism. This identification with the nation-state necessarily leads them to defend the “national interest” against any and all threats—including from other imperial powers or insurgent anti-imperialist movements. Put simply, the illusion of an enduring class compromise at home leads reformists to support “their” imperialism abroad. In sum, challenges to imperialism (and its purported “superprofits”) in the Global South will not undermine reformism in the Global North. Rather, successful challenges to reformism in the class struggle in all zones of the capitalist world economy will allow the growth of anti-imperialist and internationalist consciousness.