Initial conclusions from the debates that took place during the recent Tenth International Conference of the Trotskyist Fraction. 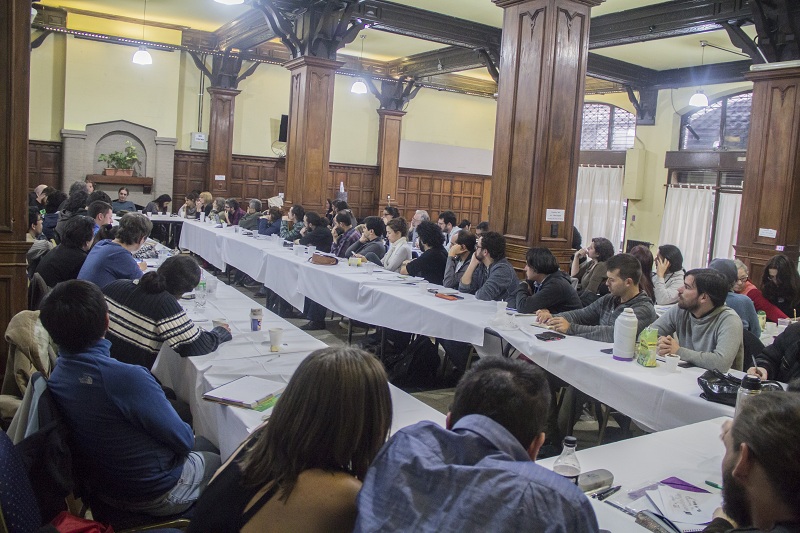 The main topics of the conference included the international economic situation, developing political phenomena in the US and the UK, the processes of class struggle in France, the situation in Brazil since the institutional coup, and Argentina after the neoliberal right’s return government. Another major point of discussion was the role of various existing leftwing currents–many of which, due to underlying opportunism or sectarianism, have proven impotent when faced with the task of developing a revolutionary strategy in a dynamic international political context. Lastly delegates discussed the challenges and opportunities that lie ahead for revolutionaries.

In the following adaptation of an article published on August 19, PTS national leader Emilio Albamonte touches on the characteristics of reformism today, differences between “neo-reformism” and labor reformism, strategies for building revolutionary parties today, and the role of the La Izquierda Diario international network in the construction of organizations making up the FT.

Following the global crisis, we have witnessed the rise of reformist organizations in core countries. “Neo-reformist” parties such as Syriza and Podemos differ fundamentally from the classical reformism that marked the twentieth century, exemplified by the German Social Democratic Party or the post-WWII Italian Communist Party, which were based in the trade unions. In contrast, the key characteristic of today’s neo-reformism is its detachment from the main battalions of the working class. This marks the emergence of a petty-bourgeois reformism whose principal social base is found among university students, “overeducated” sectors (by capitalist standards), the underemployed, and youth in precarious conditions–as is the case of Podemos.

Traditional mass parties with social democratic aims were historically based in the organizations of the working class. One of the most recent organizations to emerge in this fashion was the Brazilian Workers’ Party (PT), borne in the 1980s out of the CUT confederation trade unions. However, traditional social democratic parties have since broken ties with their working-class base and transformed into the very proponents of the neoliberal offensive.

Today’s actually-existing labor reformism can therefore not be found in the parties, but rather, in the trade unions. This is not to say that all unions take on a reformist function, that is, raising workers’ demands and pushing for improvements in workers’ general status in society. As is prominently expressed in the United States, some trade unions have dissociated almost completely from these “evolutionary reformist” aims, instead shifting to economism, focusing on occupational interests and collective bargaining.

For example, we saw how labor unions in France responded during height of the fight against Hollande’s labor reforms. CFDT leader Laurent Berger seized the first opportunity to call for an end to the struggle. Meanwhile, the CGT under the leadership of Phillip Martinez, or the actually-existing labor reformism as described above, called for a veritable “strategy of attrition,” which would gradually dilute the great forces expressed by the pickets, strikes, and demonstrations of hundreds of thousands throughout France.

Nonetheless, as noted by the comrades of the Revolutionary Communist Current (CCR) at the conference, the present-day union bureaucracy in France is much weaker than the bureaucracy that was completely controlled by the Communist Party in May 1968, which at the time enabled the prevention of a revolutionary outcome. In contrast, it has become known that Phillip Martinez of today’s CGT was obliged to align with theNuit Debout youth movement, whereas the CGT of 1968 erected a wall between radicalized students and the trade union movement.

Of course, the unions are as diverse as the working class in different countries. In the “East,” as in the case of China, we see unions utilized by the Chinese Communist Party much like state institutions; in the “West,” the neoliberal offensive has brought about a leap in the State integration of unions. These processes stem from the enormous global expansion of the working class in recent decades, paralleled by multiple processes of fragmentation: divisions between contracted and permanent labor, formal and informal, native and immigrant, etc.

In this context, issues of the independence of trade unions from the state, the unity of workers, union democracy, tactics likes the Workers’ United Front (ie., “march separately, strike together”), and raising demands from reformist bureaucracies are of crucial importance for the intervention of revolutionaries today.

The strategy for the construction of revolutionary parties was another key debate during the FT conference.

Since the twentieth century, two party-building strategies have prevailed within the labor movement. The first is the mass party, which is generally an electoral apparatus that organizes a passive membership base around a reformist program and “manages” the unions. This is the party form of the classical labor reformism mentioned above.

The second being the strategy for a “vanguard party with mass influence” first formulated by Lenin; that is, a party of combat in class struggle—one that rallies the vanguard behind a revolutionary program, and from there, wages a struggle to gain influence among the masses through the development of revolutionary currents in the labor movement, student movement, intellectuals, etc.

Between these tendencies, there is a debate around the strategy of party-building; not sparked by the resurgence of large reformist workers’ parties, but rather because certain left-wing groups claiming to be anti-capitalist are attempting to emulate this strategy on a miniature scale.

For example, the Brazilian Partido Socialista dos Trabalhadores Unificado (Unified Socialist Workers’ Party-PSTU) has been content with building a small alternative union confederation (Conlutas) and taking refuge in syndicalism, while the Partido Socialismo e Liberdade (Party of Socialism and Liberation—PSOL) has focused on electoralism, with component groups like the MES entering into alliances with the likes of Marina Silva (a recycled proponent of neoliberalism, who has the backing of Banco Itau); a “division of labor” of sorts, in which no one has a comprehensive strategy for gradually influencing the mass movement in a revolutionary way.

At varying levels, the organizations that make up the Trotskyist Fraction strive to develop a different practice through a Leninist perspective. For example, we the PTS in Argentina employ La Izquierda Diario, public figures, and parliamentary representatives to engage the most advanced sectors in order to influence the masses, at the same time developing revolutionary currents within the labor movement, student movement, women’s movement, and intelligentsia.

This sets us apart from the Partido Obrero (Workers’ Party–PO), which pursues a policy of alliances “from the top” in the trade unions, labor movement and student movements, while neglecting to build militant rank-and-file organizations. Thus, they abandon construction of the Workers’ United Front, refrain from making demands on union officialdom, and defend the idea (under different names) of ​​an alternative union confederation controlled by the PO.

In contrast, the PTS considers the construction of a defensive United Front against the capital as essential, because in times of ascent such a formation has the potential to yield soviet-type organisms; that is, the United Front could pave the way for an offensive to create a workers’ government in the anti-bourgeois, anti-capitalist, revolutionary sense.

The development of the La Izquierda Diario international network, complete with 11 news outlets in five languages, ​has greatly changed the FT’s overall structure as an international current. For instance, the PTS has reinforced its means of mass agitation, after having gained national influence through the conquest of elected positions in parliament, interventions in the media, and the electoral campaigns of the Frente de Izquierda y los Trabajodores (Left and Workers’ Front–FIT).

At the National PTS Congress in June 2016, we discussed the transformation of the newspaper into a collective organizer . This constitutes a revolution in our political practice, which goes hand in hand with the development of revolutionary currents within the unions, student movement, women’s movement, etc. It amounts to embracing Lenin’s argument on the role of the newspaper in the construction of a vanguard party with mass influence, but in 21st century terms and with contemporary methods.

The FT organizations exist in different realities and are at various stages of development. In Brazil, Chile, Mexico and France, where we have hundreds of militants, the foundation of the news outlets represented a leap, in some ways greater than that of the PTS in Argentina; these groups were able to for the first time achieve broad, national political visibility. The same goes for the other FT organizations, to varying degrees.

In France, the Révolution Permanente became a voice of the youth and workers who took to the streets to fight against the labor reform. The website reached widespread recognition among left intellectuals, mentioned in the New Left Review as a significant example of new alternative media.

In Brazil, Esquerda Diário came to represent a clear position opposing the rightwing institutional coup, yet independent of the Brazilian Workers’ Party (PT). We can say that it fulfilled the role of expressing symbolically a sort of “third party” during an acute political crisis, even as traditional parties of the left like PSOL and PSTU divided their sympathies between the putschist camp and Lulism.

To varying degrees, there have been other examples of such influence via the newspapers, in a specific sector or through class struggles, which makes the development of our groups much less propagandistic in nature. Yet overall, we are still at the stage of accumulating cadres to address the movement of the masses on a broader scale. Therefore, propaganda efforts and the training of cadres are essential to ensure that the new comrades joining our ranks become revolutionary Marxists, or revolutionary politicians of the proletariat.

Emilio is a leading member of the Party of Socialist Workers (PTS) in Buenos Aires.