Reforms to Transformation: Visions from the Frontlines of Twin Cities Educator Struggles

Educators in Minneapolis are currently in their second week on strike. Here, two Twin Cities educators write about the state of public education and the fight for better schools. 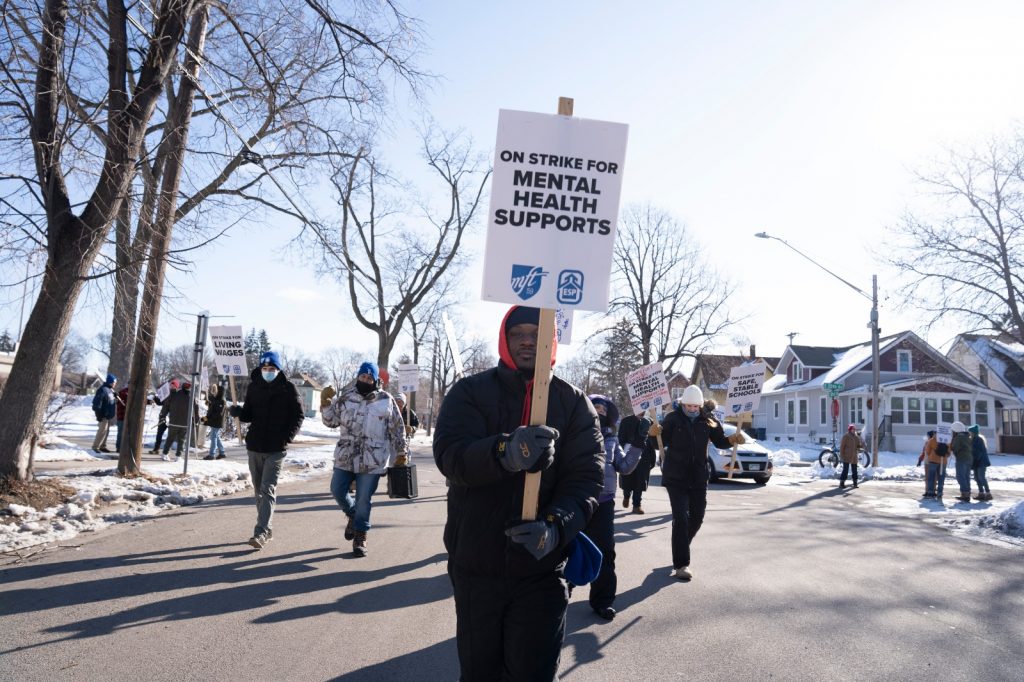 It’s been frigid cold and over 4,000 Minneapolis educators are out on the picket lines striking for a second week. Smaller class sizes, improved health care, more mental health supports, competitive pay for teachers along with increased pay for educational support professionals are central to our demands. Still, spirits are up. We know our cause is just. Our demands are not only what educators and students deserve, they are 100% possible. The powers that be say there is not enough money, yet our state recently touts a 9.3 billion dollar surplus. Educators in St. Paul were set to go on strike at the same time, yet at the last minute came to an impressive deal with the district. This victory lets us know victory is possible in Minneapolis. Indeed, the solidarity between districts and educator union chapters serves as a pathway forward for the labor movement. Possibilities for even bigger demands in future struggles are possible now more than ever before.

Minnesota has one of the worst student to counselor ratios in the country with the national student to counselor ratio being 430:1 and Minnesota being above 600:1. Our Educational Support Professionals (ESPS) are central to the functioning of our schools, yet are paid as low as $24,000 a year. A large percentage of our ESPs are educators of color. We are demanding $35,000 a year to start. We are also demanding protections against layoffs for educators of color and increased supports for new BIPOC educators. Covid-19 is also a factor, as we demand spread mitigation, and support for educators and students sick from COVID.

In the absence of leadership from the top, it’s fallen on us to bring attention to the impacts of underfunding on our schools. In 2018, the St. Paul Federation of Educators partnered with community researchers on a report titled “Minneapolis and St. Paul Public Schools’ Decreased Funding.” The research found that from 2003 to 2018, real per-pupil funding decreased by $3,049 in Minneapolis Public Schools (MPS) and by $1,610 in St. Paul Public Schools (SPPS). MPS and SPPS serve over half of Minnesota’s Black students as well as a plurality of our Latinx and Asian students, while serving less than 1% of White students. Funding in all other Minnesota districts, which serve 99% of White students across the state, decreased only $770 per student.

This racialized divestment from our students has caused them to lose access to programs that students in wealthy, majority-White districts take for granted: music, art, tech ed, and college counseling. It’s caused poverty wages and stagnant benefits which drive new educators out of the field before they are able to hone their craft. Meanwhile, the Minneapolis Police Department budget has ballooned to include thousands of dollars in bonuses paid for by our students’ parents, while Saint Paul tries to overturn rent control measures passed by referendum. In both cities, sustainable schools have been a low priority for elected officials except when a photo op is needed.

As our community schools reel from budget cuts, MN’s well-heeled nonprofit sector hoards money and pours it into grants and financing charter and private schools that offer even worse compensation and no elected voice for parents. Administrators and school board members have consistently failed to challenge corporate tax rates and partner with educators to demand equitable state funding. The complacency of our elected and appointed leaders has brought us to the point where educators have to take the power back to the community by striking.

If Covid-19 has shown us anything, it is how vital public schools and their staff are for capitalism and society as a whole to function. Without the underpaid labor and love of our dedicated ESPs and licensed staff, no other work is possible. As this school year began,  as we demanded safety on the job and health protections against the virus, the praise educators received in 2020 has turned to disdain. Educators leaving the profession and a shortage of new educators has led to hundreds of open positions across both cities, and schools were forced to resume standardized testing as if nothing had changed. Administrators talked about test scores instead of student wellness. School board members dismissed parents whose schools were threatened with closure and consolidation as “the loudest voices in the room”. The lessons of the pandemic were buried under business as usual.

MFT’s current strike and SPFE’s 2020 strike are centered on fundamental truths: that business as usual was insufficient, that students are not commodities to be traded, and that educators’ working conditions are students’ learning conditions. Dignified wages and schools full of mental health supports and small classes are the bare minimum that we need to build a better world for our students and help our communities thrive.

While our demands certainly fall under bargaining for the collective good, we believe we as educators need to demand even bigger and radical demands that address the needs of our communities in the age of an empire in decline and climate breakdown.

We want and need fully funded community schools and our communities will accept nothing less. After school programs, daily community dinners, and partnerships with community organizations have been visioned and maintained by the labor of our ESPs and licensed educators. SPFE has a nation-leading home visit program that builds close ties between educators and families across zip codes and language. We’ve pushed for restorative justice practices in our schools that offer healing alternatives to suspension, and community-building among students. We have fought to keep these community-centered initiatives in our contract and build power in Minneapolis for the same goals.

In Minneapolis and St. Paul, working class and BIPOC families are finding it increasingly difficult to stay in the Twin Cities due to rising living costs driven by gentrification. Fighting for anti-gentrifying measures such as rent control like the Chicago Teachers Union has done, should be a key focus of Twin Cities educators. If our students lack stable housing, it is unrealistic to expect students to show up to the classroom with the brain space necessary to learn.

Starting in 2019, students across the globe started Fridays for Future going on strike for climate action. Twin Cities students joined the thousands of youth across the U.S. active in the struggle. We as educators should join them in demanding climate action, a transformative Green New Deal, and an eco-socialist economy. Schools should become climate center hubs where community members learn to nurture soil, grow food, protect water, and organize for community power. We need to prepare for coming environmental disasters by learning the skills necessary to withstand compounding crises. Lastly, we should center learning that allows community members of all ages to dream, to create, and to thrive. In short, we need to be preparing our communities and youth for the world that will be and can be.

The time is now to build the schools Twin Cities students deserve and for districts to respect the communities that raise them outside of our walls. The aftermath of the George Floyd uprising laid bare the rot and inadequacy in Minneapolis as it invested in policing over prevention, in cops rather than in our schools. These years have seen our members and neighbors get attuned to how powerful our solidarity across race, across language, and across the river can be. With this solidarity and defiance, we can build thriving community schools that will raise our future generations.

Jessica Garraway has worked as a substitute teacher for six years. She has been organizing and writing on matters such as wealth disparity, racism, LGBT liberation, women’s liberation, labor, and environmental issues for over 10 years.  She was active in the fight to stop the building of what would have been the first Tar Sands mine in the US, the Keystone, the Dakota Access, and Line 3 pipelines. She was also active in work to address police terrorism and reimagining public safety in the wake of the George Floyd Uprising. Her current work is focused on being active in her union, the DSA education caucus, and building a strong labor movement that can take on the climate crises. Follow Jessica on twitter @Deeplyjessica.

Jeff Garcia is a special education teacher and union activist in Saint Paul, MN. Born and raised in New York, Jeff comes from a Puerto Rican family and attended Macalester College. He began teaching in 2019 and was an active voice in the Saint Paul Federation of Educators strike in 2020. He hopes to lift up the voices of new and BIPOC educators and the community to build power for all St. Paul kids.