It is unbearably hot in Athens – and we can barely breath. Groups of people carrying supermarket bags are entering the central park Pedion Areos in Athens where dozens of migrants and refugees have set up camp in one of Athens’s largest parks. 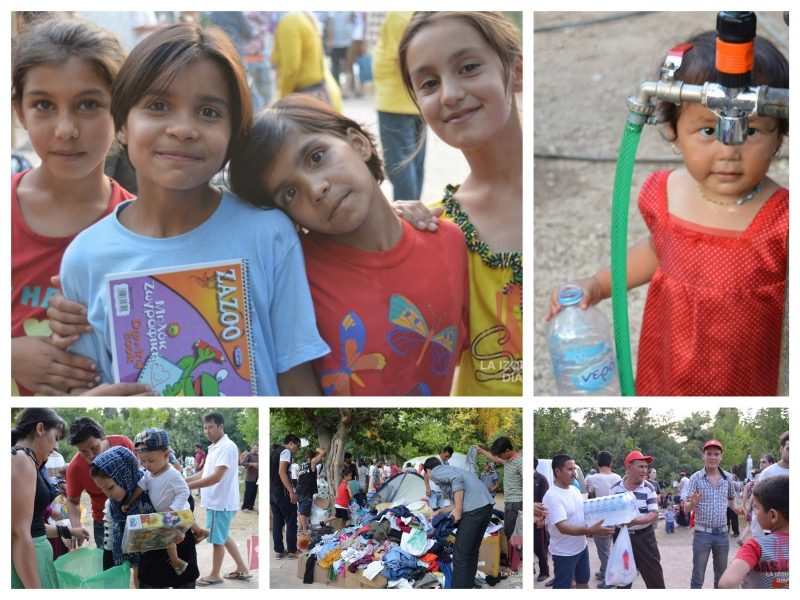 Refugee Camp in Athens in pictures

For two hundred families since the middle of July this park is their home – they are trying to survive. They want to continue their journey. Refugees are obliged to enter in contact with smuggling networks to leave their countries. They pay 1,000 per person to get smuggled from Turkey shore – six miles away in the distance – to the Greek islands of Lesbos and Kos. When they arrive on the islands, refugees are not provided with any assistance, aside from that provided by community volunteers. They left everything behind, trying to escape from war, persecutions, torture and other human rights violations. Arrivals to the Greek archipelago are already 60% higher than for the whole of 2014. According to Dimitra Koutsavli, spokesperson from Doctors of the World – Greece 600 people are arriving every day. This is a dramatic figure.

They are from Syria, Afghanistan, and other countries. However, when they arrive Greece they face a new deadlock, finding a failed asylum system and an inexistent system of first reception. We talked with volunteers from a social center for Migrants who explained: “Even if they could apply for asylum, they would not receive any kind of support from the Greek state, that is why they just want to leave from Greece.” They arrived at the port of Piraeus from Syria and hold a paper stating that they have a couple of days to decide what to do, stay in Greece or go to another country of the European Union.

Hidden from the main tourist attraction of the city, these 400 migrants encounter the indifference of the authorities and the state.

The park was designed in 1934 and its purpose was to honour the heroes of the Greek Revolution of 1821 against the Ottoman Empire. The park is a state-owned public ground, covering an area of 28 hectares. In front of the main entrance of the park there is an equestrian statue of king Constantine I.

An activist from an anarchist collective reminded us that this is the second refugee camp in Athens. A couple of months ago a group of Syrian refugees created a camp in Syntagma Square, but the police evicted them.

We approach a woman who was entering the park carrying bags containing nappies and food. She told us “solidarity doesn’t take a leave. In my workplace we gathered some emergency food and clothes so we could contribute as well.”

We talked with one activists of the coordinating group, Kazim Rooish, president of the Afghan community in Greece. He told us: “When the refugees find out that they don’t know where to sleep, what to eat they come here. They have been living in tents pitched in the park over the last few weeks.” He also told about the lack of help from the state and the authorities. They say that they are looking into solutions but so far nothing has been done to relieve the situation of this families.”

Kazim added that these families don’t want to stay in Greece; they want to go to another country of the European Union. Thousands of refugees will still keep on coming because war and violent situations”.

Amid of the economic crisis and the heat of the summer, the response of the citizens of Athens is overwhelming. There are solidarity initiatives by volunteers from NGOs that come to help clean the area. But people in the Exarchia quarter provide help too. Items are brought in by people on the spot are gathered, all those handed over by ordinary citizens that never ends coming by and giving whatever they can afford.

It is really inspiring to see people in solidarity work constantly on identifying the needs of the refugees and the migrants. This is a striking contrast to the lack of help of the government which only help was to install a tap for 200 families. The government has abandoned these families and is ignoring their demands. Hadn’t been for the help provided by the local community people in this camp would not have water, nor food, let alone to cover their basic needs.

The desperate journey of the refugees in Greece is a stain of shame for the the Greek government.