Members of Teamsters Local 533 in Reno, Nevada, are on strike against a notorious union-hating company that is trying to undo a remarkable gain the workers won nearly 40 years ago. 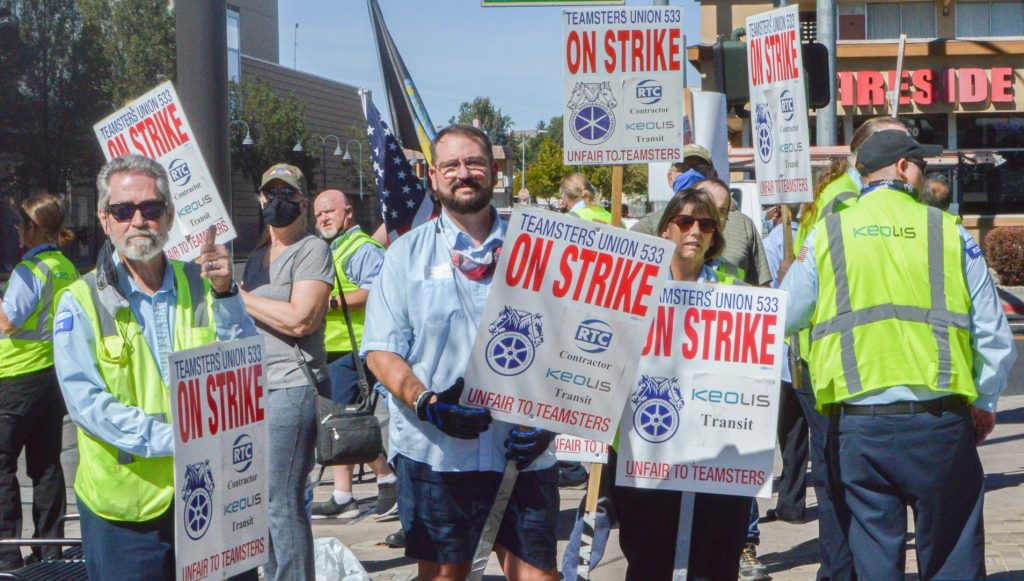 Photo: This Is Reno

On August 3 in Reno, Nevada, workers for the Washoe County Regional Transit Commission (RTC) went out on strike against the RTC’s contractor, Keolis North America — a division of a notoriously anti-union company based in France that manages bus and rail operations in several U.S. cities, including Boston, Fort Lauderdale, and Los Angeles. The strikers — around 200 workers in all, including drivers, mechanics, and cleaners —  were provoked by Keolis proposing a new health plan for the workers — one that would replace their existing coverage with what’s known as Health Plan of Nevada.

That’s a plan offered to low-income families,” Michael Lansborough explained. “It’s a travesty for those who need that insurance when we can afford what we already have.”

Michael is a bus operator and shop steward for Teamsters Local 533, which represents the strikers working for Keolis in Reno. He spoke with Left Voice by telephone on October 17.

Workers continued to provide transit services throughout the region despite the company’s “shoddy handling of pandemic precautions that led to bus drivers getting sick with Covid-19 and working without a bargaining agreement since July 1,” reported This Is Reno.

That initial strike lasted 11 days, after which Keolis agreed to return to the bargaining table, along with a company-requested federal mediator. Those negotiations broke down, and the union went back out on September 27. All told, as of this writing, they’ve been walking the picket lines for 31 days since early August.

During those negotiations with the mediator present, said Michael, “Keolis kept on pulling all their antics. Even the mediator wasn’t pleased. We believe on the last day they came in with a bunch of proposals they could just easily throw away, just to appease the mediator.” The union agreed to the throwaway offers to show its willingness to work with the company. But Keolis refused to bargain in good faith on the union’s counter-proposal regarding bidding on shifts, which was a hybrid offer that incorporated some of what the bosses wanted. So, Local 533 had no choice but to strike again.

The main issue now has to do with driver scheduling. Nearly 40 years ago, the Reno bus drivers wrested a concession from the bosses that ought to be the envy of workers in every transit system in the world. It’s called “cafeteria-style bidding” — the process by which the drivers pick up shifts.

Keolis is demanding that workers surrender this conquest, this little island of workers’ control in a sea of management exploitation. “They want us to do that weekly instead of daily,” Michael said, in the form of week-long blocks. It sounds like the beginning of dismantling the system altogether. The company also wants to “make us work 14 hours a day and pay us for 11 hours. They’re trying to dismantle everything we do with our schedules, to make them as difficult as possible.”

Gary Watson, the union president, put it this way. “Our members have family-care needs that they need to take care of, whether it’s their children, their significant others, their elderly family members that they care for. The way they bid is essential for them to make sure they can take care of their family obligations, too.” He told local Reno media that maintaining the current shift-bidding system has no cost implications for Keolis, and that the push to change it is because the bosses want “power, and they want control.”

Losing on the cafeteria-style bidding issue would be a step backward not only for Reno drivers, but also for the entire working class. Teamsters Local 533 is on the cutting-edge of worker control over scheduling, and has been for decades. The procedure is “not as much of a precedent as it should be,” Michael stated. “That’s the way it should be everywhere.”

Meanwhile, as drivers continue to walk the picket lines, there are two or three buses running with scab drivers. “These scabs were either convinced to drop out of the union before they crossed the lines,” Michael explained, “or they weren’t members.” Most of the bus system, though, has ground to a halt.

Despite a handful of scabs, Local 533 has enjoyed great support from the community. “People bring us food, and some come out and hold signs.” On Saturday, October 16, strikers and supporters marched from one of the bus stations to City Plaza in downtown Reno demanding that the RTC “Fire Keolis!”

Other unions have also been coming to Local 533’s aid. “There was a union from the Veterans Administration that came to the rally” on October 16, said Michael. “SEIU nurses have come out, too. During the first strike, we had pipefitters, ironworkers, and electrical workers.”

Keolis is such a villainous company that it seems that the bosses go out of their way to do things that will encourage the community to side with the workers. On the Teamsters Local 533 website, the list of “bad behavior from a bad actor,” all there “in case the community has forgotten,” includes disciplining a driver for asking a rider to wear a mask during the pandemic, refusing to enforce federally mandated mask-wearing on public buses, and threatening to have the local’s president arrested for handing out masks on public property. Keolis disciplined a driver for bringing cleaning supplies to work because the company wasn’t providing them, underfunded the workers’ healthcare trust fund (which provoked a lawsuit) … and the list goes on.

Meanwhile, the union has gotten creative in how it portrays the bosses as it seeks to win community support. One such instance was dubbed the “Battle of Milk Run.”

Before the early August strike, there was a driver who had just had a baby. Michael picked up the story: “They weren’t allowing her to get off the bus to pump her breast milk. She asked for a private area instead of doing it on the bus. They gave her this nasty, dirty shower room that was never cleaned, and gave her a key, but then the key all of a sudden wasn’t operational. Then they claimed that they lost the key. This went on for several weeks.”

The union took action, standing with a big banner that reads “Keolis Transit hates lactating mothers and their babies!!” at a prominent downtown location. The banner also urged people to contact a Keolis executive and “ask him why” and included his phone number.

“The company capitulated an hour after we went public” and, Michael said, “an hour later, they found the key.”

During the August strike, they won public support through sharing the story of Michael’s own now 11-year-old son, Logan, who was born with congenital absence of tibia and had an operation at age 17 months to amputate both his legs. The union posted the story on Twitter. In Michael Lansborough’s words: “When Keolis first took over the transit system contract, I was trying to get Logan some new prosthetic legs but the company making the legs told me that [the insurance company] had informed them that I had been terminated from Keolis employment — which is untrue. I had never missed work other than doctor’s appointments, while Keolis always continued to deduct my premiums.”

A Part of “Striketober”

Negotiations begin again with Keolis on Monday, October 18. Michael Lansborough is part of the union’s negotiating team. Until then, the strike continues.

Asked his thoughts about the upsurge in labor militancy taking part across the country, of which the Reno strike is now a part, Michael was very clear. “I believe corporate America thinks their abusive ways are acceptable. Finally, people are gathering their voices together so they can be heard. If more people would do it, not only workers in unions but in unorganized occupations, if we all gathered together, well 100 voices are louder than 1. The unorganized need to be organized so we can all have the protections of the union.”