Protests are repressed and opposition leaders jailed in Putin’s Russia. 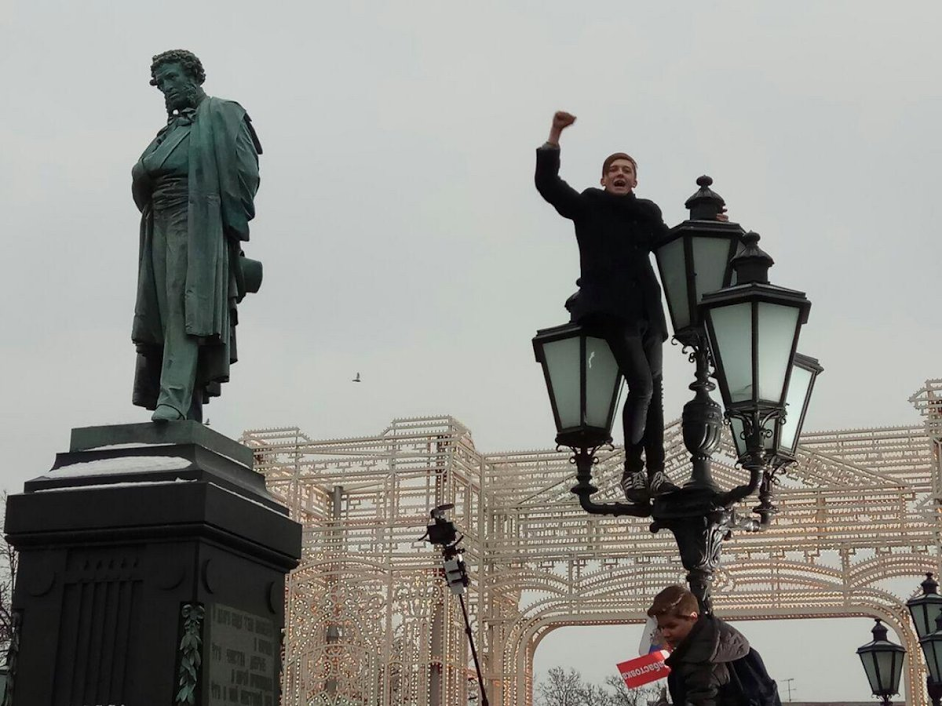 Thousands of demonstrators defied freezing temperatures and, in some cases, local prohibitions in Russia last Sunday to protest against the rigging of the upcoming presidential elections in March. It is almost certain that President Vladimir Putin will win a fourth term, after having controlled the levers of power in the country for almost 17 years. Aleksei Navalny, Russia’s most prominent opposition leader who became widely known for his denunciation of corruption against government officials, was barred from participating in the elections based on a past conviction on what are widely considered to be fabricated charges of financial crimes.

The protests took place in almost 100 cities across Russia and over 250 protesters were detained, including Navalny himself, who was wrestled into a police van as he was joining the march held in Moscow. Opposition headquarters were raided on the pretext of bomb threats and online media organizations covering the events were harassed by police in attempts to prevent their coverage of the protests, which were virtually ignored by state media. By the end of the day, most of the protesters had been released, but some remain in custody under strict public assembly laws that grant police permission to detain protesters for up to 30 days without a court order if charged with violations. According to the monitoring group OVD-Info, some of the protesters were beaten and face criminal charges and one of the detainees has been sentenced to 40 hours of compulsory labor.

The repression on Sunday is part of a broad crackdown launched by the government in recent years with the aim of stifling dissent and marginalizing the opposition, in a context of growing economic uncertainty and social unrest. From 2011 to 2013 there were widespread protests against the results of a legislative election that was considered fraudulent by broad sectors of the population. Afterwards, a series of new laws and amendments were passed, restricting rights of assembly and freedom of expression.

An amendment to the law on public rallies and the administrative code in 2012 significantly increased fines for violating rules on public assemblies, among other measures that have further restricted the people’s right to hold protests. Fines were also established for people who hold gatherings without official authorization and mass movements or protests could be subject to significant penalties if they interfere with traffic, cause damage to city infrastructure or breach sanitation requirements. In practice, authorities have broad discretionary powers to apply these regulations. As Human Rights Watch noted at the time, “the authorities can easily find any group of protesters at fault for any of these [offenses] citing, for example, alleged damage to grass in a park, alleged littering, or alleged interference with the movement of pedestrians or motor vehicles.”

Furthermore, as of 2014, criminal sanctions may be applied to those who repeatedly violate public assembly rules. The new law states that individuals taking part in protests could be subject to administrative arrest for up to 10 days for unauthorized participation and up to 15 days for obstruction of traffic and social infrastructure. According to this law, participants who repeatedly refuse to obey police orders could be arrested for 30 days and “repeated violations of the established order of organization or conduction of a gathering, rally, demonstration, march, or picket” constitute a criminal offense punishable with up to five years of imprisonment.

A 2006 law increased government control over NGOs and has been selectively used to target organizations considered “subversive.” It gave the national Registration Service unlimited powers to request documents for inspection, including for compliance with the constitution, laws and “interests” of Russia in the broadest terms. A variety of other measures, such as arbitrary tax, labor and fire inspections, have also been used to hinder the operations of groups that focus on controversial social and political issues.

Under amendments made to the 2002 Law on Countering Extremist Activity in 2007, any politically or ideologically motivated crime and certain forms of defamation of public officials may be classified as extremist activity. These regulations have been used repeatedly in an arbitrary manner to silence activists and websites by designating certain forms of criticism of the government as threats to state and public security. Furthermore, Russian authorities have been active in enforcing a 2013 law that prohibits the dissemination of information on so-called “non-traditional sexual relations,” also known as the anti-LGBT “propaganda” law. According to a 2017 report by Human Rights Watch, “authorities have unjustifiably blocked thousands of websites and prosecuted dozens of Internet users for expressing their views on ‘sensitive’ topics, including LGBT issues, Russia’s intervention in Syria and the armed conflict in Ukraine.” In December, 2016, for example, a blogger from Tyumen, Siberia, was sentenced to two and a half years in prison for “public justification of terrorism” after expressing criticism in a blog post against Russia’s involvement in Syria.

In addition, new surveillance provisions were passed under the Yarovaya Law in 2016. These require telecommunication companies operating in Russia to store the content of voice calls, data, images and text messages for 6 months, and the related metadata (e.g. time, location, sender and recipients of messages) for 3 years. Under these provisions, services that use encrypted data, such as messaging services, e-mail and social networks, are required to allow the Federal Security Service (FSB) to access and read their encrypted communications. Internet and telecommunications companies must provide this and “all other information necessary” to authorities on request, without requiring a court order.

A recent law passed in 2017, which came into force this year, bans the anonymous use of online messenger applications and prohibits the use of software that allows users to circumvent internet censorship, such as virtual private networks (VPNs). This kind of software is often used by activists, journalists and students to protect the privacy and security of their online activity and access censored sites.

Many Russians are currently uncertain as to what is considered acceptable speech and what could result in the imposition of a fine or even a prison term. In practice, these kinds of laws are not only adopted for their active implementation, but also to stoke fear among sectors that oppose the government and create a sense among the general population that anyone could be deemed a potential violator.

This dramatic increase in the Russian state’s infringement of the population’s rights of assembly and freedom of speech can only be understood in the framework of a general rise in popular discontent with the political, social and economic realities of the country over the past few years. The demonstrations held in 2011 were some of the biggest protests seen in the country since the 1990s and the protests continued in 2012 and 2013, despite the increased restrictions on freedom of assembly. Investigations into the corruption of top government officials, notably conducted by Navalny’s Anti-Corruption Foundation, have also increased opposition among the population, leading to mass protests last year that resulted in numerous arrests.

The brutal crackdown of the past few years has left many Russians skeptical about the possibilities for change. “Unfortunately for me, says Ekaterina, a human rights defender from St. Petersburg, “the question is only just how bad it will get.” Many others, however, have drawn hope from the fact that the struggles against government oppression are not only continuing, but have been spreading throughout the country. “Six years ago [the protests] were only in Moscow, St. Petersburg and Ekaterinburg,” says Andrey K., who participated in the protests last year. “Now they are all over Russia.”

When asked about the goals of this year’s protests and the prospects for the future, activist Andrei Z. was optimistic: “The aim of the boycott [of the elections] is to make Putin illegitimate. In the short term we can’t hope for success, but in the long term we hope this will wake people up from the propaganda spread on television.” Although it is unlikely that these protests will lead to a change in the election results, they have brought the attention of the country and the world to the illegitimacy of the regime and its elections and have shown the population’s enduring will to fight against the state’s oppression, despite the increasing risks involved.