Reproductive Rights are on the Ballot in Michigan

As socialists and radicals campaign to pass a ballot initiative to protect reproductive rights in Michigan, they must find a way to make that effort independent from the cynical electoral aspirations of Democrats. 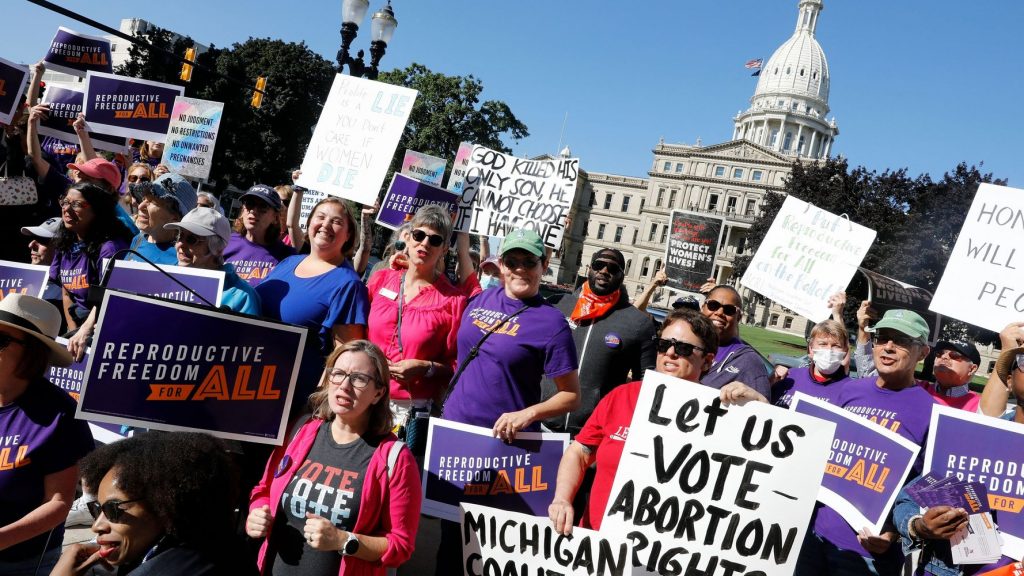 In Michigan, the fight for reproductive rights has encompassed a series of back-and-forth legal struggles. So far, Planned Parenthood and the Democrats have prevented the enforcement of a 1931 “trigger law” banning abortion and created a ballot initiative to repeal the ban entirely.

When the SCOTUS leak on Dobbs initially jeopardized reproductive rights, Planned Parenthood filed lawsuits challenging the legality of Michigan’s “trigger law,” which would ban abortion even in the case of incest and rape. The lawsuit secured an initial legal victory, when Court of Claims Judge Elizabeth Gleicher granted an injunction stopping the enforcement of the state constitutional ban on abortion. Judge Gleicher later ruled the law unconstitutional. Republican county prosecutors filed an appeal to that ruling to the Michigan Court of Appeals, which ruled that the ban did not apply to county prosecutors.  However, a 6th Circuit Court in Oakland County granted a temporary restraining order blocking the enforcement of the Court of Appeals ruling, citing that enforcement of the 1931 abortion ban would cause “…mediate and irreparable injury to the people of the state of Michigan”.

The next phase of the legal battle was around a state referendum repealing the 1931 ban on abortion. The Board of Canvassers, a four person panel composed of two Republicans and two Democrats tasked with certifying ballot initiatives, failed by a two to two partisan vote to certify the ballot initiative submitted by the Reproductive Rights for all Campaign. The Board of Canvassers was later ordered by the Michigan Supreme Court to place the referendum on the ballot, giving voters a chance solidify abortion rights in the state constitution.

An Election Campaign based on Fear of the Right

The Democrats have used these legal battles as ammunition for their own electoral campaign, presenting themselves as the only force that can successfully defend reproductive rights against the attacks by the Right.

According to a national PBS Newshour/Marist Poll, three-quarters (77 percent) of Democrats said that the Supreme Court’s decision makes them more likely to vote, and for independents it is 58 percent. These numbers show that the Democrats are in a much better electoral position than what was predicted six months ago. Biden’s approval rating is at 41 percent now, five percentage points higher than it was in July.

The Republican candidates for Governor and Attorney General – both of whom won Trump’s endorsement –  have a hardline position against abortion, supporting a national, total ban on reproductive rights. In fact, the Republican candidate for Attorney General, Matthew DePerno, believes that Plan B bills should be banned, and compared the medication to Fentanyl. These extreme positions are partly why both candidates are trailing behind the Democratic incumbent candidates by over ten percentage points.

Yet, we must not forget that Democrats have failed over the last few decades to solidify and entrench reproductive rights. As a young feminist in Detroit highlighted, “…Democrats had 4 presidencies, 4 opportunities to legalize and decriminalize abortion” and they failed to act each time. This makes Democrats fair weather friends of reproductive rights who cannot be depended on to fully defend let alone expand these rights.

Yes on Prop 3, No to the Democrats and Republicans

Socialists and radical feminists should certainly support the Yes on Prop 3 campaign, but must be explicit about the Democrats being a dead-end to the movement for reproductive rights in particular, and workers and oppressed people in general. The Democrats have made it abundantly clear, for example, that they will not defend trans youth who are under serious attack by the Right, and have tried their best to remove conversations about trans rights and trans people broadly from the conversation around reproductive rights. While the Democrats and NGOs who are campaigning for Yes on Prop 3 are prepared to talk about women of color, they refuse to fight for any of the reforms – like Medicaid for All – needed to ensure that working-class women of color who already had obstacles to obtaining safe abortions have more access to them.

Ultimately, the Democratic Party is a capitalist party, a fact that has been reiterated by both Biden and Pelosi. Therefore, they are not only incapable of eliminating exploitation and oppression, but also seek to actively maintain capitalism. Instead of opening up space for movements challenging capitalism to grow, the Democrats time and again intervene, with the help of the trade union bureaucracy and NGO’s, to shut down the movement and relegitimize institutions under intense and valid scrutiny. This is what they did following the George Floyd rebellion, by increasing police budgets and funneling the efforts of activists into dead-end reforms and the election campaign of Joe Biden.