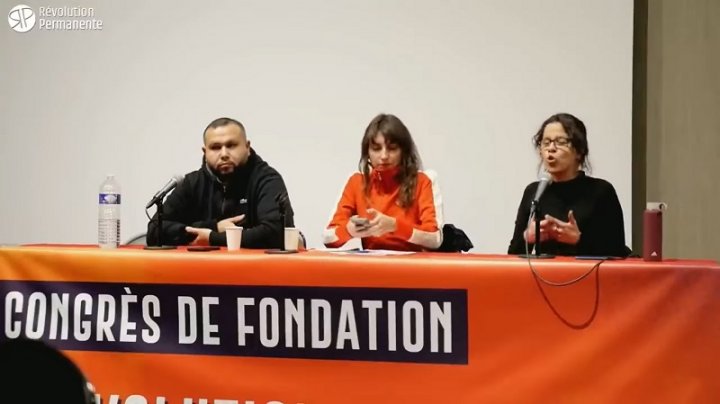 On Friday, December 16, 2022, the inaugural session of the founding Congress of Révolution Permanente, part of the Trotskyist Fraction and of the International Network La Izquierda Diario, was held in France. Numerous international delegations from Argentina, Brazil and other European countries were present, as well as various activists and intellectuals, together with the delegates voted to the congress.

During that day, Daniela Cobet, member of the leadership of Révolution Permanente, pointed out the reasons and the political context of the creation of a new revolutionary organization in France, which we reproduce below:

“Thank you comrades, on behalf of the leadership of Révolution Permanente I would like to thank all the guests who came to give their greetings, the delegates of this Congress, and also to greet the presence of the numerous international delegations who are here, and who, in my opinion, testify to the relative importance, though no less important, of this Congress being held today.

I do not think it’s escaping anyone’s notice that this is being held in a particular context, and in a way I believe that the enthusiasm in this room contrasts somewhat with the spectacle we have seen in the media over the last few days, which is that of a major crisis in the political and social life of the country. In fact, it is a major crisis of the left and also of the far left with the explosion into two parts of the New Anticapitalist Party (NPA), an organization in which we organized for many years and from which our exclusion a year and a half ago marked the beginning of the process that leads us today to the creation of an independent organization with the comrades of Révolution Permanente.

This split within the NPA was carried out by the historic majority of that organization, which in fact includes its spokesmen, in particular Philippe Poutou and Olivier Besancenot, and was made in favor of an agreement with La France Insoumise [LFI, Jean Luc Melenchon’s organization] at the very moment when the LFI project shows all its limits. The limits of a movement which has no class anchorage, is a “gaseous movement” as they claim themselves, and which pretends to be led by a supreme leader with an iron fist. For us, this project, which is in reality one of class conciliation embodied by LFI, is a dead end for the revolutionary movement, and that is why we are in full solidarity with the comrades who have pushed the C platform within the NPA [who at the recent Congress of that organization were against this policy of agreement with LFI] and who today are trying to prevent the complete dissolution of the NPA into neo-reformism.

This does not mean that we agree on everything, and it is not our style to hide disagreements. In fact, we have one of the primary disagreements with the approach of the comrades, and that is that we think that the task of the moment is not so much to continue the NPA but to overcome this experience; that is, to learn the lessons of the failure of a project launched some fifteen years ago, and which in fact has been a dead end for the construction of the revolutionary movement which has now reached its explosion.

If today we are in the process of creating a new revolutionary organization, it is because we are convinced that the task is precisely to go beyond this experience, not to continue building a broad party with an ambiguous strategy, but on the contrary, to advance in the construction of a revolutionary organization that is an element for the recomposition of a combative far left that is up to the task of meeting the events already taking place and which will continue to develop in the coming years.

On the other hand, the disagreements that we have with the comrades, and that we want to discuss, do not, from our point of view, prevent the search for a practical agreement for intervention in the class struggle, and I believe that the next period is going to offer us many opportunities, in particular with the struggle against the pension reform. And also, why not on the terrain of the elections when they come up? And for that, in fact, we are inspired by the Frente [de Izquierda y de los Trabajadores (FIT)] that our comrades [of the Partido de Trabajadores Socialistas, Socialist Worker’s Party (PTS)] are carrying forward in Argentina with other far left organizations, to participate together in the electoral arena and to make the far left be able to put their weight into the national debate. So we are going to discuss during our Congress the concrete content of the proposals that we will make to those comrades, and as soon as our Congress is over, we’ll offer a meeting to be able to explore different forms of collaboration with the comrades with whom we have been fighting for years within the NPA, in spite of our disagreements with respect to the liquidation of that organization. We think, in fact, that these are tasks of the revolutionary movement, of the reconstruction of the far left, which interest us all and we are fully interested in debating, but also in advancing practically together wherever possible. But our Congress serves above all to try to lay the foundations of a new revolutionary organization that will try, as we have done up to now, to intervene actively in the class struggle with a strategy to try to make real contributions to our class, contributions in terms of a program of self-organization, a program for struggle, a program to win, and at the same time an organization that wants to offer a militant framework to the many workers and youth who have been in the process of politicization and radicalization during the last cycle of the class struggle and who have not found their place in the current organizations of the far left.

All this in order to add our small grain of sand, modest but which we hope will be solid, in the construction of a great revolutionary party in France that will be the tool for the revolutionary victory of the workers against the bourgeoisie, in the sense that, although we may have the impression that since our departure from the NPA we have done a thousand things, including the enormous campaign of our comrade Anasse Kazib [to gather 500 endorsements from governors or mayors so that he could run as a presidential candidate], this Congress today is a starting point. The reality is that we said that this Congress is only the beginning and we are going to hear much talk, we hope, of Révolution Permanente, in the coming months and years, in the class struggle, but also on all terrains in the ideological struggles, in the discussions with the entire far left, to try to establish a revolutionary party that is up to the needs of our class.”

Originally Published in Spanish on La Izquierda Diario on December 22, 2022 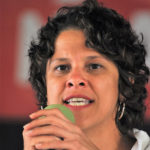 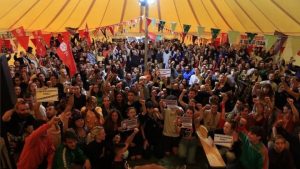