All Out for a Real General Strike! Down with the State of Emergency! Troops Off the Streets! For assemblies and coordinators to move the strike forward with a plan of struggle! For a free and sovereign Constituent Assembly imposed by the mobilization atop the ruins of the regime! This is a statement by the Revolutionary Workers Party (PTR), the Chilean section of the Trotskyist Fraction—Fourth International. 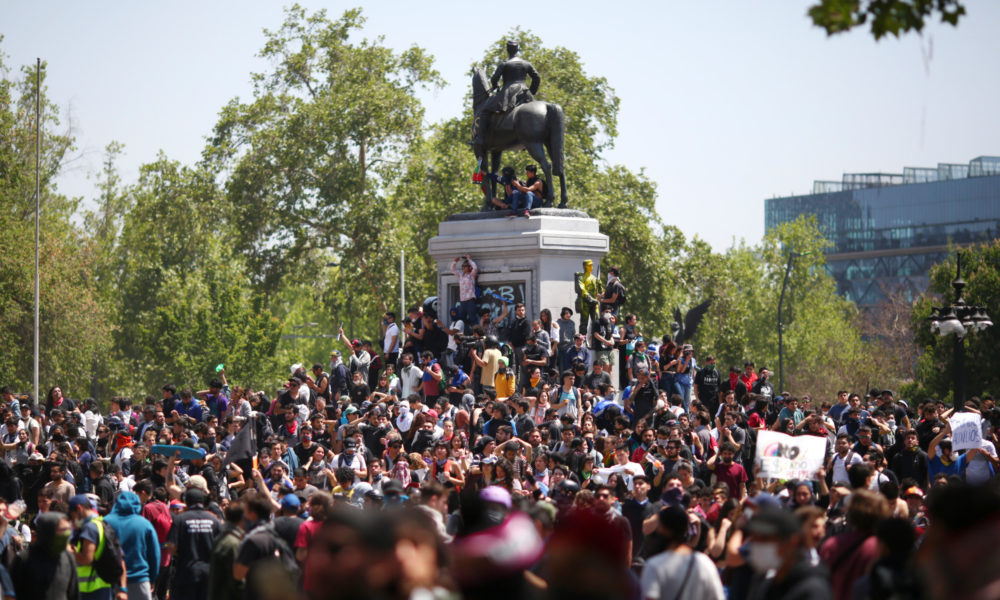 On Monday, October 21, massive street demonstrations took place throughout the country. In Santiago, more than 100,000 people mobilized in the Plaza Italia, despite brutal police and military repression. Together, these marches have affected all of Chile.

On Tuesday, thousands again congregated in the main squares in a resounding response to Piñera’s characterization of this as “war.” Not only the youth, but also the central battalions of the working class came out. The dockers mobilized, shutting down 90 of the country’s ports. The miners of Escondida paralyzed work in the world’s largest private mine.

A path has been opened for the working class and the student movement, which mobilized after holding assemblies. This unity in the streets, together with the rebellion among broad sectors of the population, is the road that must be followed. It is making the government tremble. The cry of “out with Piñera” grows louder and louder.

All this forced Piñera, on Monday, to ask for “understanding” for what he has said about “war,” while he floats the idea of “unity” based on discussing some “social” measures aimed at quelling the rebellion. His weakness is evident in his failure today to bring together the parties of the establishment for this “unity.”

These events have pressured the union bureaucracy of the the trade union confederation CUT , the alliance against the pension reform No+AFP, and the students’ union Confech to stop looking on from the gallery and call for a “General Strike” this Wednesday and Thursday, as various other groups had demanded. Originally, they had called for a “strike of empty streets,” without a mobilization. That is their real policy. But Monday’s massive mobilization forced them to reorient. We must push forward with this call and take it into our own hands to put Piñera on the ropes.

This call opens a scenario that encourages the intervention of the workers’ and mass movement, and raises progressive demands such as “out with Piñera,” an end to the state of emergency, for a Constituent Assembly, and for urgent social measures concerning wages and pensions. It does not, however, propose to take to the streets to overthrow this authoritarian government, but rather to “pressure” for a “dialogue” between the government and social organizations. The call aims for a deal with the parties and institutions of the regime to “repair democratic institutionality.” Using such a method, it will be impossible to win the demands that the organizers are raising. These are the same parties that have been in power for years, administering the legacy of the Pinochet dictatorship, and legislating on behalf of the bosses and the wealthy. We cannot trust them!

Although they call for a mobilization and a day of protest, they do not propose to deploy the full power of the working class through an active strike. They refuse to call for democratic self-organization, with assemblies, committees of struggle, and delegates from the schools and workplaces, to give continuity to the strike in order to overthrow the government—something that is absolutely posed. We demand the holding of open organizing meetings on Friday, October 25, to discuss how to continue the strike and formulate a plan of struggle.

No to the Institutional Trap! For a Free and Sovereign Constituent Assembly on the Ruins of the Regime

Faced with the weakening of Piñera, many politicians, businessmen, and parties of the regime are looking for a solution based on dialogue or concessions, hoping to divert the anger and struggle onto an “institutional path,” given the failure of the repressive solution that has been challenged in the streets. Some call for a reshuffling of the cabinet. Others propose partial concessions to “social demands” as a way to slow down and divert the struggle.

As for the old parties of the old Concertación coalition (which held the presidency from the time military rule ended until Piñera won in 2010), they initially legitimized Piñera’s curfew through a reactionary agreement in the National Congress. Now they have repositioned themselves, and this Tuesday promoted a “social platform” aimed at creating a “parliamentary diversion.”

The Communist Party and Frente Amplio (Broad Front), which lead the most important mass organizations, have called for this strike through the CUT and other organizations, under pressure from the streets. While they raise correct social demands, they use them to “pressure” for “dialogue” and to make agreements with the old institutions of the regime through unity with the parties of the old Concertación—experts at setting traps to divert us with false promises. Their strike is not aimed at defeating this government, this regime that is the inheritor of the dictatorship.

The Revolutionary Workers Party (PTR) calls for an active general strike, with assemblies, coordinating committees, and continuity, one that puts into motion the enormous power of the working class, together with the youth and the people—not with the objective of “dialogue with the government,” but rather to bring it down with the force of the strike and the streets, and to remove the military. That is the only basis for advancing so that our social demands are satisfied.

It is not about “out with Piñera” so that after that we can reach an agreement with the old institutions and the “opposition” that seeks to divert us away from the streets. It is about taking down the government through the methods of the class struggle. As revolutionary socialists, we fight for a workers’ government that breaks with capitalism and that socializes the means of production. We know that the majority does not yet share this perspective. That is why we propose, as an emergency measure given the situation, a Free and Sovereign Constituent Assembly that will open when the government falls, upon the ruins of the regime, with elected representatives, subject to recall, for every 20,000 voters. These representatives will earn a worker’s wage, and will come together to discuss, unhindered, all the emergency social and political measures that will benefit working people. It is in such an assembly that we will fight for a program that implements measures such as a minimum wage and pensions that meet basic family needs; public transit managed by workers and users, who will decide on the fares together with working people; free education and public health; the nationalization of the copper mines under workers’ management; and similar steps. And what is meant by “sovereign”? No other state institution will be above it.