Revolutionary Workers to the Constituent Assembly in Chile!

In late October, Chileans voted overwhelmingly to draft a new constitution. A constitutional convention will be elected in April. The bourgeois and reformist parties are hoping to rejuvenate the neoliberal regime. The Revolutionary Workers Party (PTR) is campaigning to defend the banners of last year’s revolt. 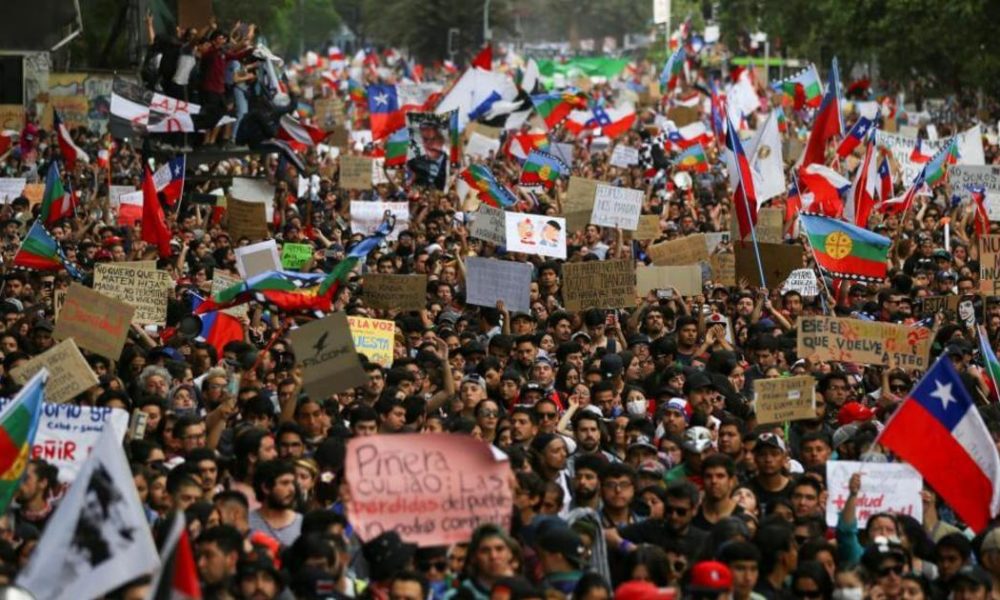 Chile’s constitution dates back to  1980 — it was written under the military dictatorship of Augusto Pinochet. In the 30 years since Pinochet left office, Chile’s democratic governments have maintained the neoliberal model that he put in place and additional neoliberal and authoritarian reforms have made the legacy of the dictatorship stronger than ever.

That legacy was shaken by the revolts that began on October 18, 2019. The initial spark was a 30-peso increase in ticket prices for public transport in Santiago — but as demonstrators said: “It’s not 30 pesos, it’s 30 years!” Millions of people took to the streets to demonstrate against the government of right-wing billionaire Sebastián Piñera. One of the main demands was for a new constitution. After a year of protests, on October 25, 2020, 78% of people who participated in a referendum called for a new constitution.

Now the different parties of the regime — grouped in the right-wing alliance Chile Vamos (Let’s Go Chile) and the center-left Unidad Constituyente (Constituent Unity) — are promising that the change that millions of people have demanded can come through elections. At the same time, they are trying to maintain the power of a handful of wealthy families and multinational corporations that control the country.

All the parties, even the supposedly left-wing Frente Amplio (Broad Front), signed an “Agreement for Peace and a New Constitution” and voted for laws that criminalize protests. Many demonstrators denounce this agreement for having been signed behind the backs of the people. The Communist Party of Chile (PCC), for its  part, did not sign the agreement — but it used its leading influence in the Workers United Center (CUT) to demobilize the protests. This formally communist party has a long history of seeking accommodations with social democratic governments. Chileans refer to this as the “cocina” — the “kitchen” where politicians from across the political spectrum make their corrupt deals.

Many people who participated in the rebellion point out that this is not a true constitutional assembly; it requires a decision be made by a two-third majority, to give a minority veto power in order to block real changes. It is a fraud by the established parties to preserve the neoliberal model and guarantee impunity for the forces of repression that tortured and killed protesters.

So how can the movement defend the “Banners of October”? The working class needs to constitute itself as an independent political force to fight for healthcare, bread, and housing. This is what the Revolutionary Workers Party (PTR) is attempting with an election campaign.

Their program calls for ripping out the neoliberal legacy of Pinochet at the roots. This would mean nationalizing the privatized systems of pensions, health care, and education under the control of the working class, eliminating precarious employment and guaranteeing a living wage for all, reducing the working day until everyone has a job, granting self-determination to indigenous peoples, and ending the plunder of natural resources.

The PTR is running in the elections to agitate for this program and strengthen the struggles for these demands, since there is no way to implement it in the framework of this regime. It requires self-organization and mobilization of the working class and the poor masses. The perspective of a general strike is critical to throw out the government. The workers and the oppressed of Chile have shown that they can shut down the entire country — more than once. They can express that strength in a Free and Sovereign Constituent Assembly to refound the country.

Reformist forces like the Frente Amplio and the Communist Party argue that it would be possible to break with neoliberalism within the framework of the existing state institutions. This is a completely utopian project — especially at a time when capitalism is throwing society into new crises. The only way to end neoliberalism is to expropriate the capitalists, destroy their state, and install a workers’ government.

The PTR is calling on all the workers and young people who took part in the rebellion to support this campaign. The PTR was able to get signatures in Chile’s largest cities to present candidates to the elections. The candidates include:

This campaign is intended to send out a strong signal: the capitalists must pay for their crisis. As the PTR writes:

For us, the different struggles and our participation in the elections of April 11 should serve to strengthen a political alternative and a program of class independence — one that is socialist and revolutionary. Without a program like that, even if we are in the streets and even if we run in the elections independently, we would be dancing to the music of reformism.

This article is based on an article in Spanish on our sister site Izquierda Diario Chile. The PTR’s program for the elections is also available in Spanish: Por Salud, Trabajo, Pan y Vivienda.