“Right-to-Work” Laws Are an Assault on Union Organizing

The closed shop is a powerful weapon of the working class. This week, legislatures in Montana and Colorado defeated efforts to turn their states into anti-union right-to-work states like Alabama, where Amazon workers in Bessemer are fighting to form a union. 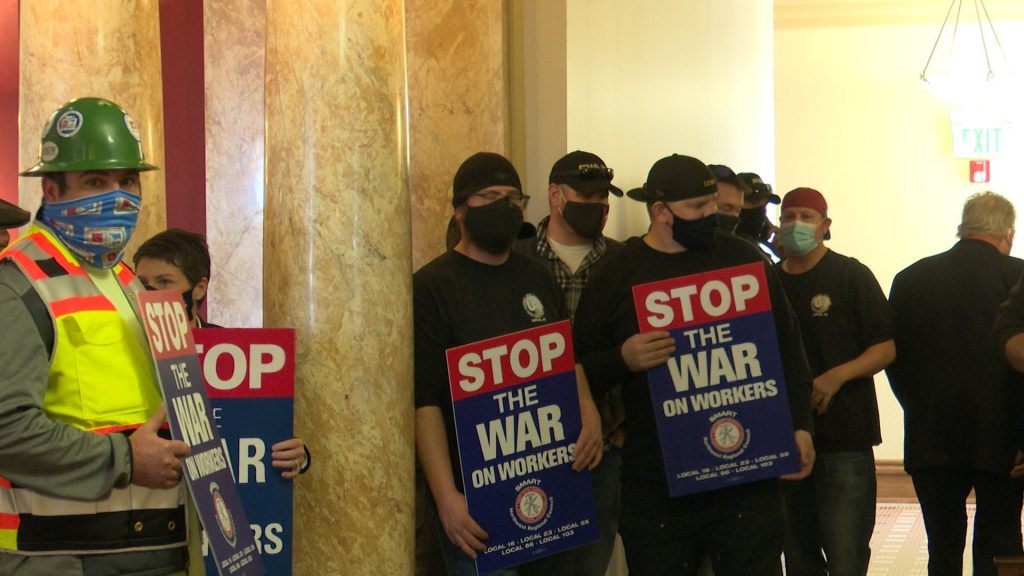 On Tuesday, March 2, the Montana state legislature — controlled by Republicans — failed to enact House Bill 251, which would prohibit the requirement of belonging to the union as a condition of employment in workplaces that have been unionized. In addition, the bill would have barred private-sector unions from requiring non-members covered by collective bargaining agreements to pay union dues. Union members filled the gallery and lined the hallways of the Capitol as the debate unfolded. In the end, 29 Republicans joined 33 Democrats to oppose the bill.

The previous week, on February 25, HB21-1049, a bill in the Colorado House of Representatives, was defeated in committee and failed to make it to the floor for a vote of the full legislature. Like the Montana bill, it took aim at unions by making it possible for workers to opt out of union membership at their unionized workplaces. Mark Thompson, a member of the United Brotherhood of Carpenters and Joiners of America testified against the bill before the committee. “This is union-busting legislation — it always has been, always will be,” he declared. “This is strictly to weaken unions.”

Both bills are so-called “right-to-work” laws, which seek to outlaw one of the powerful weapons in the arsenal of labor unions — the closed shop, where every worker who gets hired must join the union (even if sometimes it happens after a probationary period). A closed shop is like a closed fist: once a union organizes, its power comes from the united front of all workers it represents and the inability of the bosses to unclench that fist. Without the closed shop, employers have an easier time sowing divisions among workers and trying to pit workers (union members and non-members) against each other, just as they probably tried to do during the union election.

Make no mistake about it: the votes in the Montana and Colorado legislatures are victories — even if relatively small ones — for the entire working class. The average worker in a right-to-work state makes 16.6 percent less than in states without such laws, with significantly larger wage gaps between men and women, according to the Economic Policy Institute. And as a group, right-to-work states have higher rates of poverty and higher percentages of people lacking health insurance. The Montana and Colorado results show the power of the unions when they organize workers en masse to protest. It’s the same lesson from the protests in Madison, Wisconsin, in 2011 that brought out 100,000 public-sector workers to oppose the legislature’s efforts to bust their unions.

In 1936, an oil industry lobbyist in Houston founded the Christian American Association (CAA), which took up a plethora of right-wing causes — including strong opposition to integration. Notably, its funding came largely from oil companies throughout the South and wealthy industrialists from the Northeast, which helps explain why the CAA also became the first U.S. organization to promote the idea of “right-to-work” as a political slogan.

Anti-union right-to-work laws originated as a way to keep Black and white workers from organizing into the same “integrated” unions. The 1930s were a period of intense organizing drives by the Congress of Industrial Organizations (CIO), and there was a lot of success in Texas. And the CIO wasn’t just fighting for better wages and working conditions; they also openly opposed Jim Crow and demanded an end to segregation.

The CAA, with backing from the Southern States Industrial Council, got its first union-busting law passed in 1941 in Texas: an “anti-violence” bill that restricted picketing by unions at workplaces. The law was largely replicated across the South over the next two years, helped by anti-strike sentiment as World War II raged. The CAA decided its test had worked, and moved on to overturning the closed shop.

The 1935 National Labor Relations Act had permitted closed shops, if a union could negotiate that status with the employer. In 1945, the CAA and its allies tested that idea in Texas, introducing a right-to-work bill that passed the Texas House but lost in the Senate. Two years later, the same forces tried again — aided by internal divisions between the CIO and the American Federation of Labor (which wouldn’t merge for another eight years) — and succeeded. The Texas right-to-work bill was signed into law.

That same year, the U.S. Congress overrode a presidential veto to pass the Taft-Hartley Act, which — in its infamous section 14(b) — authorized individual states to outlaw the closed shop. By the end of 1947, another 13 states joined Texas in enacting right-to-work laws.

Today, some 27 states — all in the South, Midwest, and Intermountain West — are right-to-work states. The existence of these laws, while not the only reason for the overall decline in labor union membership across the United States, have played an enormous role in keeping unions out of many sectors, especially those largely based in one specific region (such as the textile industry in the South).

Alabama was one of the states that followed the CAA lead in Texas, adopting its “anti-violence” bill in 1943 and its right-to-work law in 1953 — later enshrining it in the state constitution in 2016. It is a factor in the struggle at the Amazon warehouse in Bessemer, where workers are now voting on whether to organize a local of the Retail, Wholesale and Department Store Union (RWDSU).

The Bessemer struggle is notable for its potential to spark a resurgence in union organizing generally, and especially in sectors long ignored by the labor movement. Union membership in the United States has declined to about 11 percent of the workforce, down from 30 percent of the non-agricultural workforce in 1964.

But it’s also notable because it’s unfolding in a right-to-work state, and a Southern one at that, at a facility with about 85 percent Black workers. The New York Times characterizes the vote as “a referendum not just on working conditions at the Bessemer warehouse, which employs 5,800, but on the plight of low-wage employees and workers of color in particular. Many of the employees in the Alabama warehouse are Black, a fact that the union organizers have highlighted in their campaign seeking to link the vote to the struggle for civil rights in the South.”

Even just waging a fight like this in the right-to-work South is unprecedented. “The significance of a union victory there really couldn’t be overstated,” Benjamin Sachs, a professor of labor and industry at Harvard Law School, told the Times. For instance, Alabama is the home to the only Mercedes-Benz plant in the entire world that isn’t unionized.

Voting by Amazon workers in Bessemer ends at the end of this month. In the few weeks left, workers from Colorado and Montana, and indeed from across the country, need to step up and do everything possible to support the Alabama struggle. So, too, should the Black Lives Matter movement. The brutality Black people are subjected to in the streets by cops is the other side of the same coin that subjects them to double oppression on the job — as people of color and exploited workers. Winning a union at Amazon in Bessemer should be the fight of the entire working class.