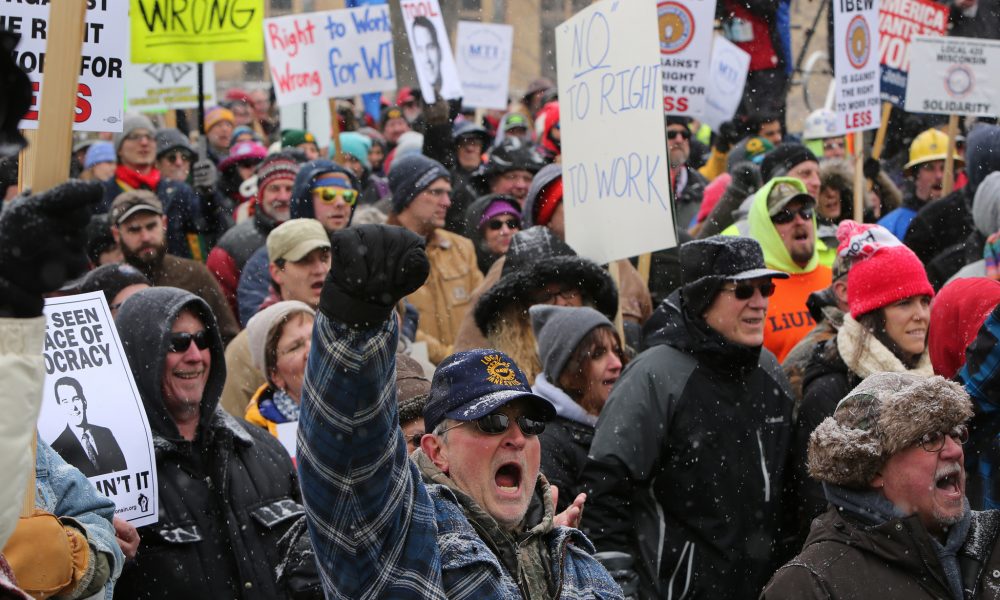 Image from The Chicago Tribune

High at the top of the GOP and big business wish list for the New Year is a National Right-To-Work (RTW) law aimed at gutting the ability of the unions to finance themselves and fight back against the bosses’ agenda. These laws, with their roots in the Jim Crow segregated South, have spread to 26 states. In every state where RTW has passed, the income of working class households has fallen and the unions have been weakened by attacking the unions’ dues base and the union shop.

The campaign for RTW began in the South, where reactionaries played on the fear that unions would lead to “race-mixing and communism.” Fourteen states passed RTW legislation by 1947, the same year the Taft-Hartley slave labor bill was enacted by Congress. One provision of Taft-Hartley made it legal for states to pass so-called Right-To-Work laws. In all, 26 states have passed such laws. Recently, a Federal appeals court ruled that counties in Kentucky could pass their own RTW legislation, following the failure of such a measure to pass at the state level.

With the ascension of Trump to the White House and Republican majorities in both Houses of Congress, the danger of a national Right-To-Work Law is very real. Trump, playing the populist during the campaign, talked up his support for hard working union members. At the same time he was clear about his support for RTW.

“”We’ve had great support from [union] workers, the people that work, the real workers, but I love the right to work,” Trump said.”I like it better because it is lower. It is better for the people. You are not paying the big fees to the unions. The unions get big fees. A lot of people don’t realize they have to pay a lot of fees. I am talking about the workers. They have to pay big fees to the union. I like it because it gives great flexibility to the people. It gives great flexibility to the companies.”

The passage of a National RTW law would be culmination of 30-plus years of a one-sided class war against US workers. This union busting frenzy kicked into high gear with Reagan’s destruction of the PATCO air traffic controllers’ strike and has continued as unions have been pushed to the wall with demands for concessions.

Fighting RTW has to one of the main priorities of the labor movement and the left in the coming period. Our goal should not be limited to stopping this reactionary anti-worker legislation. Instead, we should be strategizing a road forward that rolls back RTW and builds union power in the workplace and society.

We have to turn the defensive struggles against the attacks on workers and the oppressed into an offensive against the capitalist system. Continued subordination of the unions to the Democrats only helps to reinforce our weaknesses. We can’t depend on capitalist courts or politicians to defend us. It is only through the independent self-organization of working people that we can prevail.

Mass mobilization, united front mass actions and political independence are crucial elements of a fight back. Looking at the struggle in Wisconsin against anti-worker legislation put forward by Scott Walker, the labor movement and its allies hit the streets and occupied the Capitol in defiance of court orders and intimidation. The movement faltered when it was diverted into campaigns for Democrats — some of them with poor records on labor questions.

In the struggle against Trumpism, we should give our trust only to reliable allies. Too often, Democrats have taken money and support from unions only to stab us in the back later. Tim Kaine’s support for RTW is one example. Another is Democratic NJ Senate President Steve Sweeney’s alliance with GOP Governor Chris Christie’s attack on New Jersey public employees. Sweeney, an official of the Ironworkers’ International union, scabbed against teachers and state workers in a detestable manner. Too often, private-sector unions have lined up against public sector unions. Building real solidarity, including unconditional support for the struggles of other workers, is essential.

This article was originally published in Resistance