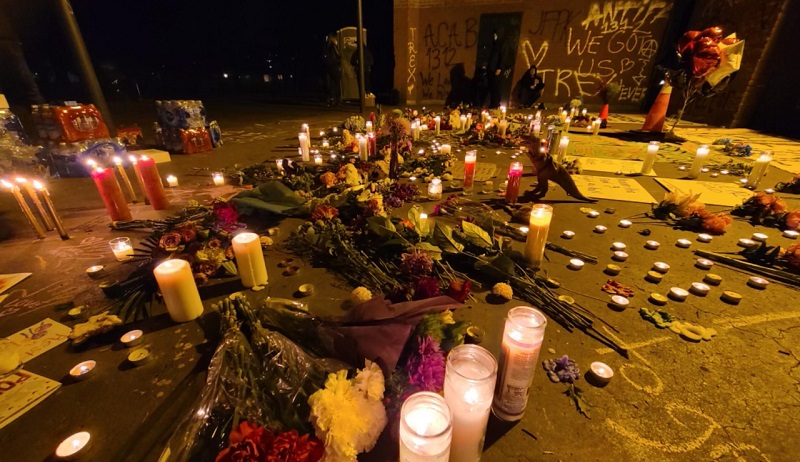 On Saturday evening an a man opened fire on several Black Lives Matter demonstrators in a Portland, Oregon park. A man identified as Benjamin Smith is under investigation for this hateful act. The demonstrators had been gathering at Normandale Park for a march in protest of the police killing of 22-year-old Amir Locke in Minnesota earlier this month. This is not the first instance of right-wing vigilantism against BLM protesters and probably will not be the last.

One of the shooting victims, who chose to remain anonymous out of fear for her safety, said that she and three other women had been assisting with traffic safety when a man angrily approached them, yelled at protesters for being in his neighborhood, and within seconds opened fire. So far June Knightly, a 60 year old woman is dead and 4 other people have been hospitalized.

Portland was the site of one of the most intense and courageous confrontations against the state by Black Lives Matter protesters in 2020. Multiracial contingents of youth, as well as brigades of moms and dads, faced off against federal troops, right wing supremacists, and other reactionaries for months.

Portland Mayor Ted Wheeler, a Democrat, has continuously criticized BLM protesters, creating a political atmosphere that has effectively encouraged and legitimated attacks against protesters for years. Wheeler has asked citizens to “stand up” to “violent demonstrators,” and has repeatedly encouraged city residents to take their city back and to partner with the police to stand up to protesters. “The city of Portland will not tolerate criminal destruction or violence. Those who are engaged in it, lets make it hurt them a little bit,” he said.

According to witnesses, the police harassed and abused protesters and assaulted medics who were helping the injured. The Portland police have also attempted to blame witnesses for the “lack of cooperation” with police. The police response to this murder and to the working and oppressed in Portland has only made matters worse for those injured and traumatized by this shooting.

This was clearly a targeted attack on protesters, not an instance of random gun violence, as Parks Commissioner Carmen Rubio claimed. In fact the attempt to frame this as being about an increased level of gun violence is a further deflection from the political nature of the attack. Just as they are in Portland, politicians around the country are trying to frame “high crime rates” as a way to increase budgets for police and justify racist police practices. The police do not prevent crime. They are paid to protect the rich and enforce capitalism and its bigoted ideology.

But this attack is also happening within the context of a broader increase in right-wing vigilantism, of which the Kyle Rittenhouse shooting is perhaps the most well-known instance. In many ways in fact, this attack is the result of the failure of our system to hold such vigilantes accountable.  The acquital of the racist murderer Kyle Rittenhouse was a green light for further attacks, and this shooting is just the latest example. The Democrats and Republicans are united in deflecting their unpopularity onto Black Lives Matter activists, but neither party can resolve the issues plaguing the working class and oppressed because both parties represent the capitalists, the cops, and the bigots.

Left Voice stands in solidarity with the working people of Portland and all those who are protesting police violence. We call for the name of the murderer to be released and we condemn the anti-BLM agitations by Mayor Wheeler, as well as any legal persecution of protestors by the state.

To give financial support to victims and their families you can contribute here.

This story was updated on 2/22